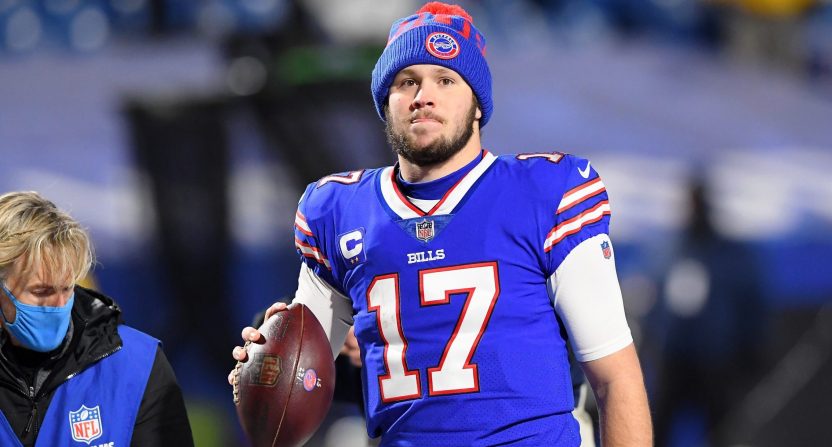 During the past week, Buffalo Bills fans have faced some uncertainty as to whether or not their team will continue playing in the City of No Illusions as owners Terry and Kim Pegula plead for a new stadium.

Yet no matter where the Bills end up playing football after 2023 (when their current lease at Bills Stadium expires). and regardless if their name would change as a result of, say, moving to Austin, Josh Allen will be the team’s quarterback.

Going into his fourth NFL season, Allen agreed to a six-year contract extension that could be worth up to an astounding $258 million. At the very least, he’ll earn $150 million in guaranteed money from the deal.

Compensation update on Josh Allen new deal that @mortreport reported on: it’s a six-year deal worth $258 million, including $150 million guaranteed, per source. https://t.co/KXcgliKYAI

Allen was already under contract through the 2022 season after the Bills picked up his fifth-year option for $23 million. But the team and its signal-caller had eyes on a longer-term commitment, setting Week 1 (Sept. 12) of this season as a deadline to negotiate an extension.

The gargantuan extension places Allen second among the highest average annual salary and total contract value among current NFL players. The Bills QB will earn $43 million per season, only looking up at Patrick Mahomes’ $45 million average per year. And Allen’s $258 million deal is only surpassed by Mahomes’s $450 million package (with the possibility of increasing to $503 million) that he signed with the Kansas City Chiefs last year.

Dak Prescott of the Cowboys, the Texans’ Deshaun Watson, and Matt Ryan of the Falcons round out the top five.

Allen took a major step forward in his third season, breaking out for 4,544 yards passing and 37 touchdowns. Accuracy has always been a knock on him since coming out of Wyoming, but Allen completed 69 percent of his passes in 2020. He finished among the NFL’s top five in yards, touchdown passes, completion percentage, and quarterback rating.

Most importantly, Allen led the Bills to a 13-3 record — tied for the second-best mark in the league — the team’s first AFC East title in 25 years, and the AFC Championship Game (losing to the Chiefs, 38-24). The team’s performance and his impressive numbers earned him a second-place finish in NFL MVP voting behind Aaron Rodgers.

Following two seasons during which Allen’s status among the top NFL quarterbacks could be doubted, he established himself as one of the league’s top players in 2020. And now, he’s being paid as one of the best.

The question now becomes whether or not Allen and the Bills are Super Bowl contenders. Obviously, the Chiefs are a significant obstacle in the AFC. Buffalo’s defense ranked 14th in the NFL in yards allowed. That unit doesn’t appear formidable enough to contain or harass Mahomes as the Buccaneers did in the Super Bowl, which has to be the standard, right?

General manager Brandon Beane addressed the pass rush in the draft, selecting Gregory Rousseau and Boogie Basham with the team’s first two 2021 selections. But should they have pursued an impact edge rusher such as Shaq Barrett, Bud Dupree, Yannick Ngakoue, Matt Judon, or J.J. Watt in free agency?

Have charted 57 RBs for yards created over the last five college seasons. Zack Moss (2.4) is 3rd-best in yards per route run behind Joe Mixon (2.9) and Alvin Kamara (2.8).

On offense, Buffalo’s running game has to be a concern. Allen was the team’s third-leading rusher with 421 yards. That’s not ideal. Devin Singletary regressed in his second season, rushing for 687 yards. Zack Moss added 481 yards on the ground, but didn’t emerge as a featured running threat either.

Though Allen can obviously be an effective runner, something opposing defenses need to consider when the pass rush breaks down or receivers downfield are covered, 102 attempts (fourth-most among NFL QBs) resulted in him taking more of a pounding than the Bills surely prefer.

To be fair, Najee Harris and Travis Etienne were drafted before Buffalo’s first-round selection came up at No. 30. And no impact running backs that were a clear upgrade were available in free agency. So increased production from Singletary and Moss might be what’s necessary to avoid Allen and the Bills’ passing game carrying such a heavy load again. More offense might be what’s required to defeat the Chiefs in the playoffs, as opposed to somehow stopping them on defense.

Facing those circumstances, it’s a good thing that the Bills made sure their quarterback isn’t going anywhere. Allen is their best chance to get to the Super Bowl.