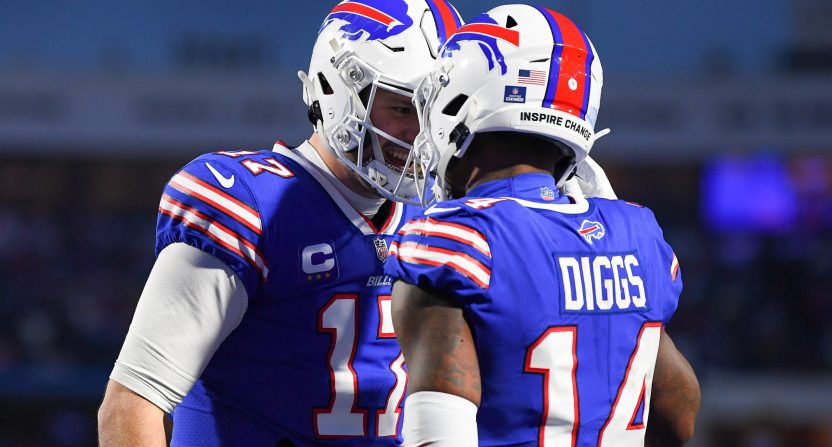 Dallas Cowboys cornerback Trevon Diggs and Buffalo Bills wide receiver Stefon Diggs are two of the best players at their position, but it appears that there may be a bit of a brotherly rivalry between them.

Trevon was asked on Friday about a possible Super Bowl matchup against his brother and made an extremely bold claim that Stefon would not catch one pass against him if they were matched up with the biggest stakes on the line.

It appears that this interview got the attention of the Buffalo Bills, with Stefon and quarterback Josh Allen discussing the comments from Trevon during an interview after Bills training camp on Saturday.

Allen chimed in on a potential matchup between the two and gave an even bolder prediction for how it would go down.

And now the response from Stefon to Trevon today at #Bills camp on #BackTogetherSaturday. Well actually, the response from Josh Allen, who says it would be double-digit catches, triple-digit yards and multiple TDs. pic.twitter.com/4ZG1lRS3QX

The two brothers have not played against each other at the NFL level yet, so it would certainly be interesting to see how it would play out between them. It’s rare when two brothers are at the star level that both Trevon and Stefon currently are, so it would be a must-watch matchup between the two.

Unfortunately, the Bills and the Cowboys are not set to play each other this upcoming season, so it would take a Super Bowl matchup for the two to face off against each other. That being said, it certainly seems like Josh Allen welcomes the challenge of Trevon Diggs and the Dallas Cowboys with open arms in a potential Super Bowl matchup.