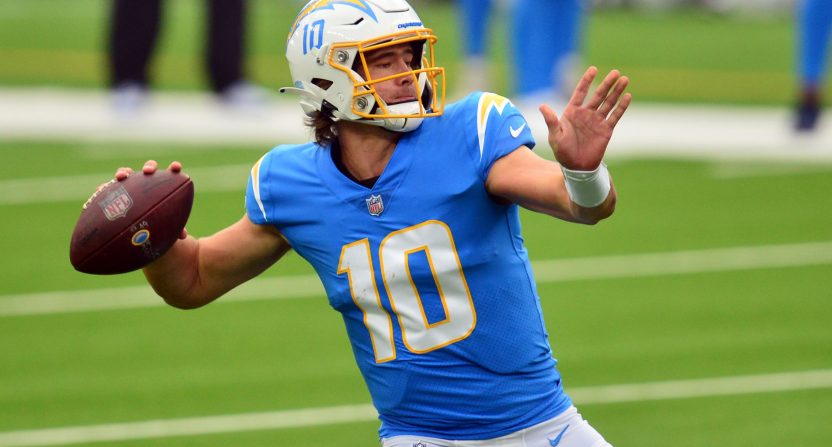 The Los Angeles Chargers improved to 2-4 with a 39-29 victory over the Jacksonville Jaguars on Sunday. The record isn’t anything exciting, nor is a victory over the Jaguars. But the Chargers have plenty of reason to be thrilled with their current situation, and a large amount of NFL organizations would gladly trade places with Los Angeles right now. That’s because the Chargers appear to have found their long-term quarterback, and potentially a superstar at the most important position in sports.

Justin Herbert completed 27-of-43 passes for 347 yards (8.1 AVG), three touchdowns, and no interceptions in Sunday’s victory. Herbert showed off a very impressive combination of arm strength and accuracy throughout the day, making several big-time throws that make scouts drool.

.@Chargers take the lead on the TD to Virgil Green. #NationalTightEndsDay

Herbert is the only quarterback with 3+ deep touchdown passes in a game this season.#JAXvsLAC | #BoltUp pic.twitter.com/SAbBdJcFk8

It’s not just the passing either; Herbert is a very good athlete and impactful runner, even at his 6’6″, 236-pound frame. He had nine carries for a Chargers-best 66 yards (7.3 AVG) in the win, including a touchdown run and a run of 31 yards.

Just like that… the @Chargers have the lead! #BoltUp

And while this is his first victory as a starter, Herbert has been playing good-to-great football in all five of his games. Overall, he’s thrown 12 touchdown passes and three interceptions, with a 108.1 passer rating

Herbert took Patrick Mahomes and the Kansas City Chiefs to overtime in his NFL debut, while putting together a 94.4 passer rating. He lost by just seven points on the road against Tom Brady and the Tampa Bay Buccaneers, while putting together a 137.9 passer rating. He was the best player on the field — four touchdowns, zero interceptions, and a 122.7 passer rating — in the Chargers’ heartbreaking overtime loss to the New Orleans Saints on Monday Night Football.

A star in the making.

Herbert is the 1st Chargers QB with 3 Pass TD and a Rush TD since Dan Fouts in 1983 pic.twitter.com/8NxbMZM4cz

NFL organizations and draft evaluators were very aware of Herbert’s *talent* and *upside* following his career at Oregon, but there were concerns about his consistency, instincts, and various perceived weaknesses. And it was assumed that he would enter the league fairly raw, with a potential lengthy learning period.

Well, Herbert shockingly looks like he’s been in the league for years (his poise in the pocket has been particularly impressive), and already appears to be reaching the tantalizing assumed upside- which makes you wonder just how good he could be, if he’s already this good just five games into his NFL career.

The Chargers may be outside of (realistic) playoff contention this season, but they appear to be in great shape in the coming years with Herbert at quarterback. That goes beyond just his quarterback play; having a starting quarterback on a rookie contract allows an organization to use their resources to address other needs, which is a huge advantage. The Chargers should be able to surround Herbert with impact talent over the next few years, and perhaps they can provide a real AFC West threat to Mahomes and the Chiefs in the not too distant future.