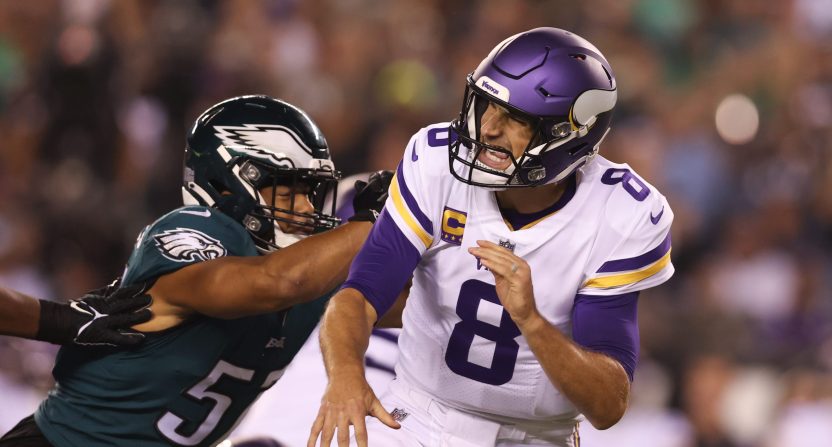 Heading into Monday’s game against the Philadelphia Eagles, Minnesota Vikings quarterback Kirk Cousins didn’t have a sterling reputation for playing well in primetime games. He was 10-17 in all primetime and 2-9 on Monday Night Football. His most recent performance in Philadelphia didn’t do anything to improve either his reputation or record.

The 24-7 final score indicates that several Minnesota players performed poorly, which is true. But the quarterback’s performance on Monday was abysmal. Cousins finished the day 27-for-46 for 221 yards and 61 of those yards came in the final drive against a prevent defense. He also finished the day with one touchdown and three interceptions.

The first two picks came in the third quarter, with the Vikings in a position to potentially get back into the game.

With Minnesota in the red zone and trailing 24-7, Cousins threw a pass to Justin Jefferson in the end zone. At least, that’s what we think he was trying to do. Philadelphia’s Darius Slay looked like the true intended receiver and came away with the interception.

The Eagles pick off Kirk Cousins in the red zone! 🏈 #MNF pic.twitter.com/h6iIQO2Eyt

On the ensuing possession, The Eagles were poised to add to their lead but Patrick Peterson blocked a field goal and Kris Boyd returned it deep into Philadelphia territory. Again, the Vikings had a chance to cut the deficit. Again, they came away with nothing. Cousins threw his second pick of the night, this one to Avonte Maddox.

Those two interceptions effectively ended the game. But a Jordan Hicks interception gave the Vikings a chance to cut the deficit in the fourth quarter. It could have conceivably helped Minnesota mount a miracle comeback but short of that, it was a chance for Cousins and the Vikings to finish the game on a positive note. That’s always good, especially heading into a short week. But it was not to be.

Cousins attempted to find Jefferson in the end zone. Only Slay came down with it for his second interception of the night and Cousins’ third.

Kirk Cousins has once again been intercepted by Darius Slay. Rinse and repeat. 🏈 #MNF pic.twitter.com/pBxb1k8G86

Cousins was blasted for yet another subpar performance under the lights of primetime.

Kirk Cousins agent is the GOAT!

Keep throwing it wherever the hell you want to Kirk.

Kirk Cousins is only good when nobody is watching. It’s amazing how on brand he is all the time.

If you’re a fan of the Vikings or Cousins, we have good news for you. Minnesota does not have another Monday Night Football game on the schedule for the rest of the season. The Vikings will, however, be in prime time again on Thanksgiving, when they host the New England Patriots.