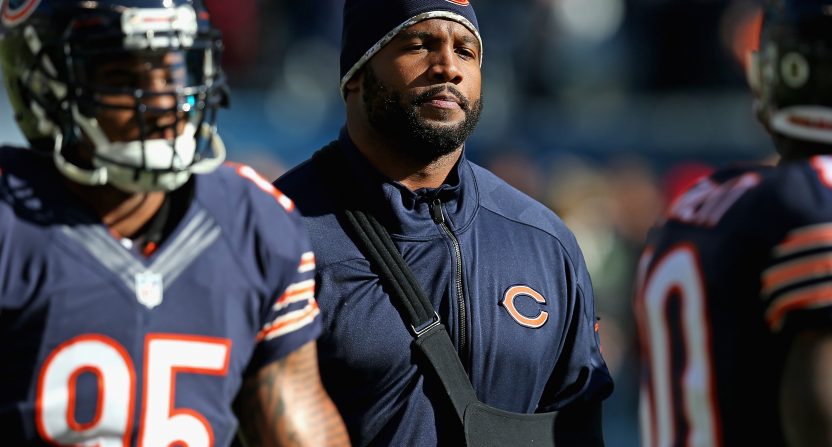 For about a decade, Lance Briggs was one of the best and most consistent linebackers in the NFL. He played in a Super Bowl in 2007, and alongside Brian Urlacher helped anchor a very good-to-great Bears defense from 2005-2012. But being a great player doesn’t exempt you from dealing with the after-effects of time in the league.

Briggs helped produce an original production for sqor.com called “Lance Briggs-Time of my Life”, in which he describes having the symptoms of CTE, which for him includes short-term memory loss, difficulty thinking, aggression, motor impairment and suicidal thoughts.

“I enjoyed every minute of football. I didn’t feel like I was in the game until I got a good pop. Either I got popped or I popped somebody. You’re not supposed to be doing the things we’re doing to our bodies,” he said.

“CTE affects guys in a different way, and you start seeing it even in the practice of football. You get worried. I get concerned for myself. And even though I’ve never had any suicidal thoughts, or anything like that, for it to happen to some great men, and great football players, I know that I can’t separate myself from that crowd.”

Briggs admitted that he thought it would be a matter of time before he started to feel symptoms of CTE, and also admitted in a recent interview that he is a bit scared about what might lie ahead for him.

“It does scare me, because a lot of men that played the game, have taken their lives. There’s a heavy percentage of them that are linebackers,” he added.

For Briggs, part of coping and dealing with the symptoms is raising awareness about CTE and what it can do to former football players, as well as staying as active as possible and keeping his brain working as hard as possible.

“For me, it’s important to stay active, keep feeding my brain.”

Sqor is also selling a “time of my life” t-shirt, with portions of the funds going to brain injury research.