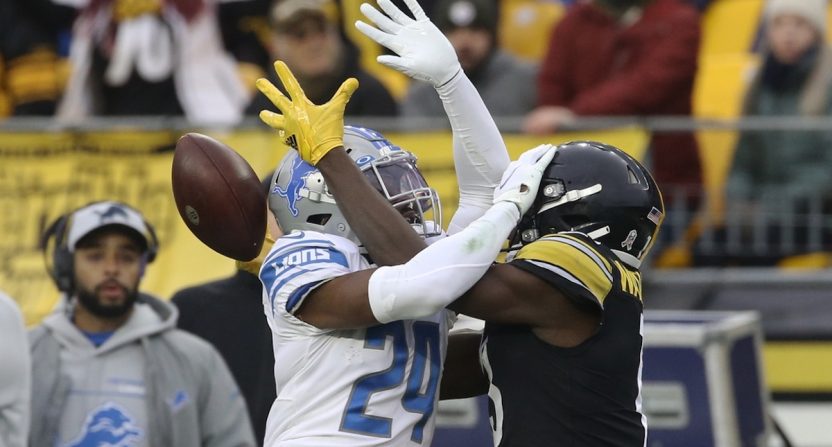 For the first time in the 2021 NFL season, the Detroit Lions did not lose a game.

But they didn’t win either, finishing their Week 11 matchup against the Pittsburgh Steelers in a 16-16 tie. Really, no one who watched the display of football ineptitude at Heinz Field on Sunday — with presumably even more viewers, thanks to NFL RedZone and NFL Sunday Ticket — won either.

Under rainy conditions, footing was soft, throws were short, and the football itself was slippery. That may have been best demonstrated with a fumble by Steelers tight end Pat Freiermuth with eight seconds remaining in overtime, costing Pittsburgh a chance at a game-winning field goal.

The Steelers fumble with 8 seconds left in OT and the @Lions recover 👀 #DETvsPIT pic.twitter.com/zu4rY1MqVU

The Steelers were only in position to win the game because Lions kicker Ryan Santoso missed a 48-year field goal earlier in the overtime period that would’ve given Detroit the victory. Santoso’s kick may have gone 45 yards, falling short in an ugly attempt that was entirely appropriate for this game.

Santoso was added to Detroit’s active roster from the practice squad after regular kicker Austin Siebert was placed on injured reserve. The kicker also missed an extra point after the Lions’ second touchdown that would’ve allowed everyone involved — spectators included — to avoid the misery of this game going to overtime.

Pittsburgh’s offense struggled with backup quarterback Mason Rudolph, playing because Ben Roethlisberger was assigned to the reserve/COVID-19 list. And the Lions offense has been unproductive all season with Jared Goff at quarterback.

Mason Rudolph vs. Jared Goff should have a parental guidance warning. Kids shouldn’t have to watch this. It’s truly obscene.

MASON RUDOLPH WITH AN ABSOLUTE HEATER OF A THROW RIGHT HERE 🔥 pic.twitter.com/xIdjLncZxh

jared goff and ben roethlisberger are going to exchange signed passing maps after the game pic.twitter.com/dE6RaEh4lW

Goff threw for only 114 yards, despite playing five quarters of football. Rudolph threw for 240, yet needed 50 passes to get there (completing only 30 of them). Neither Lions coach Dan Campbell nor Steelers coach Mike Tomlin trusted their quarterbacks to make plays down the field and avoid turnovers, resulting in very safe, conservative play-calling on both sides.

Godwin Igwebuike converted from safety to running back this past offseason and he gets his first NFL touchdown on a terrific 42-yard run pic.twitter.com/eh0gPyN0aj

Yet the Lions nearly earned their first win of the season thanks to an effective running game. Detroit rushed for 229 yards, led by D’Andre Swift’s 130. Godwin Igwebuike added 56 yards, most of those coming on a 42-yard touchdown run. Rookie Jermar Jefferson also scored on a 28-yard run, but suffered an ankle injury on the play that knocked him out for the rest of the game.

With the tie, Pittsburgh falls to 5-3-1 for the season, maintaining second place in the AFC North. But at 0-8-1, Detroit will avoid the possible indignity of going 0-17 during the first 17-game NFL regular season.

But the game is something no one should ever be forced to watch again. Reserve your pity for the beat writers and commentators who have to rewatch and study film for content throughout the week.

It's over. I hated all of that.

Several fans on Twitter joked that a recording of the game should be preserved for posterity. If the tape/hard drive is sent to a museum, it should be kept behind glass, never to be touched again.

The Smithsonian has requested footage of this Lions-Steelers game for its archive.

Did you guys see this highlight from the Lions-Steelers game today? pic.twitter.com/JfAlZ3isZ2

Best NFL game of all time, change my mind

No one won in Pittsburgh on Sunday, nor did anyone watching from a distance on television throughout the nation.