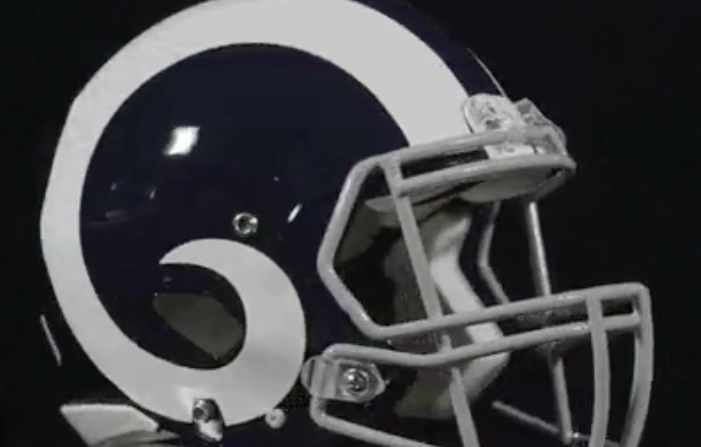 When the Rams moved back to Los Angeles, it was a bit of a head-scratcher that the team didn’t return to their roots and make a uniform change.

In 2000, during the Greatest Show on Turf years, the Rams switched from their traditional brighter blue and yellow colors to darker shades of blue and gold. The look stuck with the Rams through their final years in St. Louis. But with the team moving back to Los Angeles last year, their home from 1946-1994, many thought they would go back to their traditional blue and yellow or blue and white combinations.

Well, making the switch to great retro uniforms is a decision that is better late than never.

The Rams made the announcement tonight that they are going back to the blue and white look that they rocked throughout the days of Deacon Jones and the Fearsome Foursome in the 60’s and 70’s for next season’s helmets.

#Rams Uni Update: The white horns are back!

Our primary helmets will have white horns in 2017. pic.twitter.com/hkQZr6b7ff

You wear these horns with pride and dignity. pic.twitter.com/zrLsGRqGyP

The franchise is also allowing fans to vote on the color of facemask, whether blue or white.

Which face mask should be worn with our white-horned helmets?

Vote in our Twitter poll for face mask Option A (blue) or Option B (white) pic.twitter.com/L6dmsw8o9I

The Rams wore the blue and white helmets for their Color Rush game against the Seahawks last year. According to the team’s website, the switch to the helmets full-time for the 2017 season is in part due to the extremely positive reaction they received. And the reason why should be obvious, they’re vastly superior to what the Rams have been wearing in more recent times!

For what it’s worth, the Rams are also putting their style of pants for the 2017 season up for a fan vote as well. Right now one single blue stripe is ahead of the double blue stripes on their white pants. The team says they’re continuing to evolve their uniforms with a full rebrand set for 2019. While going back to the blue and white is a great move, the Rams plan to keep their same white jerseys for next season with blue and hints of gold. I’m no fashion expert, but that could present a weird amalgamation of past and present colors and fashions. We’ll see how the end product turns out, but at least the Rams are moving in the right direction.

Sure, there are some retro uniforms that should be left to the dustbin of history, but sometimes you have to go back to your roots and just get it right. (Please let the Cleveland Browns take note of this.)