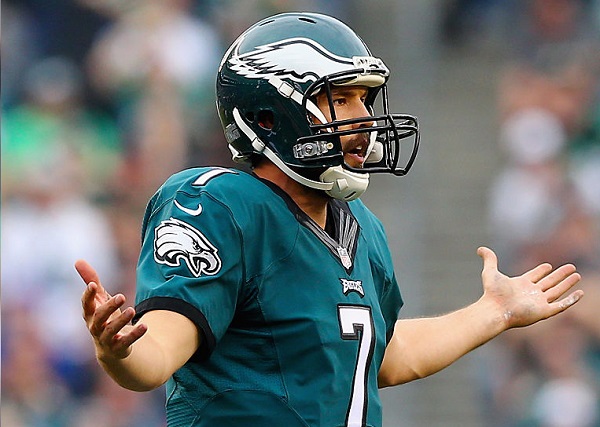 There aren’t many believers out there in Sam Bradford. His injury record is always going to be a question mark, and his performance with the Eagles last year under Chip Kelly didn’t inspire much confidence. The rumors swirling that the Eagles may try to re-acquire Nick Foles also doesn’t engender much optimism. But one Eagle certainly believes in the former #1 overall pick: Malcolm Jenkins.

“If you protect Sam and give him weapons to use,” Jenkins said on CSN-Philadelphia’s show Philly Sports Talk on Tuesday. “I think he can be one of those quarterbacks to win a championship.”

“He’s got new guys. Then he got hurt, and when he came back, he decided to take the team by the horns basically. He really started to be a lot more vocal, he started to break down the huddles, he started to speak to the team before every game. When he did that, he gained the trust of the teammates and he started playing better. The back half of the season, he played really well for us.”

Through the first seven weeks of the season, Bradford completed 62% of his passes and had a 76.4 passer rating. Both put him at 27 out of 29 qualified QBs during that span. But, as Jenkins pointed out, he did get hotter as the season went on. From Week 8 until the end of the season, Bradford was one of the better QBs in the league. He completed 68% of his passes, fourth highest in the league, and amassed a passer rating of 97, ninth highest. He went 4-3 with 10 TDs and four INT’s in those seven starts. Certainly an improvement, but Super Bowl winning form?

“In the first half of the season, he took the offense to the shower [for team meetings] and it was kind of private,” Jenkins said. “The back half of the season, he was addressing the entire team in the locker room. It was clear at that moment that this was his team and he was going to take it over. Everybody needed that from him. It was that last boost that we needed. Although it didn’t necessarily translate into wins, it definitely translated into us playing with a lot more trust, playing together a lot more. It’s what you want to see out of your quarterback.”

The Eagles have a decision to make about their QB situation next year with only Mark Sanchez under contract. The Eagles’ makeshift front office can give him the franchise tag and pay him $20 million next season, or try to work out a long-term deal with Bradford, paying him around the same money annually, if not a tiny bit less per year. With the QB carousel already spinning at Mach 3, there are certainly plenty of questions left to be answered, but for Jenkins there aren’t any.

“Hopefully we can get Sam here. Like I said, I think everybody believes that he can be the quarterback and the leader that we need to take this team to a championship. I don’t get into numbers. If I’m trying to win a championship and I think he’s the quarterback, then I’d pay him.”