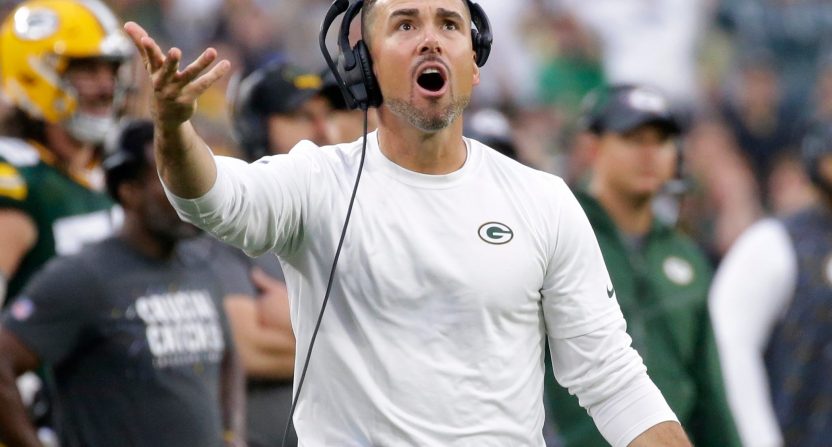 The Green Bay Packers are getting an early start this Sunday. They’ll kick off against the Cincinnati Bengals at noon on Sunday. That’s the first noon game of the years for Green Bay and head coach Matt LaFleur is definitely in a prime motivational mode about it.

On Thursday, LaFleur was talking to the media about how the team was preparing for the early game and his explanation was, well, a bit different.

LaFleur with a good line about the Packers playing their first noon game of the season at Cincy (1 pm ET):

"They've got to wake up with their piss hot."

When asked how exactly one gets his "piss hot," he said "it's just a mentality. … It should naturally be hot, right?"

When asked about how players needed to get right for the early afternoon game time, LaFleur said that the Packers “gotta wake up with their piss hot.”

Packers reporter Rob Demovsky followed up with the question that we were all then thinking. “How does one get their piss hot?” To which LaFleur replied, “It’s a mentality. It should naturally be hot, right?”

Good question, Matt. Not everyone seems to agree with that sentiment.

LaFleur thinks piss should always be hot. I strongly disagreed. I think that means you need to see a doctor.

The #Packers are entering a three-game slate where they’ll kickoff at noon. To prepare for that, Matt LaFleur says his players have to “wake up with their piss hot.” pic.twitter.com/xqtuEOJnjb

And apparently, this isn’t the first time LaFleur has gone the piss route to make a football metaphor.

Matt LaFleur on #Packers preparing for their first noon game: "They've got to wake up with their piss hot."

So if you're keeping track at home, LaFleur wanted his players to piss clear in Jacksonville for opener, and piss hot this week in Cincinnati.

Sure enough, before a recent game, LaFleur told reporters that “every time they pee, you want it to look clear.” What’s going on, Matt?

We just hope Packers players pee in a way that seems normal for them and perhaps the training and practice they’ve done will do more to prepare them for this Sunday’s football game. Otherwise, urine trouble.