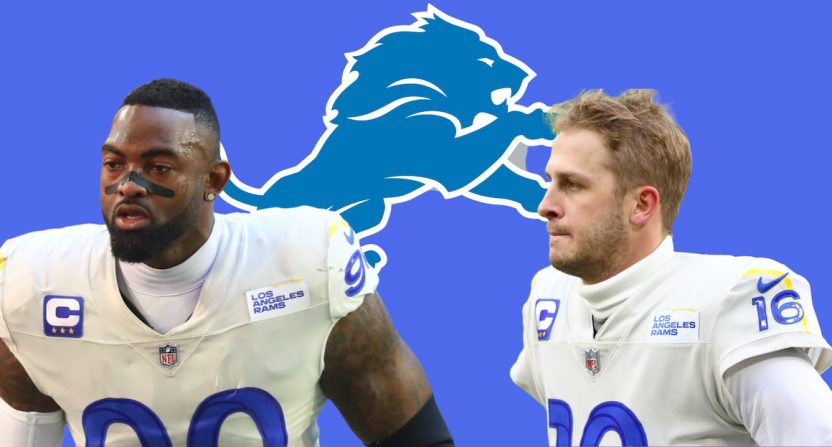 The Detroit Lions are in the midst of a rebuild under new coach Dan Campbell and general manager Brad Holmes, so they’re not pursuing many of the top names available in free agency. However, the team is excited about acquiring defensive tackle Michael Brockers from the Los Angeles Rams.

(Detroit trades a 2023 seventh-round pick in the deal, according to NFL Network’s Ian Rapoport.)

Brockers will bring some much-needed production to Detroit’s interior defensive line, notching five sacks, five tackles for loss, and 51 total tackles last season. Holmes was the Rams’ scouting director before joining the Lions and is familiar with the nine-year NFL veteran. The hope is that Brockers will provide leadership and help establish a new culture in Detroit.

However, Brockers might have to clarify some recent statements he made regarding Jared Goff after the quarterback was traded by the Rams to the Lions in late January in exchange for Matthew Stafford. Excited about his team’s new quarterback, Brockers told TMZ that Stafford would be “a level up” from Goff.

“Is it a level up?” said Brockers. “In my heart, deeply, just understanding what [Stafford] brings, it’s a level up.”

Brockers elaborated on his excitement for Stafford during an appearance on NFL Network’s Good Morning Football soon thereafter.

“I feel like just watching him over his career, seeing the comebacks that he’s had, seeing so much of the numbers that he’s had, were just expecting that to just do better when he comes to the Rams,” Brockers said. “We expect that to match well with what we do. We feel like with this move, this will be the turning point to where we can just win the big game.”

In fairness to Brockers, Stafford being an upgrade over Goff was the consensus among media and fans after the trade was made. Goff posted a subpar performance for the 2020 season, throwing for 3,952 yards, 20 touchdowns, and 13 interceptions. Dealing with a thumb injury, he lost the confidence of head coach Sean McVay and was essentially benched for both the Rams’ Week 16 game and Wild Card playoff matchup in favor of John Wolford.

But now Brockers is a teammate with Goff again and might have some explaining to do. At first glance, it appears to be a potentially awkward situation.

When Jared Goff sees Michael Brockers in the #Lions facility and remembers Brockers calling Matt Stafford a “level up” at quarterback. pic.twitter.com/MXS5UTv6xP

Yet we don’t know what kind of relationship the two had with the Rams. Besides, Brockers’ remarks weren’t necessarily intended to insult Goff — though they could be viewed that way — so much as compliment Stafford and express excitement over his team making a big move.

The situations are also different now. The Rams are a playoff contender and making a push for the Super Bowl, while the Lions are a major construction project. That change of circumstances could be disappointing for both players.

Yet both know what a winning NFL team looks like and what’s necessary to get there. Being key pieces of a turnaround might have to what motivates them for the next couple of seasons. Perhaps that will create some solidarity between them.