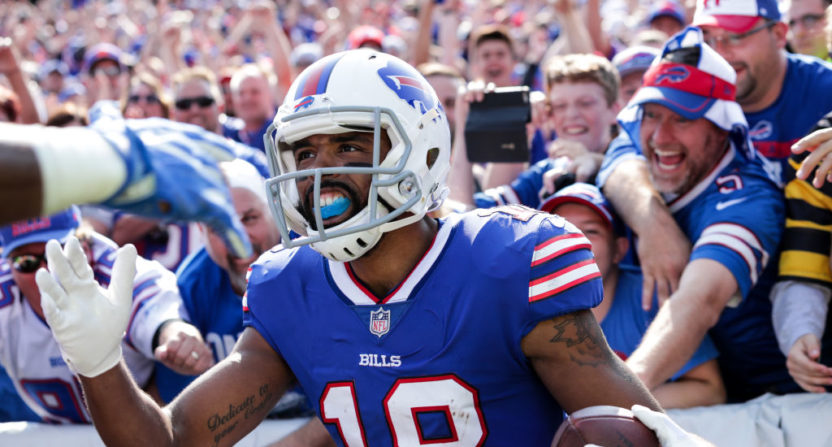 The first Sunday of the 2017 NFL regular season has now come and gone, leaving fans and “analysts” with plenty to talk about.

There were a few surprises on Sunday including the Chicago Bears keeping it competitive in their game with the defending NFC champion Atlanta Falcons, the Pittsburgh Steelers barely escaping Cleveland with a win over the Browns, and the Baltimore Ravens proving they do not need a healthy roster to easily defeat the Cincinnati Bengals.

Of course, there will be a few people who could rush to judgment on a few certain debate shows just to get a reaction out of their viewers and followers. So what could these talking heads possibly overreact to from Sunday’s NFL action?

In the midst of their epic 29-7 win over the Houston Texans on Sunday, the Jacksonville Jaguars sent a message to every other team around the NFL with their defense. The Jaguars’ defenders managed to end their game against the Texans with a whopping 10 sacks.

Jacksonville’s defense is now on pace to finish the year with 160 sacks. That number would easily obliterate the record set by the Chicago Bears back in 1984 when they accumulated 72 sacks in one season.

Who cares the that the Jaguars’ offense only threw for 125 yards against Houston on Sunday. The team’s offense will not have to do much this year since their defense has already established itself as the best in history of the NFL.

Bell, in his fifth NFL season, and Johnson, in his third, generated a lot of anger in the fantasy football world with their performances on Sunday.

During the Pittsburgh Steelers’ win over the Cleveland Browns, Bell ended up leading the Steelers in rushing for the day. But it was only with a measly 32 yards on 10 carries.

For Johnson, his Arizona Cardinals fell to the Detroit Lions on Sunday and he only managed a minuscule 23 yards rushing on 11 carries. Yes, he did have six catches for 68 yards, but that is not the point. He even left the game early with a sprained wrist that could end up keeping him off the field for a number of weeks. (So selfish.)

Everyone viewed these two running backs as two of the best, if not the top two, at their position before the start of the season. But obviously, the pressure of living up to lofty expectations from fantasy football owners this year is just too much for these two to perform at a semi-decent level.

Jared Goff and the Rams are ‘The Greatest Show on Grass’

Everyone remembers the Rams’ offenses from the early 2000s, known as “The Greatest Show on Turf” due to their offensive dominance out on the field. Well, the 2017 Los Angeles Rams came out on Sunday with enough firepower on offense that made the franchise’s former offenses look like they belonged in a pee-wee football league.

Rams’ quarterback Jared Goff passed for an impressive 306 yards in the team’s victory over the Indianapolis Colts on Sunday, and even threw a touchdown pass. Sure, five of Los Angeles’ offensive drives ended with punts against the Colts, but that’s besides the point.

The point is, the Rams put a gigantic number up on the scoreboard on Sunday and the rest of the NFL has no idea how they are even going to have a chance against this team in 2017.

After the New England Patriots lost in their season opener last Thursday against the Kansas City Chiefs, the winner of Sunday’s matchup between the New York Jets and the Buffalo Bills would be in sole possession of first place in the AFC East.

Thanks to a one-yard touchdown run by running back Mike Tolbert in the fourth quarter, the Bills were able to get a much-needed 21-12 win over the New York Jets. The game was definitely a must-win for Buffalo and now they are all alone atop the AFC East after Week 1.

It is going to be incredibly difficult for the Patriots to overtake the Bills at any point this season and capture their 10th straight AFC East crown. Especially given the way New England looked in their loss to the Chiefs last Thursday, Buffalo should feel safe about staying in first place for the remainder of the year.