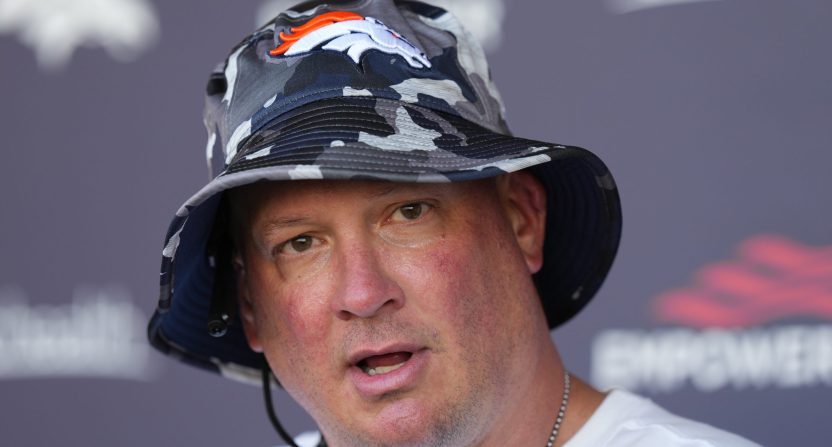 If you have watched every second of every game played in the over century-long history of the NFL, you have not seen clock management as bad as what coach Nathaniel Hackett Denver Broncos did at the end of Monday night’s game against the Seattle Seahawks.

Trailing by a point with time running out, the Broncos had driven to just short of midfield and faced a third-and-14. Russell Wilson hit Javonte Williams on a check-down pass. He gained nine yards and was tackled with just over one minute to play. Logically, Denver had two options.

Option one was to run a quick play. The risk, of course, is that if you hurry a play, a mistake is more likely. But the Broncos had three timeouts. So, even if that happened, they would have gotten the ball back.

Option two was to take a timeout after Williams was tackled. This was probably the best option, given that even with three timeouts, they would have had little time left if they went for the quick play and failed.

But Hackett took a third option.

He let the entire play clock wind down, then took a timeout with 20 seconds left. Then, rather than have his future Hall of Fame quarterback try to pick up five yards on fourth down, he elected to have Brandon McManus try a 64-yard field goal.

McManus gave it a valiant attempt, but it ultimately hooked too much and sailed wide left.

There’s usually some leeway given to head coaches in their first game. But with that kind of clock management, that was not the case on Monday.

The NFL world blasted Hackett for his abysmal performance.

The Broncos' clock management at the end of the game: pic.twitter.com/mXTuc4jrI2

That clock management from the Broncos was hilarious.

Brian Flores’ lawsuit should be won just off of what Nathaniel Hackett just did.

I’m absolutely stupefied by that decision by Hackett. I really don’t know if I’ve ever seen anything like that.

Just decided he had a better chance of his kicker making the 2nd longest field goal in NFL history than he had of his quarterback picking up five yards!

So, Nathaniel Hackett really decided to settle for the 64 yarder?? Don't worry he used his TOs when the Seahawks were taking a knee…brutal!

To be clear, this would have been a bad idea even if McManus had made the kick. Kicks that long are usually tried with no time left or maybe on a fourth-and-long. But even if the Broncos were facing a fourth-and-15, it feels like their odds of picking it up would have been better than this. Additionally, most of the longest kicks in the history of the league have been made either at altitude or indoors. This was neither.

Hackett’s performance in his first game was abysmal. Time will tell what kind of coach he’ll be. But it’s hard to imagine anyone in Denver feeling all that good about things right now.