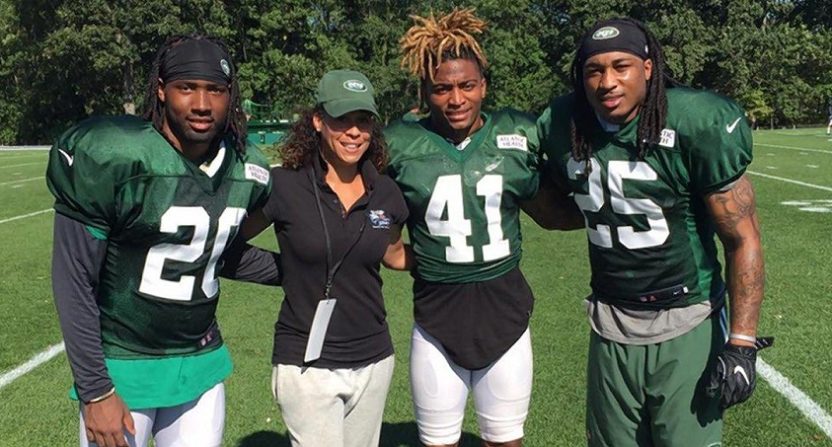 The New York Jets are set to hire the first woman assistant coach in franchise history, but her time with the team may be short. Collette Smith will join the coaching staff of the Jets as a preseason intern for the remainder of the offseason through training camp, at which point it’s expected that her run with the Jets staff will conclude.

As reported by the New York Daily News, Smith established a professional relationship with the Jets and head coach Todd Bowles last year when she got the opportunity to shadow the team’s defensive backs to gain some perspective on coaching. Smith became a coach with the New York Sharks, an Independent Women’s Football League, after she suffered a knee injury playing defensive back. Perhaps this could be a giant step toward taking her coaching skills to the NFL on a more long-term basis.

“I’m over the top. I’m humbled and I’m proud,” Smith said to the New York Daily News. “This could have happened with any NFL team. But it just so happened that it was with my beloved New York Jets. This is bigger because of that. God forbid, it would have been with the Patriots. But I still would have done it.”

Smith follows in the trail-blazing footsteps of Jen Welter and Kathryn Smith. Welter was the first woman to coach in the NFL, with the Arizona Cardinals as an assistant coaching intern in 2015. Welter was added to the Arizona staff by Bowles’ former Temple coach, Bruce Arians. Bowles also coached under Arians at Arizona as the defensive coordinator before landing the head coaching gig with the Jets.

Last year, the Buffalo Bills made Smith the NFL’s first full-time assistant coach when she was named the quality control special teams coach. She was let go after the Bills fired Rex Ryan.

“We as women carry a lot on our shoulders,” Smith said. “Right now, it happens to be football for me. This is a way for me to help empower women. Don’t dream small, play big and go for it.”

It’s not uncommon for teams to bring on additional assistants before having to remove them from the staff for the start of the season. The extra eyes and feedback come sin handy during the offseason with so many players looking to improve. Smith seems excited for the opportunity the Jets are giving her, and it will serve as another reminder that a gender barrier continues to be cracked in the NFL.