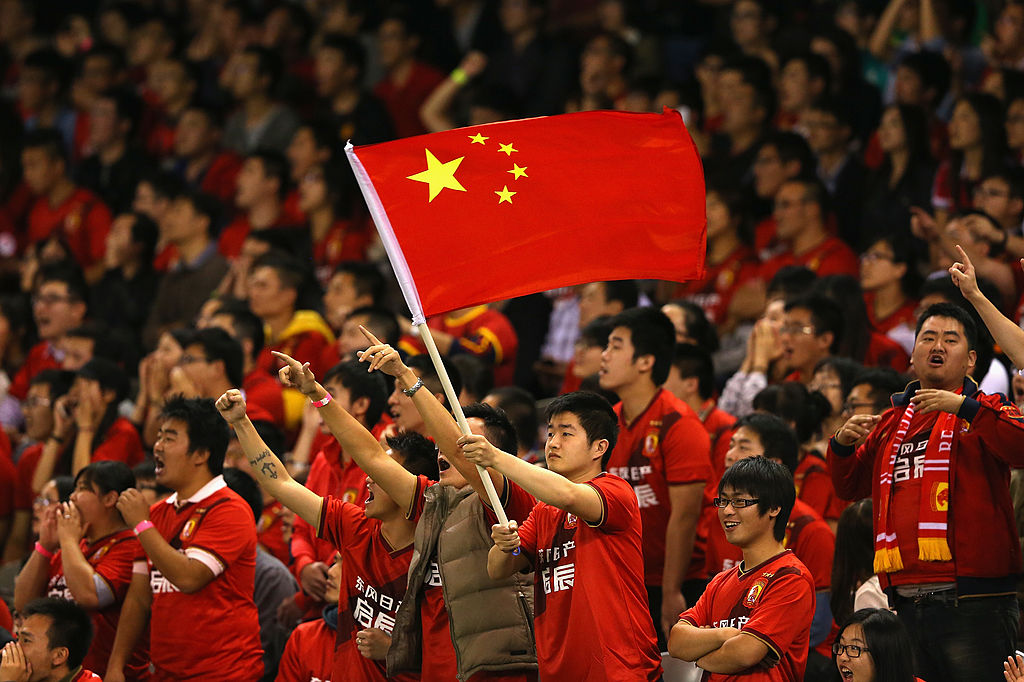 As part of its ongoing campaign to colonize world sport with America’s Game, the NFL is planning to play a regular-season game in China.

The news, first reported by FOX Sports’ Alex Marvez, makes all the sense in the world, right? China is the most populous country on Earth, with a burgeoning middle class, a taste for American brands and a hunger to play the world’s games on their turf. As the NFL expands its slate of regular season contests in London, goes back to Mexico and courts growing fanbases in Germany and Brazil, of course they’re trying to make inroads in the world’s second-largest economy.

NFL owners have been watching Chinese sports fans pump hundreds of millions into the Chinese Super League; if filling the mostly-empty Bird’s Nest stadium for a day gets them a piece of that ever-growing pie, why wouldn’t they do it?

Well, for starters there’s the half-a-million people imprisoned for no real reason, per Amnesty USA, and world-high execution rates. There’s government suppression of minority cultures and religions, lack of equality for women and LGBT citizens and a truly horrific track record on reproductive rights. Not to mention heavy government restrictions on speech, press, assembly and even Internet access.

If nothing else, the PR will a take wretched turn once all the sportswriters get there and find out Twitter’s illegal.

Of course, American companies have been doing brisk business in China for decades. Even if it says “Apple” or “IBM” on the device you’re using to read this article, chances are high it was made in the DPRC. We, as a nation, can’t scream at the NFL for building a fanbase in China when GM just unveiled the first Chinese-built Buick in Detroit.

The NFL’s marketing director for China, Richard Young, estimates there are more than 14 million casual NFL fans there, and would like to see that number triple by 2020. If it did, there might even be more Chinese fans buying authentic NFL jerseys than American fans buying Chinese-made knockoffs!

But the NFL’s plans for China are totally at odds with the league’s own stated values—and make them look like hypocrites on the homefront.

“NFL policies emphasize tolerance and inclusiveness,” league spokesman Brian McCarthy told the Atlanta Journal-Constitution‘s Jeff Schultz, “and prohibit discrimination based on age, gender, race, religion, sexual orientation, or any other improper standard.” With Georgia governor Nathan Deal considering signing a bill that allows such discrimination, McCarthy sent him a warning: “Whether the laws and regulations of a state and local community are consistent with these policies would be one of many factors NFL owners may use to evaluate potential Super Bowl host sites.”

Atlanta Falcons owner (and very expensive new-stadium builder) Arthur Blank strongly agreed, with a statement of his own:

“One of my bedrock values is ‘Include Everyone’ and it’s a principle we embrace and strive to live each and every day with my family and our associates, a vast majority of which live and work in Georgia. I strongly believe a diverse, inclusive and welcoming Georgia is critical to our citizens and the millions of visitors coming to enjoy all that our great state has to offer. House Bill 757 undermines these principles and would have long-lasting negative impact on our state and the people of Georgia.”

This isn’t even the first time the NFL has used the Super Bowl as leverage against a regressive state legislature; in 1990 it pulled the Super Bowl from Arizona because the state refused to recognize Martin Luther King, Jr. Day.

So if the NFL and its prominent owners are not only willing to cite tolerance, inclusiveness and equality as “bedrock values” but put their money where their mouth is, why are they throwing those values aside to chase money in a country where intolerance is law?

The cynical answer: The NFL is always driven by money, but in America, right now, inclusiveness is good for business.

While football has long since conquered baseball as American sports fans’ No. 1 sport, mass-market appeal has made the NFL a cross-cultural phenomenon. Non-traditional sports fans like women, the LGBT community and even Star Wars nerds aren’t just being allowed into the stadium, they’re being aggressively marketed to.

Though our red/blue culture wars rage on, “tolerance” of people who aren’t ethnic-majority males is no longer a political statement: it’s a cultural and legal expectation.

Taking a stand against LGBT discrimination in Georgia is the right thing to do—but how meaningful can it be while pushing into a country where homosexuality wasn’t decriminalized until 1997, and legal LGBT protections are basically nonexistent? The league won’t sell many pink sequined jerseys in a country where gender-selective abortions and female infanticide result in almost 16 percent more baby boys than girls, the world’s worst ratio.

As the NFL tries to export America’s game to the rest of the world, there will be more culture clashes like this. One fan on Twitter said he’s “heard” Qatar would love to open one of their World Cup venues by hosting an NFL game. Those would be the venues built by slave labor in horrific, lethally unsafe conditions:

Surely the NFL won’t do that. But Brazil—which might be the NFL’s next stop—legally banned women from playing soccer until 1979, and girls still face strong stigmas against playing sports today.

If the league just wants to wash their hands of politics and sell their product wherever people will buy it, fine. But the NFL has a decades-long history of trying to be on the right side of history—and if inclusiveness and equality are truly core league values, they should apply everywhere the NFL travels.

If the NFL is going to export America’s game to the world, they should export all of it. Make football a global ambassador for liberty and equality. Run Play 60 flag-football camps for boys and girls ahead of time. Schedule it in October, so everyone’s wearing pink wristbands and cleats. Send teams with female coaches, executives and owners. Have one of the teams sign Michael Sam, whatever—just do something that, for once, truly honors America and the freedoms we hold dear.

If the NFL has the fortitude to do that, millions back home will stand up and cheer.