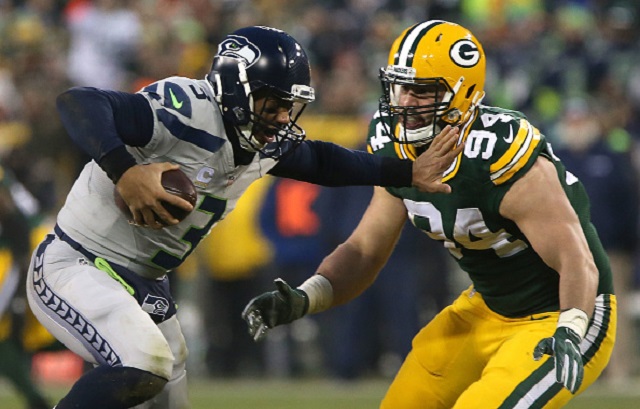 As usual, Thursday Night Football was the most anticipated matchup of the week, and…

… yeah, no, I still can’t believe it either. But the 21-13 TNF triumph of the Kansas City Chiefs over the Oakland Raiders wasn’t just an exciting matchup, it was a hugely decisive result that re-shaped the AFC playoff picture.

Amidst rumors that head coach Rex Ryan might lose his job if his Buffalo Bills’ game against the Pittsburgh Steelers didn’t go well, it… didn’t go well. The final score, 27-20, flatters the Bills, against whom Steelers tailback Le’Veon Bell had a record-breaking day: 236 yards and three touchdowns on the ground, plus four catches for 62 yards.

At the time of this writing, Ryan still has his job.

The Carolina Panthers won the Good Teams Who Already Lost Too Much for This Game to Matter Bowl, beating the San Diego Chargers 28-16. The return of RGIII returned the winless Browns to the loser’s column after this nonsense:

It took a little extra derring-do from Comeback King Matthew Stafford, who dislocated a finger in the effort — but the Detroit Lions got the all-important W against the Chicago Bears — and Stafford broke Peyton Manning’s single-season record for games with both a fourth-quarter comeback and game-winning drive.

The Houston Texans look set to be the worst team ever to win a division. They outlasted Andrew Luck and the Indianapolis Colts and are now tied with the Tennessee Titans at 7-6, but have a far easier schedule and own all the tiebreakers. Somehow, a team that ranks 28th in offense, 26th in defense and 30th in Football Outsiders Team DVOA is going to host a playoff game.

The Minnesota Vikings kept their playoff hopes on life support, with a 25-16 win over the flailing Jacksonville Jaguars. The Miami Dolphins technically stayed alive for the postseason, too — but Ryan Tannehill’s ACL tear puts their season in the hands of backup Matt Moore, as the Miami Herald‘s Greg Cote wrote.

The Philadelphia Eagles didn’t make it easy on Kirk Cousins and his Washington squad, but the final score was 27-22, putting them back on the bubble of the NFC playoff race, currently the top team out. The Tennessee Titans scored the first 13 points of the game against the Denver Broncos… and grossly enough, that was enough. A 13-10 win keeps them tied with Houston — and sets off alarm bells in Denver.

For some horrible reason, the Football Gods tortured us with more than four quarters of quarterbacks Bryce Petty and Colin Kaepernick. The Jets put us out of our misery with a truly meaningless overtime win.

The less said about the Falcons’ 42-14 dismantling of the Los Angeles Rams, the better.

One of the best matchups of the day, well, wasn’t: The Green Bay Packers, who’d struggled to a .500 record over the first 13 weeks of the season, got a Popeye-eating-his-spinach boost from a Lambeau Field snowstorm in a 38-10 thrashing of the Seattle Seahawks.

Interceptions were also a thing in Tampa Bay, where New Orleans Saints legend Drew Brees threw three picks for the second straight week. But rookie Bucs quarterback Jameis Winston failed to capitalize. For the first time in 55 games he failed to account for a passing or rushing touchdown. Even so, beleaguered rookie kicker Roberto Aguayo’s perfect day (3/3 FGA, 1/1 XPA) was enough to nudge the Bucs over the Saints, 16-11.

In case there was any doubt, on Sunday Night Football, Odell Beckham, Jr. proved he can singlehandedly beat any defense — and therefore, help his New York Giants beat any team — in the NFL.

Dez Bryant makes his first catch of the night…

Rookie quarterback Dak Prescott had his worst game as a pro in the rematch of the Cowboys’ only loss. The Giants picked him off twice, sacked him three times and held superstar wideout Dez Bryant to just one catch — which he promptly fumbled. Crucially, the Cowboys’ offense converted just one of 15 third downs.

Of course, the Giants offense really wasn’t any better over the course of four quarters. But then this happened:

The Cowboys are still two games ahead of the Giants with three to play. They’re safety ensconced as the No. 1 seed in the NFC, as well. But if they drop another game, either the Detroit Lions could take away home field advantage, or the Giants could steal the division (but not both, since the Lions and Giants play each other next week).

Of course, the Cowboys haven’t lost to a non-Giants team all year, so it’s a little early to bust out the doom and gloom. But for the first time all year, there’s real reason to think Dak Prescott and the Cowboys aren’t destined to cakewalk their way to a Super Bowl championship.