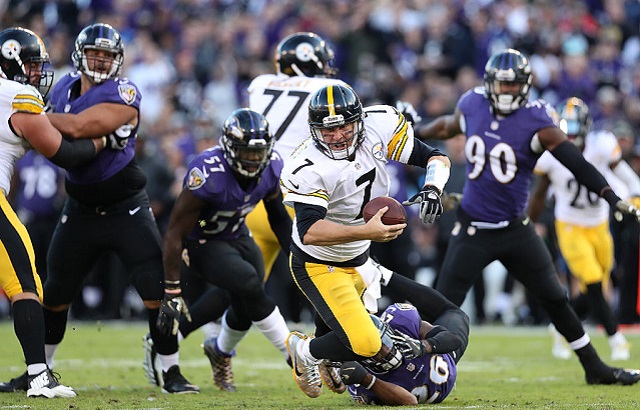 Week 9 decided the playoff fates of most teams in the NFL. We don’t know exactly which teams are in the bracket, or how the season’s endgame scenario will play out.

But before the games kicked off, ESPN’s Brian Burke tweeted out a graphic showing how far each team’s chances of making the playoffs would swing with a win or loss:

Biggest game is PHI-NYG, but for many marginal teams, nearly all of their playoff hopes rest on winning this week. Do-or-die week. pic.twitter.com/AqXYfnVu8w

The NFC South started us off on Thursday Night Football, with the Atlanta Falcons outracing the Tampa Bay Buccaneers, 43-28. Jameis Winston and Mike Evans managed to make some great plays, just not as many as Matt Ryan and Julio Jones.

The early block of Sunday games held a big surprise: Pittsburgh Steelers quarterback Ben Roethlisberger was not only activated, but started the game less than three weeks after a knee meniscus surgery. Turns out the knee wasn’t the problem: Roethlisberger and the vaunted Steelers offense scored zero points through three quarters, and the Ravens cruised to victory and now (thanks to that tiebreaker) lead the AFC North.

Another day, another feast for @EzekielElliott!

There were no surprises in Cleveland; the Dallas Cowboys inexorably ground out a 35-10 win. Same goes in Kansas City, despite the Chiefs missing their starting quarterback and top two running backs. The Chiefs improved to 6-2, while their victim, the Jacksonville Jaguars, dropped to 2-6.

The New York Jets made it close, but the Miami Dolphins made it three in a row when returner Kenyan Drake took the Jets’ last kickoff all the way back. The Dolphins, left for dead at 1-4 few weeks ago, are now at .500 and in second place in the AFC East.

The once-mighty Minnesota Vikings continued their freefall. The Detroit Lions came to U.S. Bank Stadium and won their fifth game with their fifth fourth-quarter comeback, and Golden Tate’s touchdown parkour:

Golden Tate, this is UNREAL pic.twitter.com/uOT3jvhSuX

Eli Manning, Odell Beckham Jr. and the New York Giants made a massive statement by taking care of the Philadelphia Eagles, 28-23. Beckham caught two of Manning’s four passing touchdowns, and the Giants defense picked Carson Wentz off twice. The Giants now sit at 5-3, two games behind the Dallas Cowboys, while the Eagles — who still boast a top-10 scoring offense and defense — drop to a last-place 4-4.

A game featuring Cam Newton against a fast, physical defensive line and Case Keenum against… well, himself, was always going to be a low-scoring slugfest. The Los Angeles Rams and Carolina Panthers delivered just that in a 10-3 Carolina win. A game between the league’s two worst scoring defenses was always going to be a track meet; the New Orleans Saints lapped the San Francisco 49ers, 41-23.

At Lambeau Field, the Green Bay Packers were caught napping by the Indianapolis Colts. Jordan Todman took the opening kickoff back for a touchdown and by halftime, the Colts were up 24-10. Aaron Rodgers and company made a valiant comeback attempt, but it was too little, too late — and it may be too late for head coach Mike McCarthy.

The Chargers did their sloppy, close, exciting thing against the Tennessee Titans. Marcus Mariota was about to pull off the signature win of his young career… and then he threw a pick-six, the Chargers’ second defensive touchdown.

Finally, it was time for the long-awaited Sunday Night Football AFC West showcase: The Denver Broncos at the Oakland Raiders, playing for the inside track on winning the division, conference and potentially the entire league.

Derek Carr, a week after blowing up franchise records, played within himself and took care of the ball, while the Raiders defense attacked Broncos quarterback Trevor Siemian relentlessly. Latavius Murray re-established himself as the chair of the Raiders’ running back committee with 20 carries for 114 yards and three scores, while the Broncos ran just 12 times for 33 yards.

In the end, the Raiders won the most meaningful game they’ve played since the Tuck Rule Incident, 30-20, and established themselves as the No. 2 seed in the AFC. It’s clear that even if this is the Raiders’ last season in their storied Oakland home, they’re going to make it count.