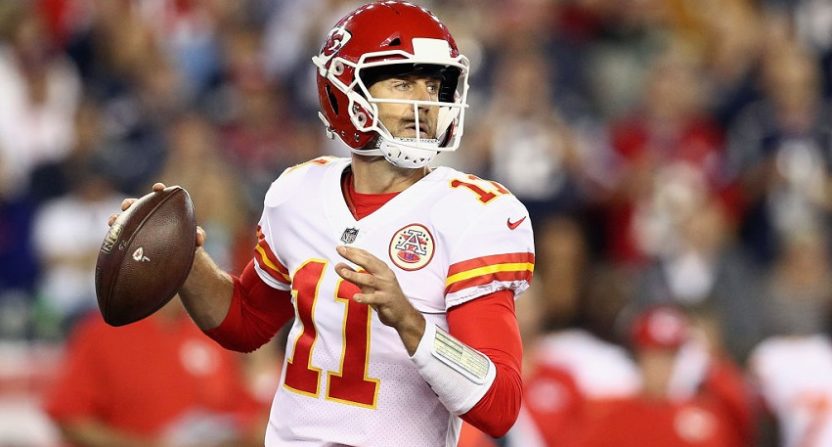 It’s never too early to start gauging the NFL MVP race, so we’re doing exactly that despite the fact the 2017 regular season is only 30 percent complete.

Here are the top 10 candidates that have emerged as we approach the sixth Sunday of the 2017 season.

1. Kansas City Chiefs QB Alex Smith (last week: 2nd): The 12-year veteran has finally put it all together this season, airing it out more than usual and still hardly ever making mistakes. He’s been nearly perfect statistically while leading a team that possesses a perfect record.

2. New England Patriots QB Tom Brady (last week: 1st): The two quarterbacks are neck-and-neck, but Smith’s numbers are better across the board and the Chiefs have a two-game edge on the Pats in the AFC. Still, Brady has often carried the Pats with little support, and his numbers blow everybody but Smith out of the water.

Aaron Rodgers does it again against the Cowboys. pic.twitter.com/AG6dcyqjrl

3. Green Bay Packers QB Aaron Rodgers (last week: 7th): Where would the 4-1 Packers be without Rodgers? Nobody is as magical in clutch moments as he is, and that was again exemplified on Sunday against Dallas. And it’s not as though his regular numbers (66.7 percent, 13 touchdowns to three picks, 104.1 passer rating) are shabby.

4. Philadelphia Eagles QB Carson Wentz (last week: unranked): The second-year North Dakota State product has been performing at an elite level for a 4-1 team. He’s also been nearly perfect on third down, which is a very good sign.

5. Carolina Panthers QB Cam Newton (last week: unranked): Boy, has he bounced back after a slow start. Newton has completed 77 percent of his passes for 10.8 yards per attempt, six touchdowns to one pick and a 137.2 rating in his last two games. The Panthers won both, scoring 60 points in the process, and are quietly 4-1.

We have a TD in London! Drew Brees 3-yard TD to Michael Thomas!#Saints take a 10-0 lead! pic.twitter.com/nbla1aN7xQ

8. Los Angeles Rams QB Jared Goff (last week: 3rd): The sophomore No. 1 overall pick has looked like a Pro Bowl-caliber veteran all season long, and the Rams are actually good!

Kareem Hunt is 4th player in SB era to start a career with 4 straight games with 100+ scrimmage yards pic.twitter.com/Hj9AtKMbRr