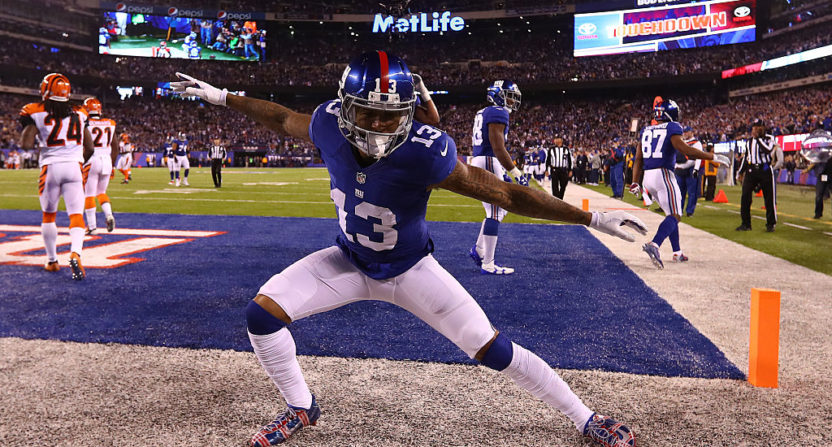 When making a comparison between two highly successful people these days, often times former NBA great Michael Jordan is used as a metaphor for someone who is the best at his or her craft. Whether it is a discussion about players on the basketball court or chefs in the kitchen, the phrase so and so is “the Michael Jordan” of blank has been a tactic used to explain greatness.

So let’s take this discussion to the NFL.

Of all of the players that will take the field in 2017, which one best represents everything that Jordan brought to the table during his playing days (the non-Washington days of course)? In terms of skill, athleticism, competitiveness, marketability, and championship pedigree, who truly is the current Michael Jordan of the NFL?

Despite only being in the league for three years, Beckham has already evolved into one the NFL’s top superstars of today. The young receiver seems to always be in the spotlight, good or bad, but it has lead to a sky-scraping level of popularity among fans today.

But for all of the flack people give Beckham for possibly being a bit too cocky, he actually backs it up with his play. Beckham’s 288 catches in his first three seasons are tied for the most ever (with his buddy Jarvis Landry) in NFL history.

And as some people shout “Jordan” or “Kobe” when taking a shot on the basketball court, “Odell” is now being called out while people attempt to make a crazy, ridiculous diving catch. Kids out on the playground want to be as great as Beckham one day, just like they used to want to be like Mike back in Jordan’s heyday.

It is kind of hard to believe, but Newton will be playing in his seventh NFL season this year. He had bit of a down season in 2016, but perhaps it was due to the “hangover” he endured from leading the Carolina Panthers to the Super Bowl and being named the league MVP in 2015?

On the field, the quarterback has had more than a handful of moments that have caused the jaws of football fans to drop. Who can forget his front flip into the end zone against the Houston Texans back in 2015?

The only thing holding him back from being everyone’s favorite NFL player is probably his sideline pouting when he or his team is not performing well. It is clear that Newton is competitive, but Jordan never let his opponents see the effect they had on him like Newton does.

After Super Bowl 51, arguing against Brady being the current NFL version of Michael Jordan is not a battle most would choose to fight.

Not only did he lead the New England Patriots to the franchise’s fifth Super Bowl win in 2016, but he did it in a game where at one point, the Patriots were trailing by 25 points to the Atlanta Falcons. His performance in Super Bowl 51 was certainly Jordan-esque.

Like Jordan, Brady has been a winner during his entire professional career. Since Brady became New England’s starting quarterback in 2001, the team has only missed the playoffs twice and one of those was due to the quarterback missing the entire season with a knee injury (2008).

Brady also has the record-setting accomplishments like Jordan did during his career. He has top five NFL career numbers in a variety of different passing categories including passing yards, passing touchdowns, passer rating, and fourth-quarter comebacks.

The retail world has not been shy about having Brady promote their products either. Sponsors including Uggs, Tag Heuer, Simmons Bedding Company, and Under Armour have all benefited from the Touchdown Tom being their spokesperson.

Finding an NFL defender who best represents Michael Jordan on and off the field was a bit of a difficult task. Some would say that Houston Texans’ defensive lineman J.J. Watt is an obvious choice, but his smothering presence in the public eye is just a bit too annoying.

So that does not leave a whole lot of choices, but Miller seems to have the type of personality that best represents Jordan the most among any defender in the league.

Besides the fact that his play on the field is immaculate, his shoe choices last year exposed the Denver Broncos linebacker to whole different group of people. If anyone knows about shoes and what they can do for a person’s career, it is Jordan.

Von Miller's shoes are the best thing that has happened in the horrible year that is 2016. pic.twitter.com/SKTBwJxGwG

Perhaps Miller and Jordan will bond over their love of footwear and become business partners in the future?

Rodgers’ consideration for this list is mostly based on his work on the field. He has had some semi-entertaining commercials with State Farm Insurance, but the quarterback is not really one who forcefully puts himself into the public spotlight.

But like Jordan, Rodgers seems to make the plays when his teams need them the most. His recent string of last second, hail mary touchdown passes are reminiscent of Jordan hitting the game-winning shot at the buzzer.

The quarterback has also found a way to still be successful no matter what skill level of players he takes the field with like Jordan did at times during his career. In 2016, the Green Bay Packers had to use a wide receiver as their running back for most of the season and Rodgers was still able to lead them all the way to the NFC Championship.

Just as Jordan was, the quarterback has a reputation for being one of the most clutch players his sport has ever seen.