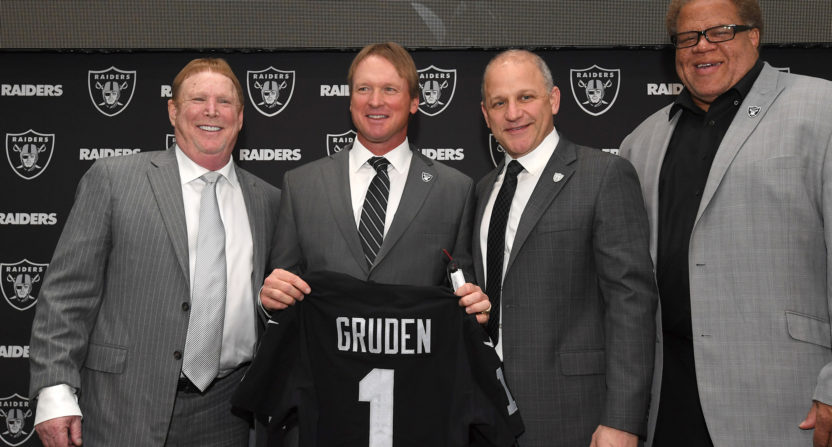 The Oakland Raiders are in some hot water over the hiring process that led them to bring aboard Jon Gruden.

Per ESPN’s Adam Schefter, the NFL is investigating whether the team violated the Rooney Rule, which requires that teams interview at least one minority coach before making a hire.

NFL officially now looking into Raiders’ head coach hiring process and whether they violated the Rooney Rule, per league official.

Gruden’s hire provoked some suspicion almost immediately upon being reported last week. The former Super Bowl-winning coach appeared to emerge as the Oakland’s choice almost as soon as the team fired Jack Del Rio on December 31, as seemingly affirmed by owner Mark Davis’ comment Tuesday that Gruden said he was “all-in” at a Christmas-Eve meeting. General Manager Reggie McKenzie said Tuesday that the team had interviewed Raiders tight end coach Bobby Johnson and USC offensive coordinator Tee Martin, but many observers were unsatisfied by that explanation.

On Wednesday, one day after Gruden was officially announced at a press conference, the Fritz Pollard Alliance called on the NFL to investigate the Raiders’ hiring process, and a day later the NFL apparently decided to do so. If the Raiders are found to have violated the Rooney Rule, team executives could be fined, as Detroit Lions general manager Matt Millen was in 2003 under similar circumstances.

Passed in 2003, the Rooney Rule has had a dramatic effect on NFL coaching hires, with the share of non-white coaches rising sharply over the past 15 years. In requiring that teams interview non-white coaches, the rule not only has a direct result on the coaching ranks but also gives minority coaches a boost in profile and puts them on the teams’ radars for future hires. Of course, the rule works only if the NFL enforces it, which is why the Fritz Pollard Alliance and others are so adamant that the league look into whether the Raiders took it seriously in this case.