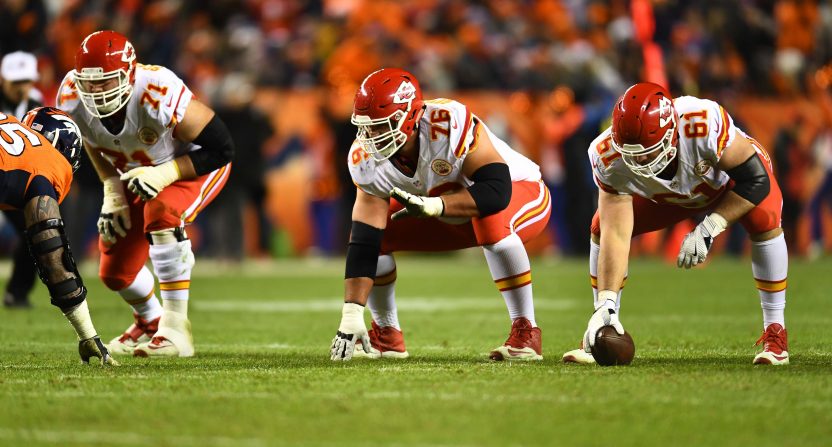 Each of the past four offseasons, while many of his NFL peers were vacationing or hitting the gym this spring, Kansas City Chiefs offensive lineman Laurent Duvernay-Tardif has been up in Montreal, pursuing a degree at McGill’s medical school. And when the four-year NFL veteran completed his program last month, he had a simple request for the league. He wanted to wear “Duvernay-Tardif M.D.” on his jersey, signaling to the world that he was a real-life bona fide doctor.

Well, the NFL isn’t known as the No Fun League for nothing.

Duvernay-Tardif has, as you would expect, worked quite hard to complete his medical degree. Since being drafted in the sixth round out of McGill in 2014, he has spent his offseasons in Montreal studying and attending classes. He told ESPN last month that he vowed to himself he would achieve his MD, even while chasing a career in pro football.

“Since the day I got drafted, I promised myself I was going to finish my studies and get that MD while I was still playing,” Duvernay-Tardif said recently. “It’s one of those life projects that you promise yourself you’re going to accomplish, and I’m on the verge of doing it, so I’m pretty excited.

With regards to medicine, it’s more like a marathon. I’ve been doing it for the past eight years, and it was always that vision. Every time the season was over and I was driving back to Montreal, and I was getting back into medical school while everybody else was enjoying their offseason, I was motivating myself with the thought of pushing through because it’s going to be worth it in the end.

“Nobody can take that from me. When I graduate, I’m going to be a doctor for life. I’m proud to be in the NFL, and it’s been an incredible journey to get here, but being able to combine medical school at the same time, this is the accomplishment I’m proudest about, to be able to combine both. So many times I heard people tell me I’d have to make a choice.”

And for all that hard work, all those hours in the lab, all those odds overcome, the guy simply wants two extra letters on his nameplate. Is that really too much to ask?

OK, fine. We understand the NFL doesn’t want to set any precedents that could lead to someone reprising the old HE HATE ME jersey (not that we would complain if it did). The league has to draw a line somewhere, and it has chosen to do so somewhere between “SMITH SR” and “DUVERNAY-TARIF M.D.”

But in our opinion, once you’ve graduated from medical school while starting for an NFL team, you’ve earned the right to bend the rules a little.

This is it! Today I become a doctor! It also marks the beginning of a great new adventure for all 2018 graduates of @mcgillu Faculty of Medicine. #LDTMD #graduation #passion #nfl #chiefs pic.twitter.com/j4oD1BCuXJ