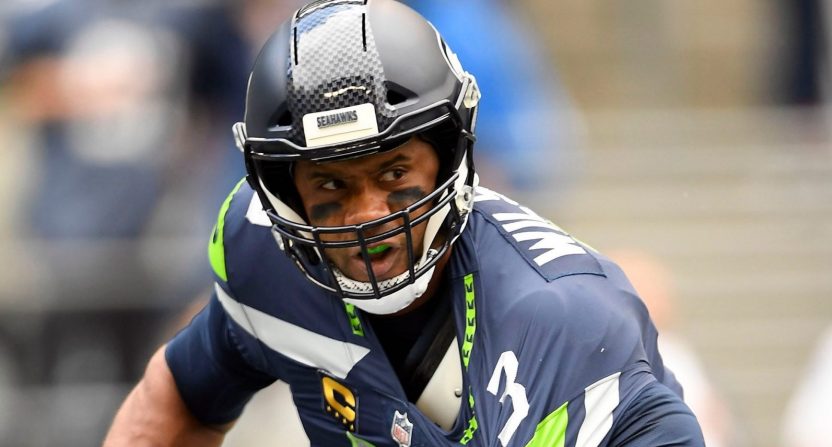 Throughout the 2021 NFL season, we’ll be ranking all 32 current starting quarterbacks from best to worst. Here’s the breakdown following Week 2.

32. Zach Wilson, New York Jets: The league’s lowest-rated passer has been a mess a lot more often than not. Two touchdown passes to five picks already, but a lack of support is a factor.

Here is a video of all 4 Zach Wilson interceptions and none of them are the offensive line's fault. Very concerning decision making by the rookie. pic.twitter.com/DyhCcvjSp0

31. Trevor Lawrence, Jacksonville Jaguars: It hasn’t been much prettier for the No. 1 overall pick. Lawrence has completed just half of his passes, and he has more interceptions (five) than touchdowns (four). He also has the highest bad throw rate in football by a wide margin.

30. Tua Tagovailoa, Miami Dolphins: He’s injured now, but even before that happened he had the league’s lowest QBR at 21.6.

29. Josh Allen, Buffalo Bills: The reigning MVP runner-up has averaged a horrendous 5.3 yards per attempt while completing just 56 percent of his passes. He also has the second-worst qualified on-target rate in football.

27. Ben Roethlisberger, Pittsburgh Steelers: The Pittsburgh offense is off to a slow start, and Big Ben’s 3.3 air-yards-per-attempt average is a factor.

24. Andy Dalton, Chicago Bears: His run might be over after his got hurt in his second start of the season, but he wasn’t bad before that injury and they still insist he’s the starter when healthy.

23. Carson Wentz, Indianapolis Colts: His numbers aren’t bad, but his team is 0-2 and he’s hurt again.

21. Jameis Winston, New Orleans Saints: We’ll give Winston some time. He’s been under a lot of pressure with limited support and a tough schedule to start the season, and his inconsistency is no surprise.

20. Sam Darnold, Carolina Panthers: He’s not being asked to do too much, but the Panthers are 2-0 and he has a triple-digit passer-rating with just one interception.

18. Mac Jones, New England Patriots: The rookie No. 15 overall pick certainly hasn’t made many big plays. In fact, he’s averaging a league-low 2.2 air yards per throw. But he’s yet to make a big mistake and is doing well with what defenses are giving him.

17. Baker Mayfield, Cleveland Browns: He’s thrown just one touchdown pass, but the 2018 No. 1 overall pick has completed more than 80 percent of his passes and is averaging an AFC-best 10.9 yards per attempt. He just has to start making more plays downfield.

16. Daniel Jones, New York Giants: Honestly, the oft-maligned third-year first-round pick hasn’t been that bad. He ranks near the top of the league with 5.9 air yards per attempt, and his legs have been a big factor. His deep ball has also been quite effective.

15. Kirk Cousins, Minnesota Vikings: He’s not making big plays often enough, but the veteran has five touchdown throws and has yet to toss a pick.

14. Taylor Heinicke, Washington Football Team: The 28-year-old has been on target on 84.5 percent of his throws. I doubt he gives this job back to Ryan Fitzpatrick.

13. Justin Herbert, Los Angeles Chargers: The sophomore isn’t tearing it up thus far, but he ranks fifth in the league with an on-target rate of 84.9 percent despite three picks. He’s also a ridiculous 8-for-10 on deep attempts.

12. Jimmy Garoppolo, San Francisco 49ers: The league’s ninth-highest-rated passer has done his job well with a rookie breathing down his neck.

11. Jalen Hurts, Philadelphia Eagles: The second-year second-round pick has a 108.2 passer rating on third down and has made a huge impact with his legs.

10. Derek Carr, Las Vegas Raiders: Dude is getting it done in a breakout season with 10 deep passes and a 125.6 rating on those attempts.

Derek Carr missed a wide-open Henry Ruggs III downfield against the Ravens. He was not going to make that mistake again in Week 2. Carr on deep passes against the Steelers: 4 of 4 for 134 yards, a touchdown, and a passer rating of 158.3. pic.twitter.com/DnRF3bxvKo

9. Dak Prescott, Dallas Cowboys: He’s not lighting it up just yet, but he’s looked healthy while completing 77 percent of his passes for a competitive Dallas squad.

7. Teddy Bridgewater, Denver Broncos: Is it finally coming together for him in Denver? The 29-year-old is the only healthy quarterback in the NFL with a QBR above 80, and only two quarterbacks have completed more third-down passes.

6. Lamar Jackson, Baltimore Ravens: The most dangerous dual-threat quarterback in NFL history has been superb in both respects. He just took down Patrick Mahomes and the Kansas City Chiefs.

3. Patrick Mahomes, Kansas City Chiefs: That was a tough loss Sunday night, but Mahomes has still completed 76 percent of his passes as the AFC’s highest-rated passer.

1. Russell Wilson, Seattle Seahawks: The NFL’s highest-rated passer has six touchdown passes and zero turnovers. What more can you ask of him?