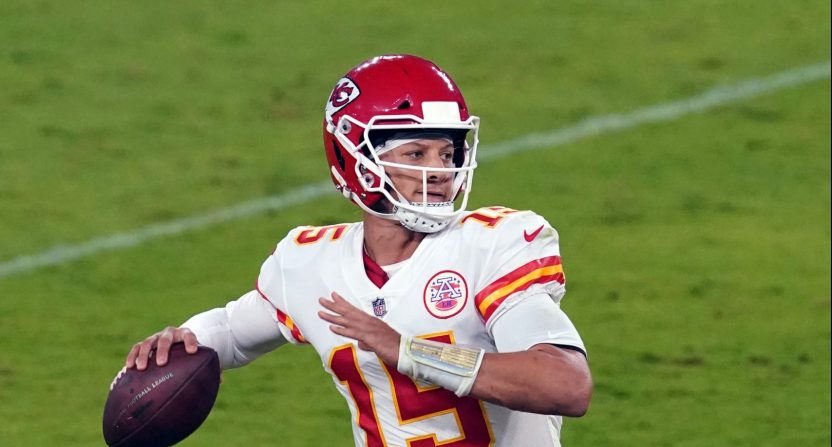 Throughout the NFL season, we’ll be ranking all 32 current starting quarterbacks from best to worst. Here’s the breakdown following Week 3.

32. Tyrod Taylor, Los Angeles Chargers: The currently-injured bridge quarterback for the Bolts remains the starter, but hasn’t been an effective one in years, and completed just 53 percent of his passes in the season opener.

31. Carson Wentz, Philadelphia Eagles: The highly-paid veteran appears to have the yips. With a league-high six interceptions, he’s the lowest-rated qualified passer in the NFL.

29. Sam Darnold, New York Jets: How depressing. The third-year No. 3 overall pick is averaging an NFL-low 2.3 air yards per completion. It doesn’t help that the Jets are a mess.

28. Daniel Jones, New York Giants: So are the Giants, and Jones — as a sophomore — has a higher ceiling than Darnold. Still, he’s the league’s second-lowest-rated passer.

25. Drew Lock, Denver Broncos: It was a mixed bag for the big-armed sophomore before he got hurt in Week 2. The jury’s very much out.

24. Ryan Fitzpatrick, Miami Dolphins: He’s only a bridge starter while the Dolphins wait for Tua Tagovailoa, but the cult hero has been unreal the last two weeks with a 113.3 passer rating.

23. Nick Foles, Chicago Bears: Never rule out magic from Foles, who led the Bears back for a Week 3 victory in relief of Mitch Trubisky. He posted a 95.1 passer rating in the process.

22. Gardner Minshew II, Jacksonville Jaguars: The Minshew magic has faded the last couple of weeks, but he still has a triple-digit passer rating.

21. Matt Ryan, Atlanta Falcons: The Falcons are a mess, but Ryan is still a gunslinger with solid numbers across the board. He takes a hit for his 54.6 passer rating in the fourth quarter of one-score games.

20. Matthew Stafford, Detroit Lions: He’s improved every week, and is coming off a strong performance in a road victory over the Arizona Cardinals. There’s still hope here.

19. Cam Newton, New England Patriots: The passing numbers still aren’t there and none of this has felt particularly sustainable, but Newton’s unique abilities could still position him for a strong season in New England.

17. Baker Mayfield, Cleveland Browns: It was a rough start, but Mayfield’s posted a 113.9 passer rating the last two weeks.

16. Philip Rivers, Indianapolis Colts: His numbers have shot up each week and there haven’t been any big mistakes. Nice to finally be well-support, eh?

15. Tom Brady, Tampa Bay Buccaneers: He and Rivers are off to similar starts, but Brady has made a few more plays.

14. Joe Burrow, Cincinnati Bengals: The top pick is on the right track following his first non-loss as a pro. He’s been a hell of a rushing threat, and is coming off his first triple-digit-rated game of his career.

12. Ben Roethlisberger, Pittsburgh Steelers: So far so good for Big Ben, who has thrown seven touchdown passes to one pick, and owns a triple-digit passer rating for the 3-0 Steelers.

11. Kyler Murray, Arizona Cardinals: Murray’s done a lot with his legs and has been more effective than his numbers indicate, but he did struggle in Week 3, he’s thrown more picks (five) than touchdowns (four), and he has the league’s lowest passer rating (26.9) on deep balls.

10. Ryan Tannehill, Tennessee Titans: The Titans are scoring a lot of points, and Tannehill’s been one of the most accurate passers in the league. He’s been solid across the board.

9. Derek Carr, Las Vegas Raiders: Carr’s bad throw rate of 9.4 percent is the lowest in the AFC, and he also leads the conference in on-target rate. He doesn’t take enough shots, but he hasn’t been terrible throwing downfield either. He’s not getting much credit, but he’s off to a very strong start.

8. Drew Brees, New Orleans Sants: His air yards and broad numbers still aren’t there, but the future Hall of Famer rebounded in a Week 3 loss to the Green Bay Packers.

6. Dak Prescott, Dallas Cowboys: The yardage numbers are insane, but he has a sub-100 passer rating, so he remains in the second tier here.

5. Lamar Jackson, Baltimore Ravens: Monday’s performance was a mess, but he’s still pick-less with the fifth-highest passer rating in the NFL, and there’s no question he’s the top quarterback rushing threat in the league.

4. Josh Allen, Buffalo Bills: The third-year breakout quarterback has a league-high 152.1 passer rating on deep throws and a 155.2 rating on third downs. He’s been unreal and is an MVP candidate.

2. Patrick Mahomes, Kansas City Chiefs: After a dazzling performance in a prime-time victory over the Ravens, Mahomes also has a 9-to-1 touchdown-to-interception ratio. There’s no questioning the reigning Super Bowl MVP at this point.

1. Russell Wilson, Seattle Seahawks: Wilson is blowing away the rest of the league with 14 touchdowns to one pick, and an off-the-charts 139.0 passer rating. He’s been practically perfect in every statistical category.