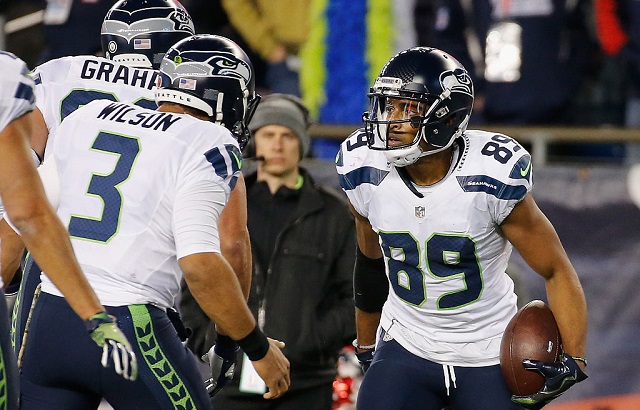 We’re 10 weeks into the 2016 NFL season, and what fans really want to know is who’s better than who? The playoff picture is becoming clearer, as a handful of teams are emerging as true contenders. Yet a few other teams still look questionable. How do they stack up against the competition? Could they be Super Bowl teams or are they merely playoff hopefuls? Which teams are getting hot and which are sliding fast?

32. Cleveland Browns
0-fer and falling fast. Didn’t play the Ravens nearly as closely as they did early in the year. Road to 0-16 is straight, wide and downhill.

31. Jacksonville Jaguars
Played the Houston Texans close, but that says more about how not-good the Texans are than very much positive about the Jaguars.

29. San Francisco 49ers
Signs of life! A feisty Colin Kaepernick performance against a rough Cardinals defense — and a not-appalling defensive stand against the Cardinals — put a mental green arrow next to the 49ers for the first time since… well, it’s been a while. There’s only so much one close loss can do for a team, but it’s worth keeping an eye on.

28. Chicago Bears
Cutler gonna Cutler. Any thought that he might spark a competitive stretch run by the Bears died with his Grossmanesque interceptionfest against the Tampa Bay Buccaneers — and the subsequent four-game PED suspension of Alshon Jeffery.

27. Los Angeles Rams
The Rams don’t run, can’t pass and won’t do us all the basic human courtesy of just losing every game so we can write them off completely. But that’s about to change: Rookie quarterback Jared Goff takes over this week, just in time to get mauled by the Miami Dolphins, New Orleans Saints, New England Patriots, Atlanta Falcons, Seattle Seahawks, 49ers and Cardinals.

26. Indianapolis Colts
Hard to judge after a bye week (and get ready to read that a lot), but the Colts have enough talent to be ranked higher than this. They just haven’t played well enough.

25. Baltimore Ravens
The Ravens’ Thursday night showcase against the Browns went much better than the first matchup. But they’re still not potent enough on offense to be a credible threat in this division.

Jameis Winston will be talking about this one for a long, long time. https://t.co/TK8LamBlAv

24. Tampa Bay Buccaneers
The Buccaneers drilled the Bears at home, preventing an ignominious tie of their own 40-year-old record: Nobody had lost three straight home games in three consecutive weeks since the 1976 Bucs. Things are definitely trending upward in Tampa, but not upward enough to put them much higher (yet).

23. Cincinnati Bengals
This is one of the 10, maybe even five most talented rosters in the NFL. However, they’re 3-5-1 and playing every bit that badly. They could yet flip the switch, but Marvin Lewis might finally have lost his handle on this squad.

22. Green Bay Packers
What is a power ranker supposed to do with this team? Theoretically, they’re one of the most talented teams in the league. Statistically, they’re playing well on both sides of the ball. In reality, they’re a trainwreck. Going into Nissan Stadium and getting outplayed, outhustled and outcoached in all three phases of the game is miles below The Bar for this franchise.

21. Carolina Panthers
It looked like they were set to get a hugely important win against a Kansas City Chiefs team that had won six of eight games by very fine margins. Instead, they dropped a must-win home game by very fine margins. As improved as they look on defense from the first few games of the year, the playoffs effectively started three weeks ago and they just lost a winnable game.

20. Pittsburgh Steelers
The Steelers team that looked completely helpless against the mediocre Baltimore Ravens turned around and gave the mighty Cowboys everything they could handle in Week 10. I’m… tentatively putting them here, because even an impressive loss can only cancel out so many unimpressive losses.

19. Houston Texans
This might be the worst 6-3 team in the history of the NFL.

18. Minnesota Vikings
The Vikings started 0-5, and at one point topped these power rankings. But the offense has all but completely imploded, and the fantastic defense is just keeping these games close. Until the Vikings either find more explosion in the passing game, or more balance from the run game, they’re going to flounder below the halfway mark.

17. Arizona Cardinals
Absolutely no cookies for almost-not-beating one of the league’s worst teams. Quarterback Carson Palmer is not right, and unless/until he gets right this team is going to fall massively short of its goals. Maybe all the tanning is frying head coach Bruce Arians’ brain.

16. Tennessee Titans
WOW. The Titans’ 45-27 ravaging of the Packers is a signature win for head coach Mike Mularkey and second-year quarterback Marcus Mariota. They’re now the eighth-ranked scoring offense, to go with their 22nd-ranked scoring defense. They’re clearly the best team in the AFC South, despite the standings. It’s too bad that doesn’t mean so much when it comes to leaguewide power rankings.

15. Miami Dolphins
The Dolphins are on a very nice four-game run, and it feels like they could work their way into the AFC playoff picture before too long. But they aren’t there yet, and play a lot of great defenses in December.

13. Buffalo Bills
Again, tough to judge a team on its bye. But the Bills not only have the 13th-ranked scoring defense, they’ve got the ninth-ranked scoring offense, too. Three straight close losses to the Dolphins, Patriots and Seahawks doesn’t actually look that bad, considering how good those three teams look right now.

12. Detroit Lions
Another bye-week special. Thanks to Matthew Stafford’s record-challenging five fourth-quarter comebacks and five game-winning drives (the record is seven in a season, by Peyton Manning), the Lions are suddenly in first place in the NFC North. With star linebacker DeAndre Levy and top corner Darius Slay potentially coming back off the bye, the Lions are in the driver’s seat from here on out.

11. Washington
Give Kirk Cousins all the credit he’s due: Against one of the best defenses in the league, he led a second-half comeback without turning the ball over once. This team is 5-3-1 in a spectacularly competitive division; if they can take care of business on Sunday Night Football against the Packers this week, their position this high up will be richly deserved.

10. New York Giants
They can’t run the ball for beans. Eli Manning keeps throwing grody Eli Manning picks. Head coach Ben McAdoo’s offense is barely averaging 20 points a game. Oh, and only the Bears and Browns are standing between the Giants and an 8-3 record. This is a very flawed team, but they’re great where it counts, when it counts.

9. New Orleans Saints
If the Saints hadn’t fallen victim to a last-second blocked extra point return last week, they’d be on a 5-1 streak, and just one game behind the Atlanta Falcons in the NFC South. As it is, they’re 4-5 and still well under most people’s radar. But they’ve got the No. 2 scoring offense in the NFL, and their last seven games include matchups against the Panthers, Rams, and Buccaneers twice.

8. Kansas City Chiefs
As alluded to before, the Chiefs are finding ways to win despite everything: Despite injuries, despite a lack of offensive firepower, despite never playing like a team people need to pay attention to (though their Week 6 win over the Oakland Raiders looks awfully good now). But they’re 7-2, and about to get one of the best defensive players in the NFL (Justin Houston) back.

Can’t wait for him to make a statement.

7. Atlanta Falcons
The Falcons have the No. 1 scoring offense in the NFL, and despite being ranked 28th in scoring defense have consistently gotten enough sacks and turnovers to outscore teams by an average of over three points a game. Though they’ve lost three of their last five, those opponents who bested them (Seahawks, Chargers in overtime, Philadelphia Eagles) are all tough outs.

Needed it.
Got it.

6. Denver Broncos
They went into the Superdome and won. They bounced back after the Raiders loss. More importantly than anything else, they found a way to pull out a game that was all but lost. The one unanswered question: Is Trevor Siemian ever going to play like he played when C.J. Anderson was lining up behind him?

5. Oakland Raiders
Derek Carr just won’t quit. His Raiders are 7-2, coming off the biggest win of his young career (and a bye), and suddenly they’re in the drivers’ seat for the No. 2 seed in the AFC. Now, how will he and his Raiders when people expect them to be good?

4. Philadelphia Eagles
I know, I know: They’re in fourth place in my leaguewide power rankings, and fourth place in their division. But the Philadelphia Eagles have the 10th-ranked scoring offense and No. 3 scoring defense, and have proven at least good enough to take the Cowboys, Falcons and Giants to the wire—if not beat them. This team is going to prove exactly how good they are this week against the top-three Seahawks.

3. New England Patriots
If the Seahawks had beaten them in Seattle, the Patriots would only have fallen one spot. But the way Russell Wilson dissected the ineffective Pats defense while a jam-packed Gillette Stadium watched in stunned silence… ouch. They’re still the class of the AFC, but they might not be able to get back above the Seahawks this season without winning another Super Bowl off ’em.

2. Seattle Seahawks
You can’t say enough about the job Wilson and company did against the Pats defense, but Tom Brady and company still nearly put up enough points to take home the W. The Seahawks are skyrocketing up this list, but the only way they climb up to the top spot is if the Cowboys falter.

1. Dallas Cowboys
Dak Prescott has finally crossed the Romocon: He’s the Cowboys’ starting quarterback, now and for the foreseeable future. He’s incorporated Dez Bryant without sacrificing his ability to move the chains or take care of the ball, and Zeke Elliott and the offensive line continue to steamroll everybody. Cracks in the armor have been few and far between. It’s hard to see anybody beating this team right now.