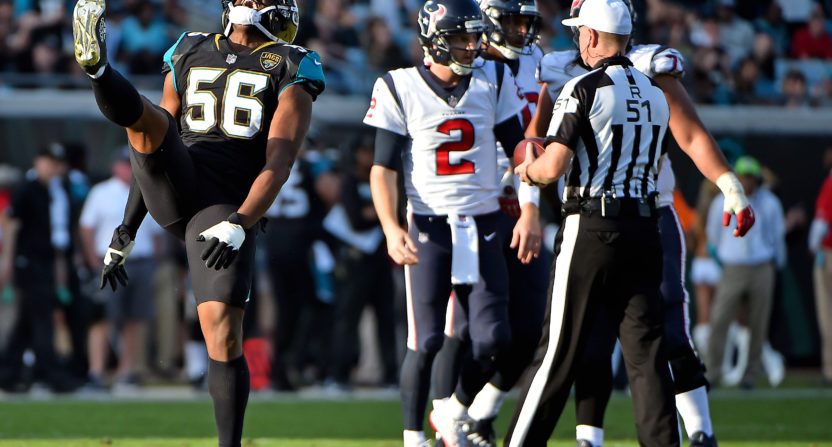 The Super Bowl gets all the hype and is the most watched television event every single year with well over 100 million viewers. But for true football fans, it’s this week’s games that might draw even more excitement.

Conference Championship Sunday is the best day on the NFL calendar with four teams in two games fighting for a spot in the Super Bowl. And this year, it’ll be the biggest test for where the NFL truly stands in its season-long ratings slide because it’s the day that attracts the biggest “football” audience.

The conference championship games don’t have the same nine-figure mega audience that the Super Bowl does because they don’t have the same cultural status or the interest in which commercials are airing. But the audiences are huge regardless. Last year, the games drew nearly 48 million viewers for the AFC Championship between Pittsburgh and New England and 46 million for the NFC Championship between Atlanta and Green Bay. The year before, Patriots-Broncos reached 53 million viewers.

Can Jaguars-Patriots and Eagles-Vikings reach the same heights? The NFL hasn’t had encouraging news with ratings so far this postseason and from a sports media perspective, it’s been the overarching major story of these playoffs and the entire season thus far.

Divisional Round ratings? The lowest seen since 2009.

Can the games this weekend buck that trend? Honestly, it’s tough to see it happening, which is why the NFL might have to accept the reality that these lower ratings are their new normal.

In the AFC Championship Game, the Patriots face off against one of their least inspiring challengers over the years in the Blake Bortles-led Jacksonville Jaguars. Yes, the Jags are a great story with a great young defense, but the headline matchup of Brady vs. Bortles isn’t quite the same as Brady vs. Manning or Brady vs. Roethlisberger.

We always tend to think that dynasties are good for sports because of the allure of Michael Jordan’s Bulls and the days of Bird’s Celtics and Magic’s Lakers. But look elsewhere across the sports landscape and it doesn’t always work out that way. Jimmie Johnson winning championship after championship has coincided with NASCAR ratings falling off a cliff. And the Spurs dynasty of Tim Duncan never really was a ratings winner.

Could it be possible that after so many years of Super Bowl titles and the drama of SpyGate and DeflateGate that fans are suffering from Patriots fatigue? Why not throw that into the pile with every other theory that exists to try to explain the NFL ratings drop?

On the NFC side, it’s a matchup between Case Keenum and Nick Foles, two quarterbacks who began the year as backups. And for diehard football fans these are two great teams with great stories. But like Jacksonville-New England, it’s tough to imagine Minnesota or Philadelphia drawing a lot of casual viewers.

Therein lies why this weekend is so important. It will show the NFL what their maximum reach still is for their core football audience. If the conference championship games can reverse the recent slide in ratings, it’ll show Roger Goodell and the NFL that the league can still turn it around. However, if we see more double-digit declines this weekend, the league is going to have to accept that it has reached its ratings peak.

That the NFL could have reached its peak doesn’t mean the end of the world for the league, as many “sky is falling” detractors might lead you to believe. The trends may not be going the right direction, but take a step back and realize we’re still talking about audiences in the 40 million viewer range. That’s insane. Any other entity that broadcasts a television program would gladly give away a billion dollars to reach that kind of audience on a regular basis.

And we can all micro-analyze every possible reasoning as to why the NFL’s ratings are taking a dive — over-saturation, politicization, player safety, fantasy football, catch rule confusion, the list goes on and on and on. But perhaps the simplest truth is that the NFL peaked as a cultural phenomenon in the early 2010s and is now coming back to where their audience should be. Moreover, it’s not like there’s much else on television that’s actually increased its ratings with so many people cutting the cord and the advent of Netflix and Hulu either.

With that context in place, the NFL’s ratings drop isn’t necessarily a deathblow for the league. But it does show that the league isn’t immune to facing its own set of challenges for the future. And it shows that where their ratings are at now after a season of coming back somewhat to earth is their new reality after years of apparent invincibility.