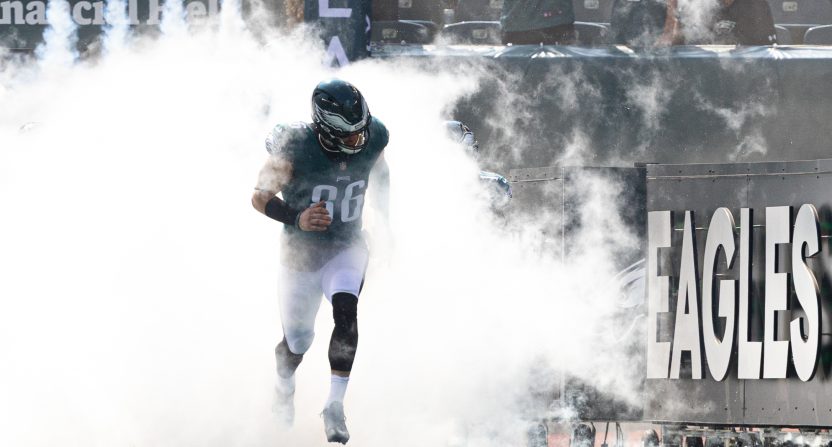 Ever since the Philadelphia Eagles and tight end Zach Ertz were unable to come to terms on a contract extension last season, the writing has been on the wall for his time in town. That time came to an end on Friday as the three-time Pro Bowler was traded to the Arizona Cardinals for cornerback Tay Gowan and a 2022 fifth-round draft pick.

Trade: The #Eagles are sending Pro Bowl TE Zach Ertz to the #AZCardinals, per me and @MikeGarafolo. At long last, Ertz on the move.

Ertz caught four passes for 29 yards and a touchdown in Philly’s 28-22 loss to the Tampa Bay Buccaneers on Thursday night and the 30-year-old remains a very capable weapon in the right offense. He currently has 18 catches for 189 yards and 2 touchdowns on the season.

The Cardinals are hoping to make Ertz a critical part of their passing attack with quarterback Kyler Murray. The Cards lost Maxx Williams for the season earlier this week, creating a pressing need for them. Before his injury, Williams was on pace for career highs in catches, yards, and touchdowns, which bodes well for Ertz’s stat line possibilities.

“He will always be a member of the Eagles family, not only because of what he accomplished on the field, but also because of the wonderful person, dedicated leader, and exemplary role model that he was for nine seasons in Philadelphia.” – Chairman and CEO Jeffrey Lurie

Ertz has played his entire career in Philadelphia since 2013, garnering 579 passes for 6,267 yards and 38 touchdowns. He also caught the game-winning touchdown in Super Bowl LII, making him a hero in Philadelphia no matter what else happens in his career.

Plenty of Eagles fans and NFL people chimed in on social media to react to the inevitable trade news.

Zach Ertz had two of the biggest plays in Eagles history

One of the greatest Eagles of all time. Thank you for everything @ZERTZ_86 pic.twitter.com/HyLTBQ3Vtf

Zach Ertz is departing from Philadelphia after an outstanding run.

Zach Ertz is going to be an absolute MONSTER in the Cardinals offense. 3rd-4th option where he only has to catch the ball and not have to worry about breaking tackles? Rack City: Population Ertz.

There better be a “Thank You Zach Ertz” billboard being put up on 95 as we speak.

While Ertz is not eligible to play on Sunday for the Cardinals, you can expect to see him in his new uniform next weekend when they host the Houston Texans.