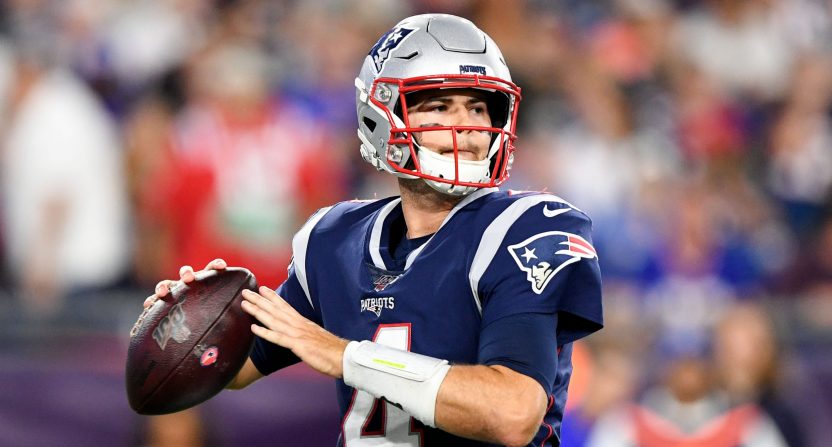 Everybody has a flaw or two, or 12. There’s no such thing as a perfect NFL roster. And some roster holes are a lot more glaring than others. Here are 10 big ones that could impact how the 2020 season plays out.

The Pats still have enough talent to make a run with Bill Belichick, but that won’t likely happen unless second-year fourth-round pick Jarrett Stidham can suddenly become a reliable starter. The Auburn product has thrown four career passes, one of which was intercepted. “There’s going to be some growing pains,” former New England offensive line coach Dante Scarnecchia recently said of Stidham, per CBS Sports. “There’s no doubt about it.”

This isn’t a high-profile hole, but it could make a huge difference considering quarterback Carson Wentz’ fragile nature, as well as the fact there are still questions about his weapons in the passing game. The Eagles need their offensive line to hold up big time, but they’ve just lost standout guard Brandon Brooks to a season-ending Achilles injury. That could put a lot of pressure on Isaac Seumalo, second-year left tackle Andre Dillard, and Wentz himself.

Same deal for Baltimore. The Ravens won 14 games last year, but Pro Bowl guard Marshal Yanda has since retired, and neither Bradley Bozeman nor Ben Powers are proven long-term solutions. With center Matt Skura coming off a torn ACL and a dislocated kneecap, the interior offensive line could be problematic for an offense that relies heavily on the running game.

It’s utterly shocking that the Packers didn’t make more of an effort to support top wide receiver Davante Adams this offseason. Right now, they’re left with Allen Lazard, Marquez Valdes-Scantling, Equanimeous St. Brown, Jake Kumerow, and Devin Funchess fighting for the right to start. Ideally, all of those guys would be depth receivers only. Throw in a lack of talent at tight end, and quarterback Aaron Rodgers will likely have his work cut out for him in 2020.

The Vikes said goodbye to their top three corners from last season in the offseason, and they didn’t have the money to replace them with options that give you much confidence. Third-year first-round pick Mike Hughes has yet to come through, but will play a huge role alongside rookies Jeff Gladney, Cameron Dantzler, and Harrison Hand.

The Titans made a run to the AFC Championship Game last year, and will expect another charge with Ryan Tannehill and Derrick Henry back following breakout campaigns. But Harold Landry was the only Tennessee edge defender with more than a handful of sacks last season, and nobody on the team had 15 quarterback hits. No wonder the team won’t rule out signing Jadeveon Clowney. The Titans might need that extra punch on defense to contend in 2020.

Tampa is looking to make a Super Bowl run with Tom Brady and Rob Gronkowski, but pass coverage could be a problem if the team’s stacked defensive front can’t dominate on a consistent basis. Recent second-round picks Carlton Davis and Sean Murphy-Bunting are expected to start, and there isn’t much depth beyond that. A lack of experience at corner could prevent the Bucs from getting Brady his seventh ring.

Francisco Lindor and Jose Ramirez hid behind the umpires, justifiably.

Francisco Lindor and Jose Ramirez hid behind the umpires, justifiably.