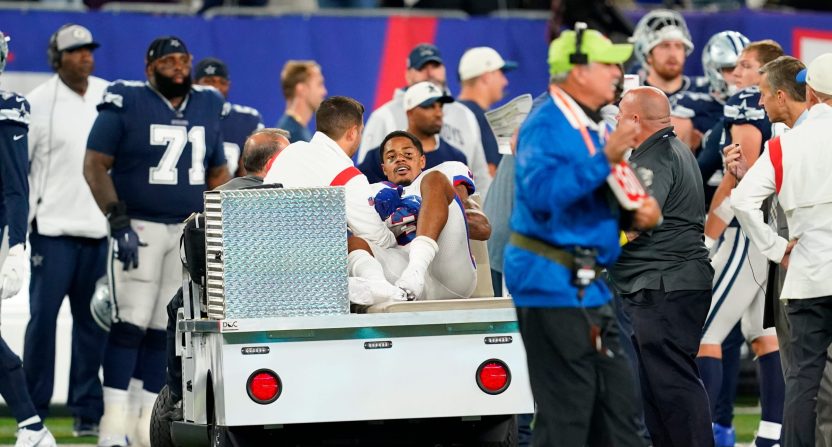 The final offensive play for the New York Giants against the Dallas Cowboys on Monday Night Football went quite poorly.

And on the other side of the field, New York wide receiver Sterling Shepard collapsed to the ground with a non-contact left knee injury. He was carted off of the field.

Sterling Shepard — the Giants' top receiver on the night — was carted off after suffering a non-contact leg injury on New York's final offensive play. pic.twitter.com/6Q4coDoaRt

Cowboys and Giants players both huddled around Sterling Shepard after his injury 🙏❤️ pic.twitter.com/I5HlvC7vLs

That Sterling Shepard injury might be the freakiest, most random, most innocuous major injury I’ve ever seen.

I have absolutely no earthly idea how that happened, and it just sucks.

So, that’s a brutal way to end the game, and it’s particularly awful for Shepard, of course.

After Monday night’s game, New York head coach Brian Daboll said that he feels “terrible” for Shepard, and added that Shepard will undergo more tests. The Giants will have more information about the injury by Tuesday morning.

Brian Daboll on Sterling Shepard: “I just feel terrible for the guy.”

Shepard, 29, was the Giants’ leading receiver on the night with five receptions for 49 yards. He also leads New  York with receiving yards this season at 154 over 13 receptions.

In 2021, he was limited to seven games after suffering a torn Achilles, and he last played more than 12 games in 2018. When on the field, he’s always been productive.

This is another hit to a Giants’ wide receiver room that has featured disappointments, injuries, and players seemingly in Daboll’s doghouse; Kenny Golladay, Kadarius Toney, and Darius Slayton are among the players that fall into those categories. Rookie second-rounder Wan’Dale Robinson could see an expanded role eventually, but he missed Monday night’s game with a knee injury.

The Giants will host the Chicago Bears in Week 4 action on Sunday afternoon.

UPDATE: The Giants announced on Tuesday that Sterling Shepard tore his ACL.