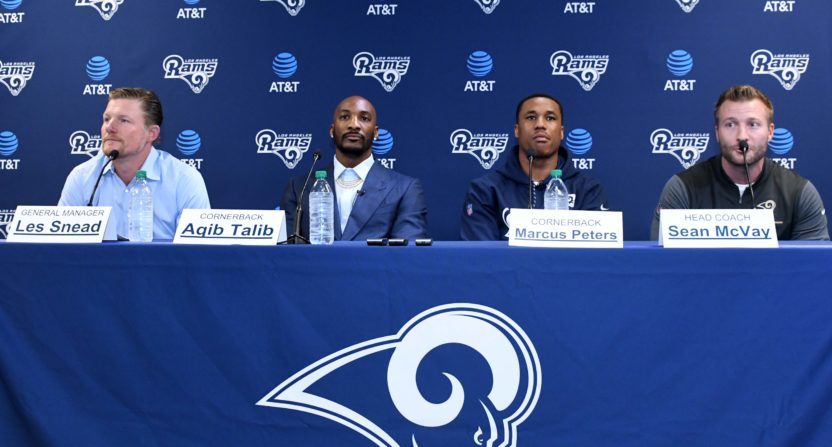 Five of the seven teams that won more than 10 games in 2017 played in the NFC. And two of the AFC’s three 9-7 teams made the playoffs, while all three of the NFC’s 9-7 squads missed out on the postseason. What’s more, NFC teams beat AFC teams head-to-head in 42 of 65 matchups last year, including Super Bowl LII.

In other words, the conference that once won 13 consecutive Super Bowls has really begun to dominate its younger counterpart after losing four out of five Super Bowls prior to 2017.

And the discrepancy looks as though it’s about to grow, because NFC teams have been crushing it this offseason.

The 13-win Minnesota Vikings gave Kirk Cousins the largest contract in NFL history, the Super Bowl champion Philadelphia Eagles traded for both Michael Bennett and Daryl Worley, the 11-win New Orleans Saints look even better with Demario Davis and Patrick Robinson on board and the starry Los Angeles Rams have basically become a super-team with the addition of Ndamukong Suh, Brandin Cooks, Marcus Peters and Aqib Talib.

The Rams acquired Peters from the Kansas City Chiefs (AFC), Talib from the Denver Broncos (AFC) and Cooks from the New England Patriots (you guessed it). And while New England willfully dealt Cooks away, all they got was a draft pick in return. So right now at least, the Rams have improved tangibly and the Patriots have not, which isn’t good considering New England had to fight to get to the Super Bowl before embarrassing itself defensively against Philadelphia.

Cooks isn’t the only high-quality player the Pats will be without in 2018, because they also saw stalwart left tackle Nate Solder leave town for the NFC’s New York Giants, while also losing veterans Malcolm Butler, Dion Lewis and Danny Amendola (albeit to AFC peers).

The Pats, Pittsburgh Steelers and Jacksonville Jaguars should again be considered Super Bowl contenders, but the Patriots are thinner than they’ve been in years, the Steelers have a lot of question marks beyond (and even including) the Killer B’s and Blake freakin’ Bortles remains the quarterback in Jacksonville.

Beyond that? The rest of the AFC East sucks, nobody except Pittsburgh is going anywhere in the AFC North, the Tennessee Titans and Houston Texans are second-tier contenders at best in the AFC South and there are major questions surrounding the Indianapolis Colts, as well as every team in the AFC West. (Jon Gruden thinks it’s 1997, Patrick Mahomes is now the starting quarterback in Kansas City, the Broncos are putting all of their eggs in Case Keenum’s basket and the Chargers are the Chargers.)

It’s no coincidence that five of the top six picks in the 2018 NFL Draft belong to AFC franchises.

The NFC boasts the league’s four best teams with Los Angeles, Minnesota, New Orleans and Philadelphia. But the conference also has the NFL’s top candidates for bounce-back seasons: Green Bay with a healthy Aaron Rodgers, Dallas with an un-suspended Ezekiel Elliott, the Giants with Odell Beckham Jr. back and the Falcons, now that they’ve recovered from their Super Bowl hangover.

Additionally, the league’s top breakout candidates are in the NFC. Watch out for the Bears under new coach Matt Nagy in Year 2 for Mitchell Trubisky, and ditto for the 49ers in their first full year with Jimmy Garoppolo under center.

The NFC is stronger at the top, stronger in the middle and stronger at the bottom. I don’t remember a time when one conference was this much better than the other, and the 2018 offseason has really driven that home.