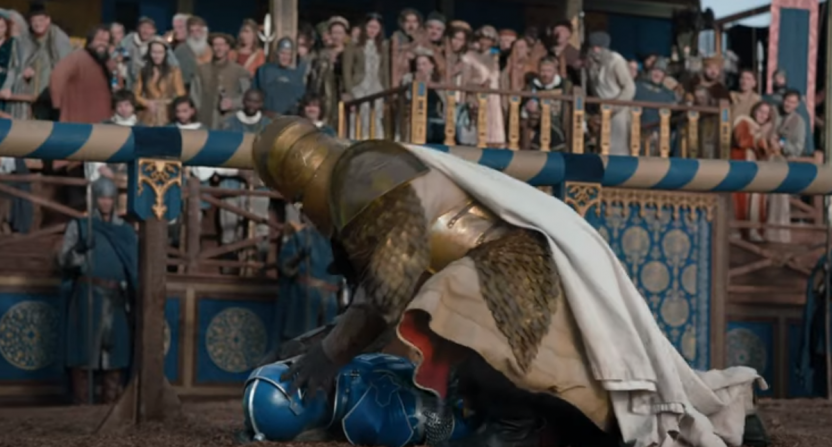 Up front: this is a post about commercials, which is exactly what the #brands are hoping for when they shell out millions for Super Bowl ad time. But this one specific commercial is worth writing about:

It was even more fun when The Mountain (or what’s left of him) went full Oberyn on the Bud Knight, which (because commercials) we already have a deep read on thanks to the Wall Street Journal:

The brewer allowed a 60-second Bud Light spot to double as a “Game of Thrones” promo and reluctantly consented to sacrifice the Bud Knight, one of its most visible fictional pitchmen, who died violently in the ad.

The production was an epic undertaking, with input from two of the nation’s top creative agencies and a “Thrones” director. Several ideas were scrapped to avoid stirring speculation over the show’s plot, or making the knight’s death too graphic.

The ad that aired Sunday is the centerpiece of an estimated $20 million marketing blitz for the final season of “Thrones,” according to a person familiar with HBO’s marketing plans. The season premieres on April 14.

There’s also an extended version, if you really want to get the director’s full, unadulterated vision (it’s 30 seconds longer):

Let’s hope this can also be the end to the Bud Light middle ages ad campaign, which has been grating for some time, a big part of why the Bud Knight murder was so entertaining in the first place. We almost got an even darker version; whenever execs have to discuss toning down the skull crushing sound effects you know you’re in uncharted territory for a Super Bowl ad:

When HBO made its approach in August, Bud Light executives and its ad firm Wieden + Kennedy learned this wasn’t going to be an ordinary ad: The script called for the Bud Knight to get his head crushed while fighting the Mountain, a fearsome warrior, in a joust—a nod to the way the Mountain killed Oberyn Martell in season 4.

Bud initially agreed. But uneasy with the violence, the company wobbled as filming began—even suggesting alternative ideas such as having the Knight get beaten up, but live.

HBO’s Marketing Chief Chris Spadaccini said he made it clear: “The Bud Knight had to die.”

Bud insisted that the violence and even the sound of the skull crush be dialed back.

Had Bud not gone along, HBO was apparently prepared to approach other partners, including Coke, which means we almost got a Coke polar bear turning into a white walker. Seriously:

HBO considered several potential partners, including car makers and Coca-Cola Co. The beverage giant was never approached, but HBO had envisioned pitching a script that involved having Coke’s iconic polar bear turn into a “white walker,” a zombielike creature from the show.

That would have been genuinely disturbing, because way more people like the Coke polar bears than liked the Bud Knight. It ended up being more entertaining than a trailer would have been, and while it is slightly disappointing to have a show so eagerly throw characters into the world of advertising, it’s hard to argue with how this one ended up.