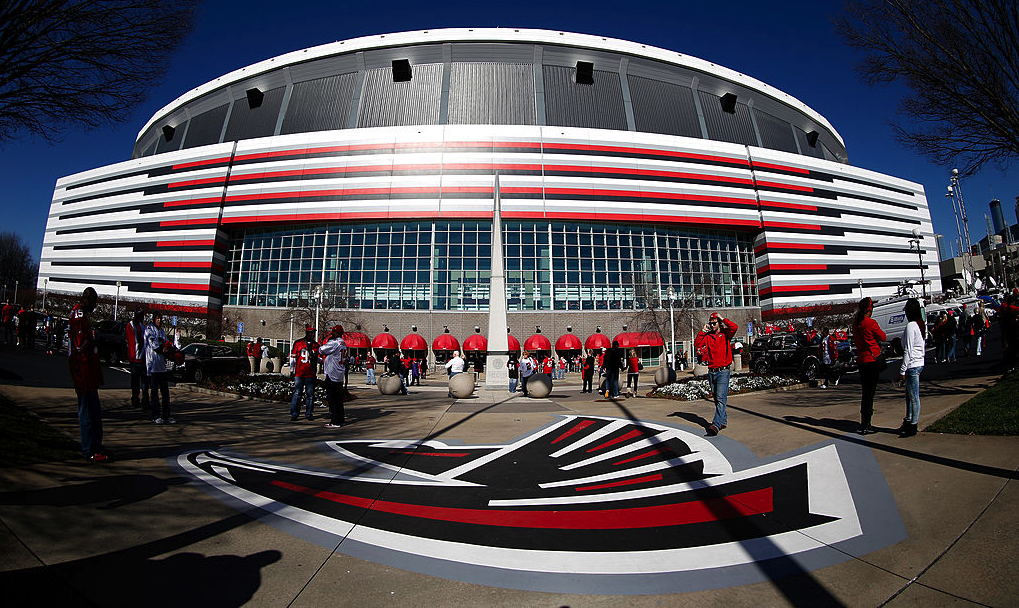 Atlanta’s Georgia Dome opened in September 1992 and since then, it’s crowned champions of every sort. Every SEC Football Championship Game has been played there, as has every Peach Bowl and Atlanta Football Classic since 1992 and recently, the Celebration Bowl took up residence there as well.

But the Georgia Dome has never had a chance to hand out hardware to its primary resident, the NFL’s Atlanta Falcons.

That may all come to an end this Sunday.

The Falcons have hosted the NFC Championship Game once before, and lost 28-24 to the San Francisco 49ers in 2013. They’ve been there two other times, winning one (at Minnesota in 1999) and losing another (at Philadelphia in 2005). Those, like the other championships won in the 25-year old building, weren’t the Georgia Dome’s to claim.

If Atlanta can beat the Green Bay Packers, the Georgia Dome’s final (football) game would grab that elusive title and give the building a proper goodbye before it’s replaced by the shimmering Mercedes-Benz Stadium in the fall.

Until recently, the Falcons weren’t really ones to cooperate with such a party at the Dome. Founded in 1967, Atlanta wouldn’t have its first winning season until 1971 and their first playoff appearance wasn’t until 1978. The Falcons made the playoffs just five times from 1967 until the magical 1998 season of the “Dirty Bird.”

Led by quarterback Chris Chandler, running back Jamal Anderson, receiver Terance Mathis and countless other standouts, Atlanta shocked the league en route to a 14-2 record, but still ended up with the NFC’s second seed behind the 15-1 Minnesota Vikings. The Falcons would eventually beat Minnesota 30-27 in overtime (the first overtime game in the history of the NFC Championship Game) to make it to their first and only Super Bowl. Falling to the Denver Broncos wasn’t the preferred outcome once there, but it remains the franchise’s greatest season to-date.

Atlanta has built on things since that time, though. The results immediately afterward were not ideal – the core of that Super Bowl team was largely gone by 2001 – but those also led to drafting Michael Vick. Following Vick’s arrest and suspension for his involvement in dog fighting, the team drafted current quarterback Matt Ryan.

Between the Vick and Ryan eras (2002-present), Atlanta has made the playoffs more times (seven) than they did from 1967-1998. They’ve won four postseason games in that stretch, but none have resulted in an NFC Championship.

The Falcons are favored by four over the Packers, according to Vegas, but that advantage could largely be chalked up to home field. Green Bay has also won eight straight games (including last week’s thriller over the top-seeded Dallas Cowboys), which places further disregard on the small betting line. Still, Atlanta may want to be seen as the favorite going in.

Dating back to 1999, the home team is 11-6 in NFC Championship Games, including wins in the last three straight. In the Georgia Dome-hosted SEC Championship Game, the higher-ranked team has won eight in a row dating back to 2009, and has won 13 of the last 15. None of those games have any true bearing on this one. But recent trends to favor the Falcons slightly – which is worth clinging to if you’re a long suffering fan of the team.

The Georgia Dome has already had two formal goodbyes, but that wouldn’t make Sunday’s redundant at all – especially if it’s for the home Falcons. The 2016 SEC Championship Game was a coronation for Alabama in a blowout over Florida. And really, it was more about saying goodbye to beloved broadcaster Verne Lundquist than anything else. Atlanta’s home finale, a 38-32 win over the rival New Orleans Saints, was also less celebratory. The Falcons already knew they were hosting a playoff game afterward.

The 75-yard touchdown by #Falcons RB Devonta Freeman against the #Saints. Freeman goes over 1,000 on the season pic.twitter.com/XBnL85XBmr

Should they beat Green Bay, it wouldn’t just be a victory for the team, or the Georgia Dome, but also one for Atlanta, too. The de facto capital of the South has called a lot of teams its own, but the Falcons are the only one that has belonged to the city the entire time.

The Braves arrived in 1966 and have won plenty, but still hold just one World Series championship to show for 14 consecutive division titles (and others before and after). Atlanta’s had the Hawks since 1968, but they’ve yet to make an NBA Finals since arriving. The Atlanta Thrashers never won a playoff game and were moved to Winnipeg. Georgia Tech is in Atlanta, but the city probably has more Georgia fans than Tech supporters living within its boundaries.

Atlanta has beaten Green Bay before – this season and in previous playoff matchups. The Falcons actually kicked off the modern era of success (starting with Vick) by upsetting the Packers in a Wild Card game at Lambeau Field – the first time Green Bay had ever suffered a playoff loss at home. And they pulled out a 33-32 victory over them in October, too. Aaron Rodgers may be playing like a man on fire, but the Falcons have been riding their own hot streak, winning six of their last seven.

At 3:05 p.m. ET on Sunday, the Georgia Dome will begin its final football game. The home team will try to give it a proper, fitting sendoff with an NFC title. But if they can’t, they won’t be playing in vain. This venue’s also been one of high stakes matchups after all, even if they do rarely involve the Falcons.