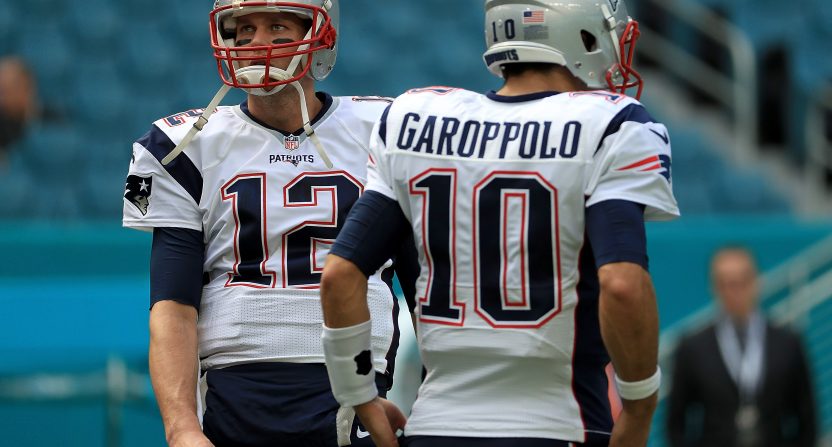 Maybe the Browns have some idea of what they’re doing. According to cleveland.com, they are still going after Patriots backup Jimmy Garoppolo and will try to use the 2018 second round pick acquired from the Texans earlier Thursday in an offer to New England.

So this whole Brock Osweiler trade was obviously not actually about getting Osweiler. If Cleveland makes it work and Garoppolo winds up being as effective in Hue Jackson’s system as he was in limited appearances under Bill Belichick, the Browns will look pretty smart.

But if New England still won’t budge and the Browns wind up eating Osweiler’s $16 million contract all for a second round pick, well, then they’ll still have come out okay. They didn’t need that cap space this season anyway.

According to the cleveland.com report, the Browns are willing to part with their 12th overall pick in this year’s draft and at least one of next year’s second round picks for the Pats backup. Earlier this week, Mike Garafolo (these names are so confusing!) of NFL Network reported that the Patriots now want two first round picks for Garoppolo.

The Browns do have another first rounder this year. But it’s the first overall pick, and they are pretty set on holding on to that to select defensive end Myles Garrett. It’s hard to imagine an unproven asset like Garoppolo being worth any first overall selection, but the Patriots hold the leverage for now.

Their demands might slide a bit as the draft approaches.