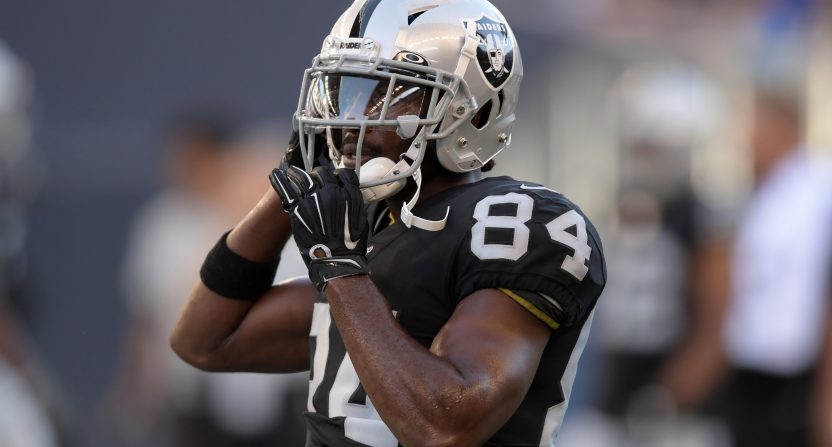 It seems as if the NFL news cycle thus far in the 2019 season has been about one man – Antonio Brown. The entire sports world has seemingly revolved around the star receiver’s every move as he forced his way out of the Oakland Raiders following one absurd episode after another and immediately signed with the New England Patriots.

Even though Brown’s preposterous Raiders tenure is over, the drama that follows him around most certainly is not. And this time it’s not about what helmet he wears or what ridiculousness he posts on social media. This time it’s much more serious than anything football related.

On Tuesday evening, the New York Times reported that Brown had been accused of sexually assaulting his former personal trainer on multiple occasions in a federal lawsuit filed in the Southern District of Florida.

New England Patriots receiver Antonio Brown has been accused of raping his former trainer, according to a federal lawsuit filed Tuesday in the Southern District of Florida.

The lawsuit says that Brown — in three separate incidents, two in June 2017 and another in May 2018 — sexually assaulted a woman named Britney Taylor, a gymnast whom he met while they were attending Central Michigan together and whom he later hired as a trainer.

Brown’s accuser Britney Taylor is quoted in the Times piece regarding her decision to come forward and file the suit:

“As a rape victim of Antonio Brown, deciding to speak out has been an incredibly difficult decision,” Taylor said in the statement. “I have found strength in my faith, my family, and from the accounts of other survivors of sexual assault.”

Brown’s lawyer, Darren Heitner, posted this statement on behalf of Brown on Twitter denying the allegations.

The lawsuit detailing the allegations against Brown can be found at this link. It alleges that Brown assaulted her twice in June 2017 and once in May 2018. In the introduction to the suit, Taylor and her attorneys allege the following:

This case is about how Antonio Brown – a highly successful wide receiver in the National Football League (“NFL”) – exploited, sexually assaulted, and raped his former trainer Britney Taylor. Brown preyed on Ms. Taylor’s kindness and her religious devotion, casting himself as a person equally dedicated to his religious faith and someone she could trust. In reality, he used manipulation and false promises to lure her into his world, and once there, he sexually assaulted and raped her. These heinous acts have inflicted severe and dramatic damage on Ms. Taylor, irreparably harming her.

As of this time, there is no response from the Patriots or the National Football League on Brown’s current playing status, but the allegations are quite disturbing and overshadow anything football-related that has occurred over the last week with Brown.