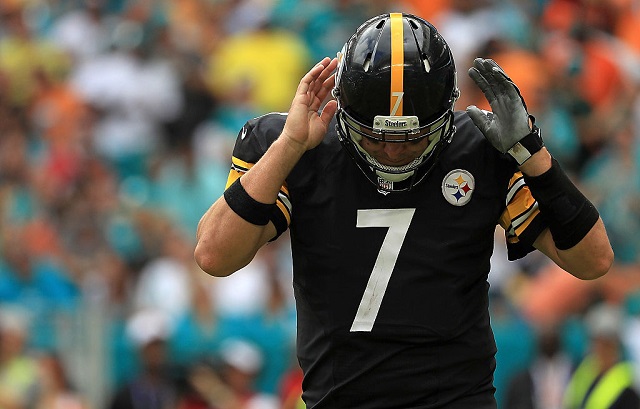 Not only did the Pittsburgh Steelers suffer an embarrassing Week 6, 30-15 road loss to the then-one-win Miami Dolphins, they also suffered a bigger loss in the game when starting quarterback Ben Roethlisberger went down with a knee injury in the second quarter. Ruled a meniscus tear in his left knee, Roethlisberger underwent surgery on Monday.

With the Steelers’ Week 9 bye looming, the quarterback is optimistic he can return in Week 10 to face the Baltimore Ravens. However, he has already been ruled out for Sunday’s game, a home contest against the formidable New England Patriots.

However, it may be more realistic to take the conservative approach with Roethlisberger’s latest injury. He could be out as many as four to six weeks, with the quarterback telling Ron Cook of the Pittsburgh Post-Gazette on Monday, “Doc says my knee looked good, but there still was some stuff in there from when I had my bone bruise last season in St. Louis,” referring to the injury that cost him four games in 2015. Roethlisberger continued, “He said that might keep me out a little longer than just a simple meniscus tear. Maybe an extra week or so. But there’s no way to put an exact timetable on it.”

This means that for the time being — whether for just Week 7 or longer than that — Landry Jones will be serving as the Steelers’ starting quarterback. Jones, selected by the Steelers in the fourth round of the 2013 NFL Draft, has started two regular-season games, both in 2015. He had a completion percentage of 58.2 on the year and threw three touchdowns to four interceptions. There’s no question that Pittsburgh’s high-powered offense will take an appreciable step backward with Jones under center. While he should have a strong understanding of coordinator Todd Haley’s system, that doesn’t mean his execution can match that of Roethlisberger’s.

But the hit the offense will take on Sunday against the five-win Patriots — and perhaps longer, depending on Roethlisberger’s recovery — isn’t the only problem the Steelers are facing. Take, for example, the loss in Miami. The Steelers defense gave up 222 rushing yards and three touchdowns on 36 Miami attempts, mainly due to mounting injuries on the defensive side of the ball. The team was already without defensive end Cameron Heyward — their best defensive player — with a hamstring injury that will have him out through the bye week. Linebacker Ryan Shazier was on his third straight absence with a knee injury, and his return against the Patriots is no guarantee. Safety Mike Mitchell exited the game with a knee injury and defensive end Stephon Tuitt also suffered an injury of unknown provenance; both of their statuses for Sunday are also unknown.

No Shenanigans Player of the Week:

Jay led the ground attack in the upset over PIT. pic.twitter.com/wJ6scje1QD

The defense has also struggled to stop opposing passing games, much as it did a year ago. Currently, the Steelers rank 30th in passing yards allowed, while only intercepting three passes and sacking quarterbacks a mere eight times. Miami quarterback Ryan Tannehill, who had been sacked 17 times through the first five games of the season, wasn’t taken down once by Pittsburgh’s defense. Given that Tom Brady is ahead this week, followed by Joe Flacco and then the Dallas Cowboys with Dak Prescott in the two games after the bye, and it’s not hard to imagine the Steelers struggling even if their key defensive starters are healthy by then. This team struggled with them in the lineup as well.

The Steelers have proven numerous times that their offense is good enough to carry their weaker defense. But Pittsburgh has had issues doing that, both this year and historically. As Mark Kaboly of DKPittsburghSports.com pointed out, the team is 5-11 on the road in their last 16 games (including Miami) against teams with a sub-.500 record. Meanwhile, ESPN’s Mike Clay has noted the horrible recent stat lines on the road for three of the Steelers’ top receivers, Antonio Brown, Eli Rogers and Sammie Coates:

Pittsburgh’s next three road opponents — the Ravens, Cleveland Browns and Indianapolis Colts — are all below the .500 mark and could believably stay that way when the Steelers come to their towns (Weeks 9, 11 and 12, respectively). Even should Roethlisberger come back in time for all of these games, that doesn’t guarantee Steelers victories. It certainly helps — again, Jones will be an appreciable step back from Roethlisberger — but the problems for Pittsburgh extend to myriad areas on both offense and defense.

In a team sport, even the quality and experience of the quarterback can often not be enough to mask them all. Losing Roethlisberger for the short term is clearly the immediate issue the Steelers are facing. But these other pervasive issues on defense and when playing on the road are long-term and longstanding, and require solutions for this team to remain considered true contenders this season.