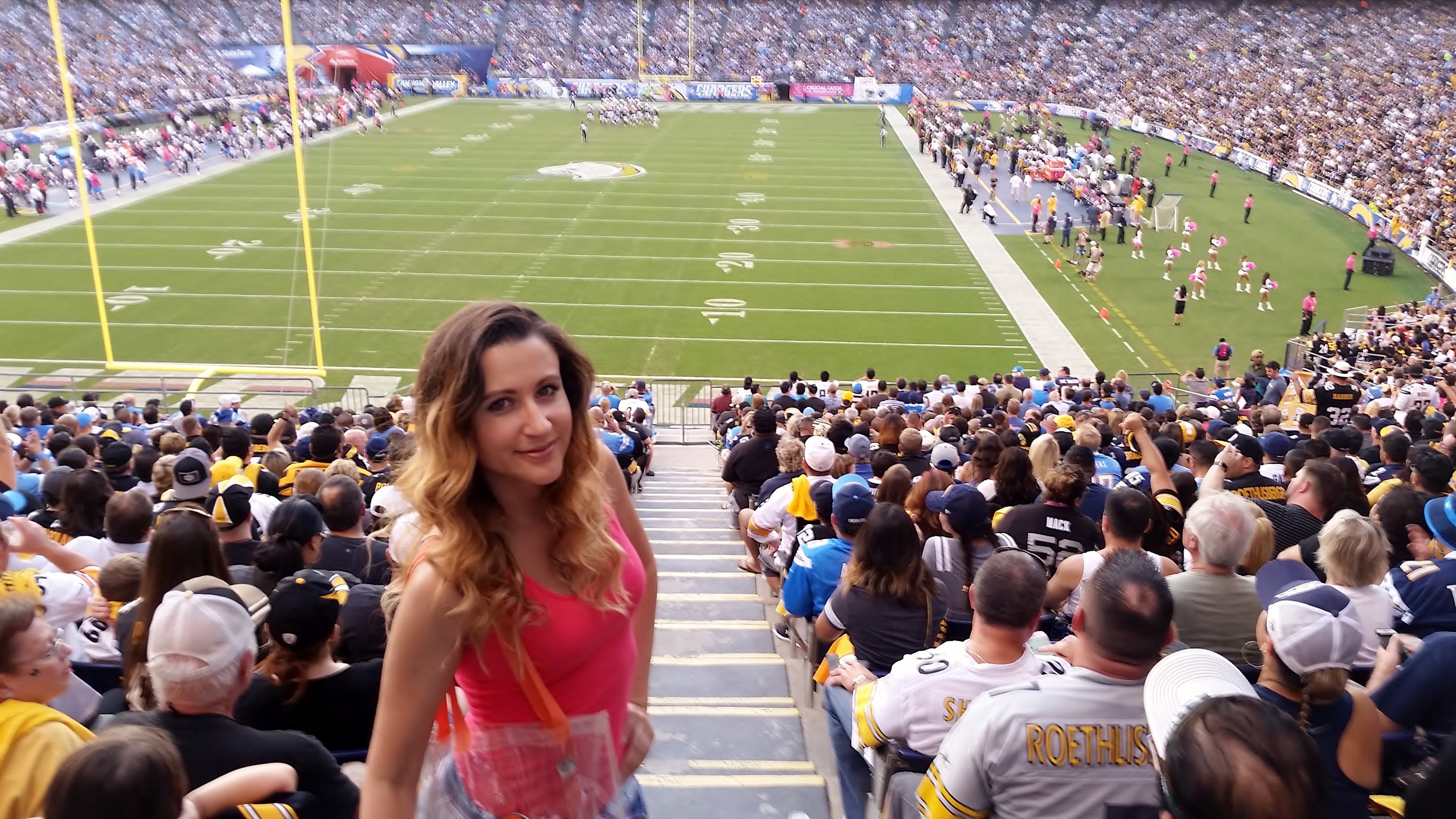 It all started on Tinder.

Alicia Barnhart, a self-described “sports travel enthusiast,” had been to hundreds of baseball games in dozens of parks, including all 30 in one summer. And along the way, she had a blog called Ballparks on a Budget, which provided reviews and planning guides for every MLB stadium. But the NFL was foreign territory.

Then, after receiving inspiration from a man she met on Tinder, Barnhart embarked this fall on her most ambitious venture yet: a trip to see a game at every NFL stadium in world-record time.

After saving money all summer, she quit her job as a sports radio producer on September 11 and commenced her odyssey two days later, watching the Raiders play the Bengals in Oakland. Eighty six days later, Barnhart saw her hometown Cleveland Browns face the Ravens at FirstEnergy Stadium to complete her trip and earn her an official Guinness World Record.

The Comeback caught up with Barnhart this week to hear about the ins and outs of her record-breaking trip.

The Comeback: After years of travelling to baseball stadiums, how did you get the idea for this NFL trip?

Alicia Barnhart: I happened to be on a Tinder date last February with a guy who works in sports, and he’s like “oh my gosh you should totally do the NFL.” He could tell I was a little bored with baseball. I kept going to the same places. I was thinking about going to Japan to check out their baseball league.

So then I was like, hm football. I’m a big football fan, and it sounded like fun, and I was thinking about it, and then I talked to my friend, through blogging, who has the MLB record for Guinness, with MLB stadiums, and he was like “Oh, you should do the NFL because that record hasn’t been broken since 2002.”

So I started looking into it, and I was decided this is it, I’m doing it. 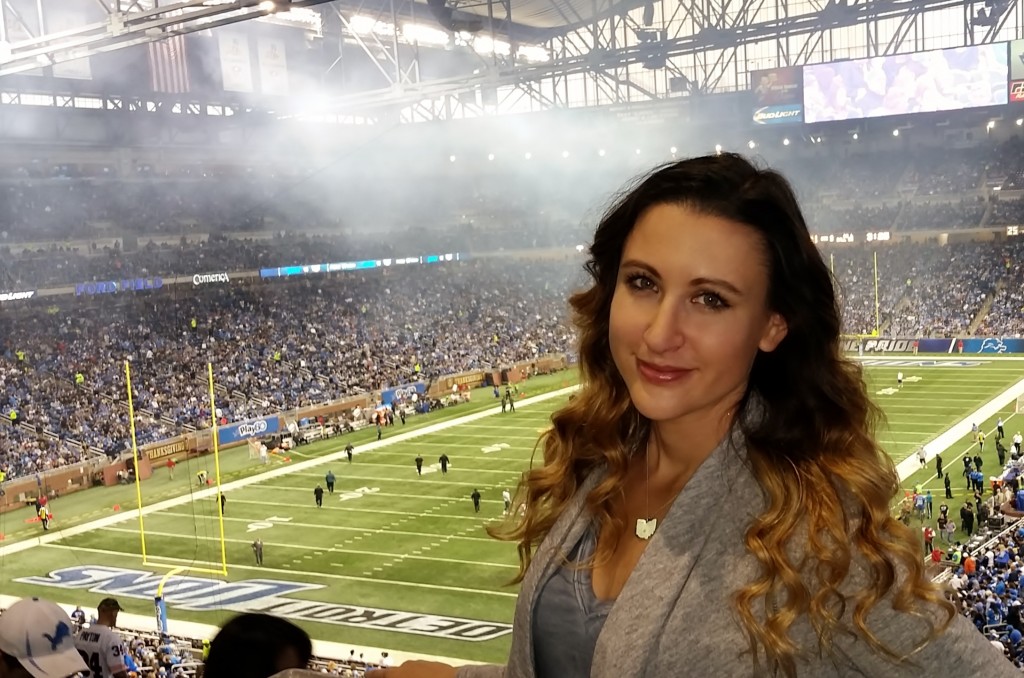 TCB: You visited 32 stadiums in only 12 weeks, which sounds impossible. Were you worried when you started to plan that the whole thing wouldn’t work?

I got lucky that Oakland was playing a Sunday game and then San Francisco was playing the Monday game right after. I tried to be a little strategic on planning, but for the most part I wasn’t. There was a day I was in Atlanta, had to go out to San Diego and then came back to New Orleans. I was all over the place for a little bit. It was screwy, but it was just trying to get it down to the lowest number of days to beat the record [previously 107 days]. I didn’t want to beat it by like a day. I wanted to destroy it. 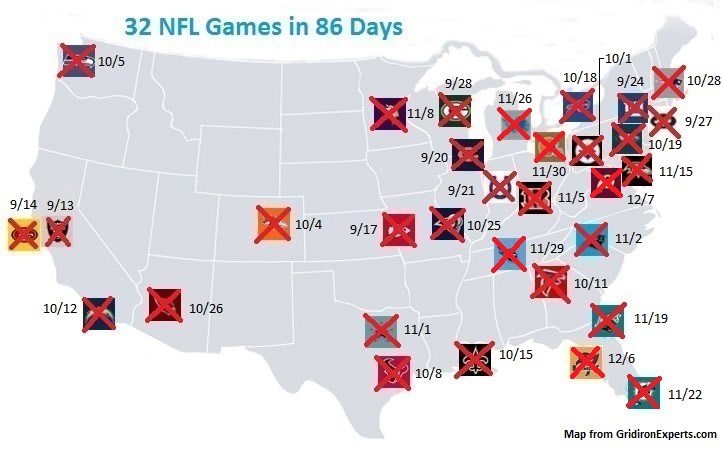 TCB: It sounds like your trip was pretty meticulously planned. Were there any close calls or anything when you weren’t sure you would get somewhere in time?

AB: Oh yeah. There were so many times. I bought the ticket to the Denver Broncos game from a tickets distributor, and it said in the email you can use your phone to get in. So I’m trying to pull it up, and I’m just not getting any signal in Denver. Then I finally do get some signal and they’re like, “Oh no you can’t use your phone to get in here, you have to print out the ticket. You can go to the ticket office or you can go print it out.”

So I went to the ticket office and the girl was not helpful, and she said I might have a fake. And I’m like, well I bought it from a reputable place. So I’m waiting, waiting, waiting and I’m starting to freak out that I wasn’t going to get in because you have to be in for the entire game for it to count. And I had to find an usher as a witness [for Guinness] before the game started too, so it was double [pressure]. So I finally got in about 10, 15 minutes before the kickoff. I had to wait in line, and by that time it was so close to game-time that it was hard to get through. I don’t get how people don’t understand metal detectors.

TCB: Were you attending these games alone or did you have friends come?

AB: Sometimes my friends came if they wanted to come, but I went to most of them alone. I kind of like going alone because I explore the stadium, I don’t just stand in one spot. I want to write a review of the stadium as well. 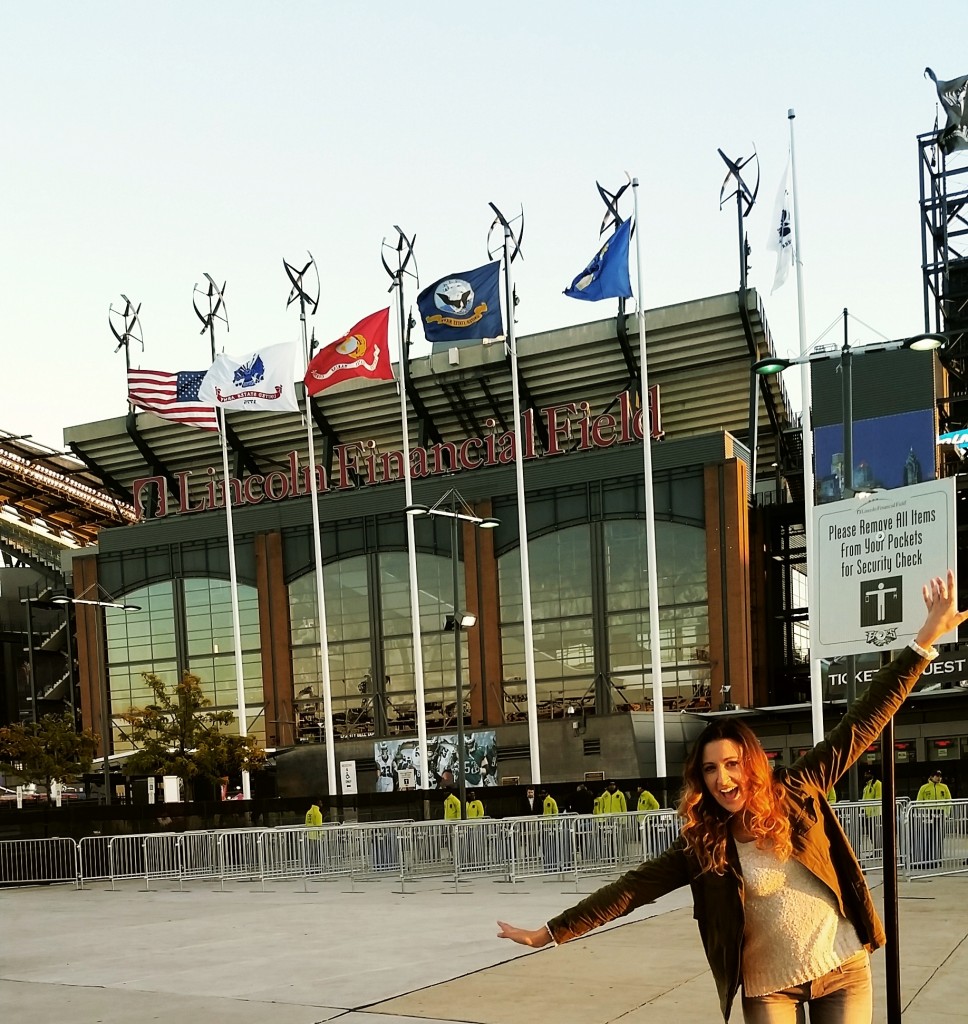 AB: It actually surprised me because I thought the same thing, but a lot of teams are making renovations. I had been to Paul Brown Stadium three or four years ago, and I thought it sucked. … And then I was just there a couple months ago and I thought why is it so different? It looks a lot nicer. And I asked the girl that met me from the team and she said, “Oh yeah we just did renovations.”

TCB: What was your favorite stadium?

AB: My favorite was pretty typical: Lambeau. When I first got there I was trying to keep my excitement down because sometimes when I have too high expectations, and that totally ruins it, and I don’t like it. But I got there and I didn’t think the outside was very impressive, and then I went into the atrium that they built, and it looked like a mall, and I was like “Ew, why do people like this stadium?” But then when I walked into the field it felt intimate. It just reeks of sports history. You have to have a real cold heart to not like it. 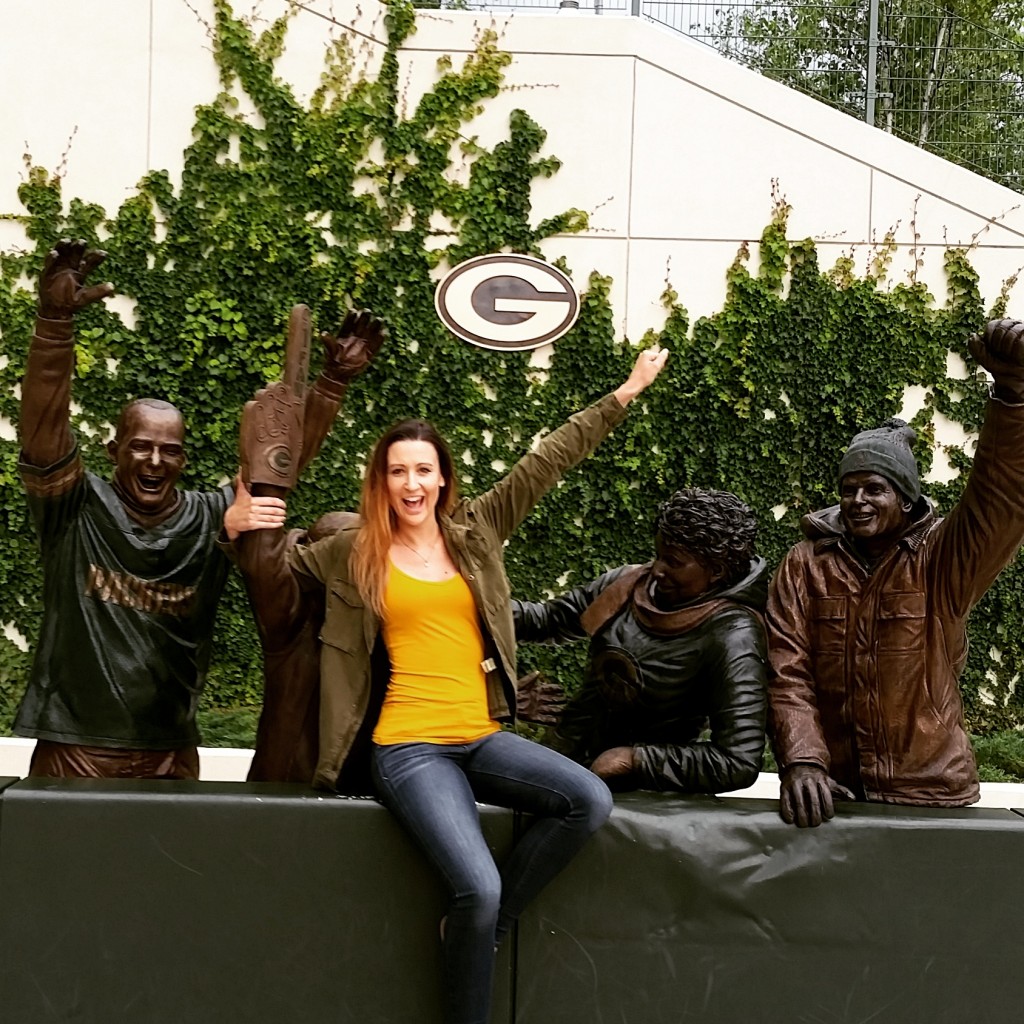 TCB: Was there one stadium people wouldn’t expect that you found interesting or charming?

AB: I liked Arrowhead a lot, down in Kansas City. It’s really, really hype the entire game. The atmosphere and the tailgating before the game … the parking lots are just packed with people tailgating and Kansas City barbecue. It’s a good time.

TCB: What was the highlight of your last few months? 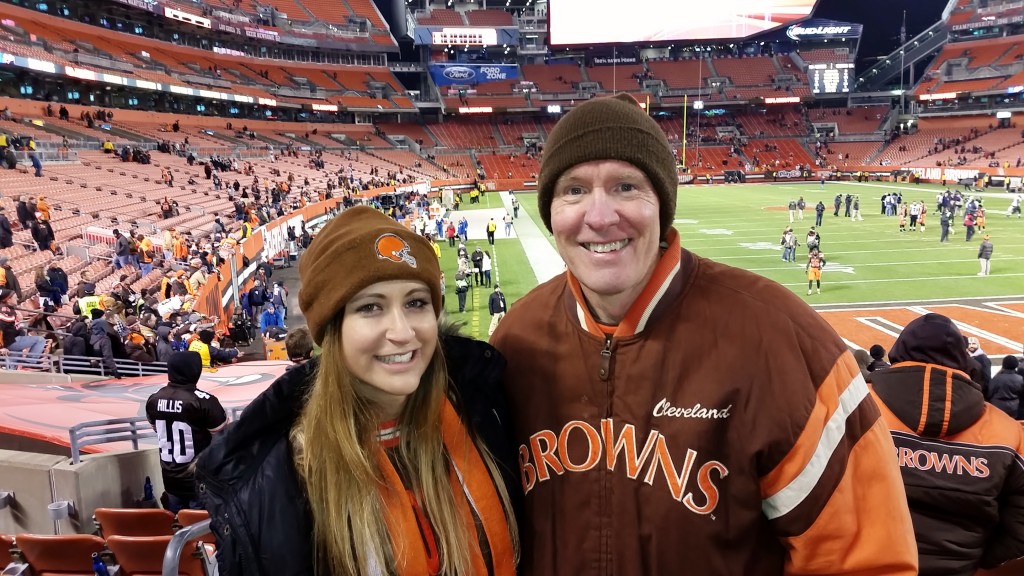 TCB: You mentioned the process of being verified as a world record. Was that hard, stressful?

AB: It was a little stressful. I contacted all the teams. Most teams got back to me. I had about six that never replied, so I had to get ushers from their stadiums, so that was a little stressful not knowing if the usher was going to, when Guinness called or emailed, vouch that they had seen me at the game. There were some teams that were so nice to me, and they gave me press pass — the Bengals gave me two tickets. There was some awesomeness.

But I needed a witness, and I also had to have pictures and video, and I even had to track myself the entire three months and send them all that information. It was a little bit overwhelming. It was surprisingly more involved than just showing up at games.

TCB: What was that moment like when you found out (a week and a half after sending in the information) you had officially earned a world record.

AB: There might have been some squealing. I was at home — I live with my aunt and uncle right now — and I ran out and there was some high-fiving. My uncle just retired, so he said enjoy the record because he’s going to go after it. 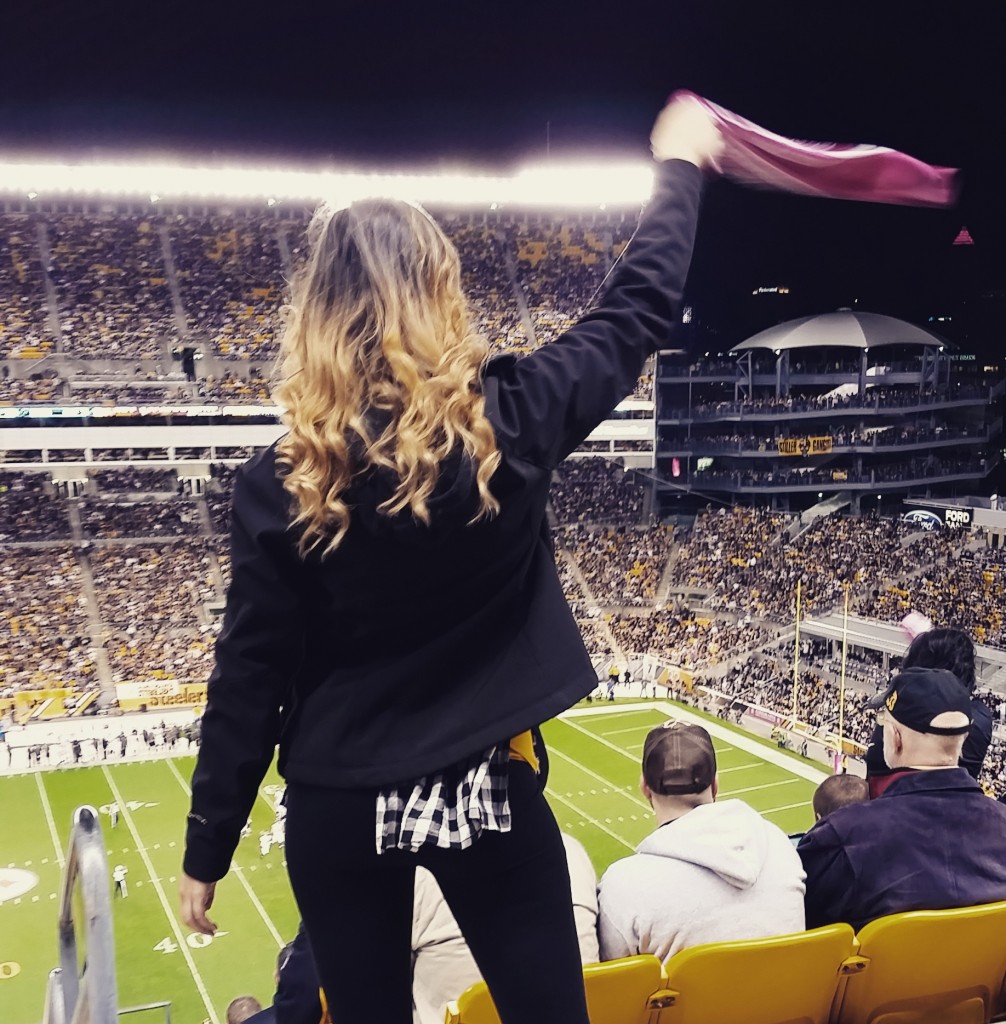 TCB: Are you nervous that somebody will come and steal your record?

AB: I would be fine with it because I had the experience. So good luck!

TCB: With all the travel troubles and saving money and some issues with housing, was the trip worth it?

AB: Oh my gosh, yes! I had a blast. I loved it, I loved the challenge of it, saw a lot of friends I hadn’t seen in a while, and I just had a good time. It was totally worth it.

TCB: So I have to ask, what ever happened to the guy you went on the Tinder date with?

AB: Well, we didn’t find love, unfortunately. We still keep up with each other a little bit on social media, but he’s busy doing his thing. It is what it is. We both realized we were friends. There was no chemistry.

TCB: But he inspired your trip!

AB: Yeah, I’ll forever be thankful to him for it. Tinder is good for some stuff. 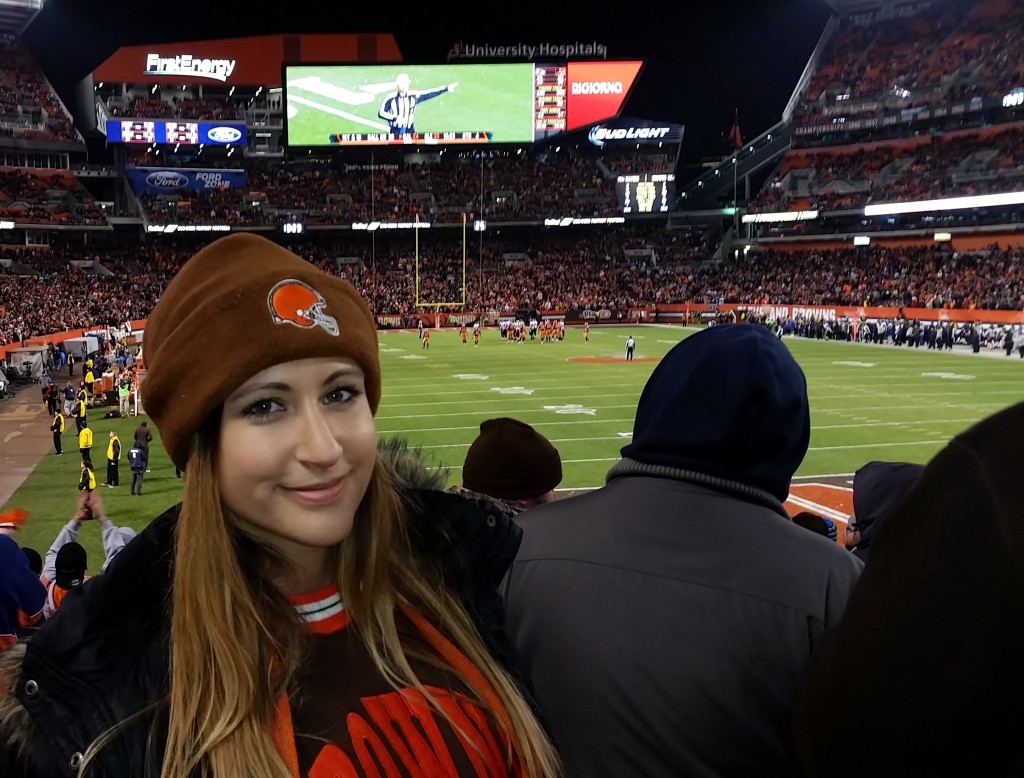 TCB: So what comes next for you? Another trip of some kind?

AB: I’m unemployed right now and looking. I was hoping that it would get picked up or sponsored and I would be able to do this — have a sports travel blog or web series where I can share this passion with other people who really like traveling to sporting events.