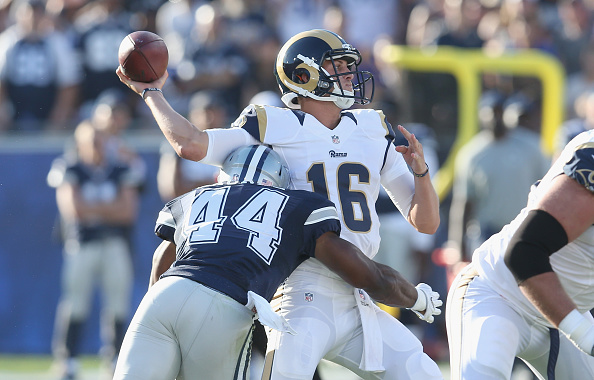 Time will tell if the Los Angeles Rams made a costly mistake drafting quarterback with the No. 1 overall pick in the 2016 NFL Draft, but it appears Goff will have some work to do. After fizzling out in his preseason finale on the road in Minnesota, all indications appear to be Goff will be third on the depth chart for the season opener next week.

Rams head coach Jeff Fisher said after a 27-25 setback against the Teddy Bridgewater-less Vikings it would be unlikely Goff starts the season as the team’s primary backup, which means he will get plenty of time to serve as an understudy before being bumped up the depth chart. That means the Rams will likely go with Case Keenum first and Sean Mannion second. In the preseason finale, Goff completed just six of his 16 pass attempts for 67 yards, although that did include a 30-yard pass. It was a rough night for Goff, which could best be summarized by this clip of Goff botching a snap out of the shotgun and falls flat on his face trying to recover. He didn’t. The Vikings did.

“I think it’s going to take a little bit more time,” Fisher said after the game. “That’s not to say he can’t be a (No. 2 quarterback) or start, but if we were starting right now, I’d probably have Sean as the two. Because it’s all about being patient with him.”

You’ll have to excuse Rams fans who feel being patient for the number one overall pick in the draft is not good news. It is not unprecedented for a highly drafted quarterback to have to sit and wait on the bench before being deemed worthy. The Philadelphia Eagles did it with Donovan McNabb and that worked out pretty well. The Eagles are doing the same thing this year with No. 2 pick Carson Wentz. The problem is Goff never seemed to show any progress in the preseason, and that should be a major concern.

Jared Goff has been an absolute mess this preseason. He can't hold onto the football and his numbers are garbage. pic.twitter.com/4BpiZWTZsb

Let’s just say the Rams’ quarterback situation has fallen off a cliff since having Kurt Warner. Those days were fun with The Greatest Show on Turf, right? It’s been a wreck since then. The Sam Bradford era never took off as planned and swapping him with the Eagles for Nick Foles was a mess as well. Now? Well…

Rams traded everything to get Jared Goff. Selected Sean Mannion in top 100 the year before. Now starting Case Keenum after having cut him.

The folks at Rotoworld really dug in on the Goff situation and left nothing to the imagination:

Fisher gushed about Goff’s “progress” in the same breath, but the reality is if Goff had actually made any progress, he would be the starter, not third-string caddie behind a former undrafted free agent and 2015 third-rounder. However Fisher — who is on the verge of becoming the NFL’s all-time losingest coach — spins it, Goff has had a majorly concerning summer. He looks slight of build, confused on the field and unsure of himself in the huddle. He’ll be a budding calamity if he doesn’t make some quick progress after the Rams mortgaged their future to move up to No. 1 overall. Playing behind a bad offensive line with subpar weapons and even worse coaching, the deck is stacked against the Cal product, just as it was Sam Bradford.

Let’s not hit the panic button on Goff just yet, but it is fair to suggest the Rams need to hope things turn around as the season progresses. Otherwise, they’ll be right back in the NFL Draft quarterback sweepstakes before they ever imagined they would have to be, and Fisher may not be around to spin it as he seems to be doing here.