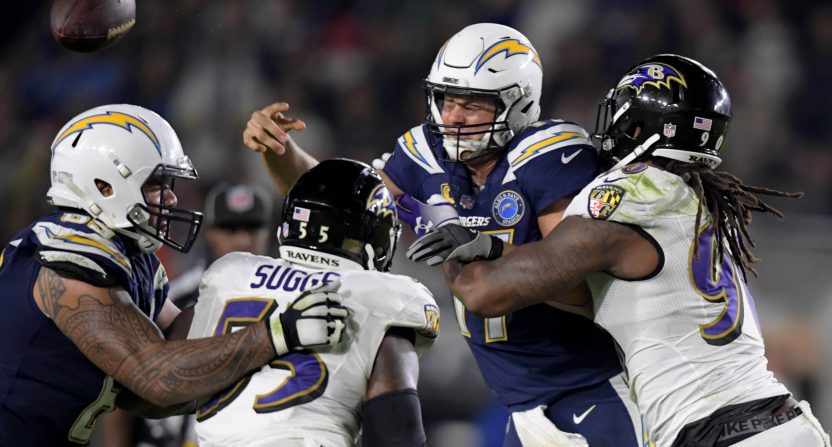 The Baltimore Ravens’ defense put on a show on Saturday night to come away with a 22-10 win over the Los Angeles Chargers in Carson, CA.

Baltimore held the Los Angeles Chargers to 198 total yards (3.5 yards per play) and constantly disrupted quarterback Philip Rivers in the pocket. Rivers — who entered the game as an NFL MVP candidate — completed 23-of-37 passes for 181 yards, zero touchdowns, two interceptions, and had a 51.7 passer rating. He even threw an interception on the game’s first play, but it took a tremendous effort from Baltimore cornerback Brandon Carr.

The Ravens also limited Melvin Gordon to 41 yards on 12 carries (3.4 YPC), and didn’t allow the Chargers to have an offensive play over 17 yards.

On offense for Baltimore, Gus Edwards, Lamar Jackson, and Kenneth Dixon combined to run 35 times for 159 yards (4.5 YPC). And Jackson did enough in the passing game, like on this dime to tight end Mark Andrews for a 68-yard touchdown.

It was a highly impressive performance against a Chargers team that entered winners of four straight, including victories in Pittsburgh and Kansas City. The Chargers (11-4) entered the game with a very real path to the AFC’s No. 1 seed.

The Ravens are now 9-6 on the season, and 5-1 under their rookie quarterback, with Jackson’s only loss coming in overtime on the road against the Kansas City Chiefs (11-3). Saturday night’s win not only greatly boosted Baltimore’s playoff chances (83% now on Five Thirty Eight), but they’re now even favored to win the AFC North (67% now on Five Thirty Eight). The Ravens need a win over the Cleveland Browns in Week 17, along with one loss from the Pittsburgh Steelers (who have to play at the New Orleans Saints this week) to win the division.

Per @ESPNStatsInfo, Ravens will clinch AFC North with a win over the Browns in Week 17 and Steelers loss in 1 of their final 2 games (Week 16 at Saints or Week 17 vs Bengals). That seems very possible.

And the Chargers are basically locked into a Wild Card spot with the loss. They would need to beat the Broncos in Denver, and have the Chiefs lose to the Seahawks (in Seattle, so this is very possible) and Raiders (in Kansas City; the Chiefs will be two-touchdown favorites). Five Thirty Eight gives this all just a 3% chance of happening.

We already knew the Chargers would be a very dangerous playoff team; they’re a well-rounded team that has shown to travel well with road wins over the Chiefs, Steelers, and Seahawks. But what the Ravens did on Saturday night was really eye-opening and showed that they could be a highly difficult out in January.