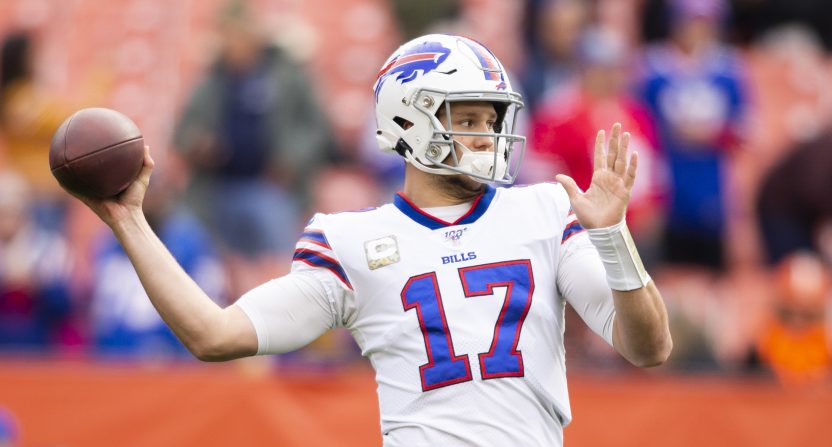 Thanksgiving is just around the corner and the home stretch for the 2019 NFL regular season is essentially here. There’d be a few surprise playoff teams if the season ended today, but that’s likely to change between now and the end of December.

Here’s a look at six teams that are currently positioned as contenders but are actually pretenders.

They hold the top Wild Card spot in the AFC at 6-3, but the Bills are the eighth-lowest-scoring team in the NFL. Quarterback Josh Allen can’t consistently stretch the field, and that one-dimensional dynamic will eventually become problematic. It hasn’t yet because the Bills have played one of the easiest schedules in the league, and because they’re in a comically bad division in the weaker of the two conferences, but Buffalo’s just 3-3 since Week 4 and in a couple weeks they’ll play Dallas, Baltimore, Pittsburgh, and New England consecutively. That could spell trouble for a team that rides its defense but doesn’t get enough big plays on that side of the ball. The Bills have just four takeaways in their last six games.

They’re currently tied for the last playoff spot in the AFC at 5-4, but the Raiders have actually been outscored by 32 points this season. That’s a worse scoring margin than the 4-6 Chargers, the 3-6 Broncos, the 3-5-1 Lions, and the 3-6 Buccaneers. The good news is the schedule remains pretty easy going forward, but the Raiders don’t have much talent on defense and could have trouble sustaining this if rookie Josh Jacobs hits a wall. Considering his limited workload in college, that’s a very real possibility.

They’ll still win the ugly AFC West, but this just isn’t Kansas City’s year. Too many injuries on both sides of the ball, and the defense remains a glaring vulnerability. Remember: They lost back-to-back games even before Patrick Mahomes went down with his recent knee injury. And while Mahomes looks stronger now, the Chiefs face a tremendous uphill battle to catch up with fellow AFC division leaders New England, Baltimore and Houston. Don’t be surprised if they’re a one-and-done playoff team.

Dallas simply can’t beat good teams. They’ve yet to win a game this season against a team that had a winning record when they played them, and those losses to New Orleans, Green Bay, and Minnesota could have a hugely negative impact on tiebreakers come December. They did beat the Eagles in Dallas, but they might have to do so again in Philadelphia in Week 16 in order to defend their NFC East crown. Philly’s getting healthier, so I’m not sure I see that happening. And if it doesn’t, the Cowboys are likely to miss the playoffs entirely.

Todd Gurley is a shell of his former self, the offensive line is in shambles, and Jared Goff has been one of the five worst starting quarterbacks in the NFL. What’s more, they appear to be regressing on that side of the ball. The Rams have remained alive at 5-4 by loading up against bad teams like Cleveland, Atlanta, and Cincinnati, but they scored a grand total of 19 points in their two most recent losses to San Francisco and Pittsburgh. The defense remains good, but that unit has also lost some key members and isn’t strong enough to carry the mistake-prone Goff and an offense that has completely lost its edge.

Kyle Allen has come back to earth at quarterback for a Panthers team that is far too reliant on a running back in this day and age. Christian McCaffrey deserves offensive player of the year consideration, but backs don’t carry teams in 2019 and Carolina’s defense has suffered far too many lapses to be considered an elite unit. The Panthers have also generally loaded up on an easy schedule, but they’ll have to face the Saints twice as well as the Colts and Seahawks down the stretch. They’re already on the outside looking in at 5-4, but they could easily finish with a losing record.