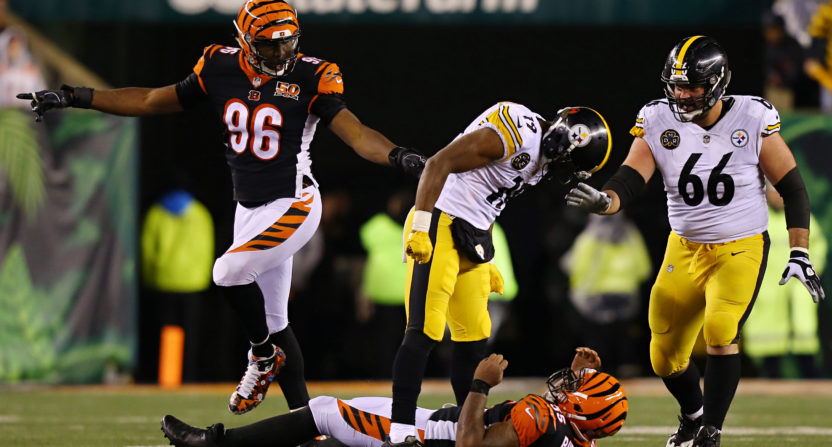 The Steelers-Bengals Monday Night Football game was sickening. Or at least it was sickening to me and a portion of fans. But despite all the dirty play and injuries that took place in Cincinnati, this game likely wasn’t seen as bad to the average NFL fan.

For one person who may have been disgusted at the hits to the head and late hits that caused multiple injuries, another loved the throwback style of football that was a part of the game before anyone knew about CTE. Back at a time where “men were men” and they didn’t wuss up the game.

I would have thought that after seeing Ryan Shazier’s down on the ground not being able to move his legs, that the other players would think twice about leading with the helmet to make a tackle or dishing out late hits, but everyone seemed to forget about that once the whistle blew to resume play. Thankfully, while he’s not out of the woods yet, all signs seem like Shazier is going to be alright and that might have been the only positive thing to take from this game.

The rest of the game was filled with two teams who acted like they were more concerned with killing each other than winning the game. Everyone knows football is inherently dangerous and especially so when two AFC North teams play. But there’s a difference between a hard hit and dirty play and what the Bengals and Steelers did was dirty.

Look at the Juju Smith-Schuster hit on Vontaze Burfict and the George Iloka hit on Antonio Brown. Two plays that occurred a couple minutes apart from each other, where one may be considered a dirty but legal play while the other was dirty and illegal, were plays that encapsulated how this game was played.

To most NFL fans, dirty play and hard hits are a sign that the NFL is back. Let’s stop the charade, the average NFL fan doesn’t really care about a player when they get a concussion. All they care is how soon the player can get back to playing for favorite team and/or fantasy reasons and will eventually be sad if that player commits suicide in their 50’s due to being tortured with CTE for so many years.

And to anyone who takes offense to that stereotype of the average NFL fan, answer why games featuring AFC North teams are scheduled in primetime. The AFC North is one of the worst divisions in football both in win-loss record and in quality of play. Maybe a reason these games are in primetime is because of the Steelers and their fanbase, but the Steelers always has a Browns, Bengals and Ravens game on primetime every year and it’s not because of the quality of play.

Let’s face it, our society is just as bloodthirsty as the Ancient Romans were centuries ago when they went to the Colosseum to see people get ripped apart by lions. It’s like people who go to NASCAR races for the crashes. To the diehard fans of both sports, they can appreciate the nuances of the sport and love it without the big hits but to the average or casual fan, seeing someone get their helmet ripped off or seeing a player get hit so hard they fall to the ground like a rag doll is the icing on the cake.

And to the NFL, they have to deal with figuring out how to discipline Smith-Schuster and Iloka, but it has caused most people to pretty much forget about the national anthem, at least for a day or so. Hell, it even got most people to forget about Rob Gronkowski’s late hit and his one-game suspension and that happened the day before.

Football is never going to be 100% safe and it’s unrealistic to expect it to be. People are going to get injured and sometimes be seriously injured. But at the same time, how we react to these unnecessary, late and dirty hits is what’s going to determine how the NFL handles this issue, if they even can. While people were vocal on social media about how dirty the game was and how they were appalled, it wasn’t the voice of the average NFL fan because the average NFL fan really wants more of that whether they care to admit it or not. Because at the end of the day, we’re just bloodthirsty animals like our ancestors were.