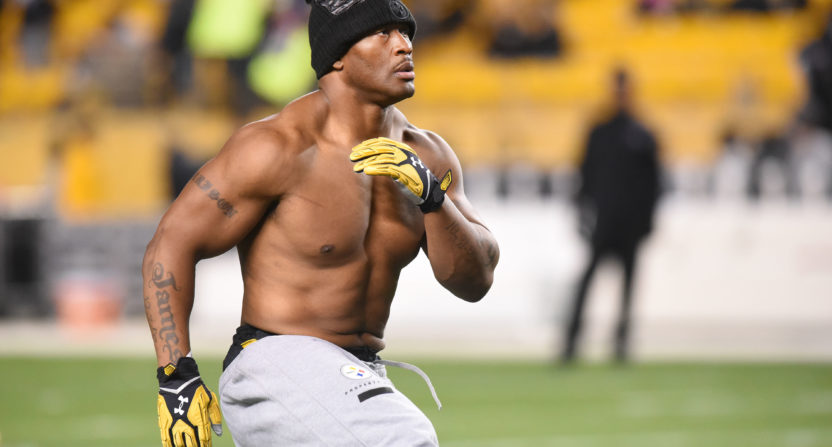 Last week, the Pittsburgh Steelers surprised the football world by releasing franchise sack leader James Harrison with two games to play. Harrison wasn’t unemployed for long, however, as the Patriots quickly scooped him up, perhaps looking ahead to a potential matchup with Pittsburgh in the AFC Championship Game.

Since then, Harrison has explained that he never received the playing time he was promised in Pittsburgh and spend much of the season asking for his release. And while Steelers fans may be sad to see a franchise hero depart, Harrison’s former teammates don’t seem sad too see the linebacker go. On Wednesday, several Pittsburgh players spoke ill of Harrison, accusing him of missing meetings and failing to mentor young players.

“If you didn’t want to be here, come out and say it,” Pouncey said. “Don’t make it look like it’s the team’s fault. … You think the team and the organization wanted to get rid of James Harrison? Come on, now. If I wanted out, I wouldn’t let the team take the blame for it.”

Cornerback Artie Burns said Harrison’s “energy” showed the team he was upset over a lack of playing time, which created “a whole thing with him and the guys upstairs,” leading to his release on Saturday.

“I guess [New England is] where he wanted to be,” Burns said.

But no one had more to say about Harrison’s departure than fellow linebacker Bud Dupree. Per the Pittsburgh Post-Gazette, Dupree said Harrison “cut his self” and suggested he couldn’t give away Steelers secrets because he doesn’t actually know the plays.

“It’s no one’s fault on our team, why he got cut. He cut his self. He came in, he didn’t want to do anything that made us better.”

“People going on in on coach Tomlin, saying the Steelers are stupid for cutting James Harrison, the Steelers are dumb, [Harrison’s] gonna tell the whole — if he tells the whole playbook, that’s his fault. I didn’t see him in meetings, so I don’t know if he knows the plays or not.”

“It feels like he went to the Patriots just to spit in Coach Tomlin and Mr. Rooney’s face. That’s all it was to us,” Dupree said. “Like basically you spit on your teammates, you spit on us because the whole season you’ve been shown as someone different than what you were supposed to, so-called, be to us — other than a leader.”

“He made it clear to us early [that he didn’t want to be here]. We try to look at Deebo as a mentor, as the O.G. of the team. We all tried to give him a chance just to be the leader and be the person that, before we got here, the Steelers portrayed him to be. Just coming in to it, you see James Harrison and because he’s this great player you try to follow his footsteps.

“But when someone really doesn’t want to share wisdom with you or share knowledge with you because they feel like you’re gonna take their shine or take their limelight, that’s how we feel. We tried to hold back as much as we could because we didn’t wanna jeopardize making him look bad. We still respect him as a person. As a person we still love Deebo. And we feel like he could’ve been the leader that they wanted him to be, and I feel like he could’ve been the person that we wanted him to be.”

Whew, tell us how you really feel, Bud.

Without having been in the Steelers locker room the last three months, it’s impossible to know for sure whether Harrison was the sourpuss Dupree and company are portraying him to be, but it sure sounds as if he rubbed some people the wrong way at the end of his Pittsburgh stay.