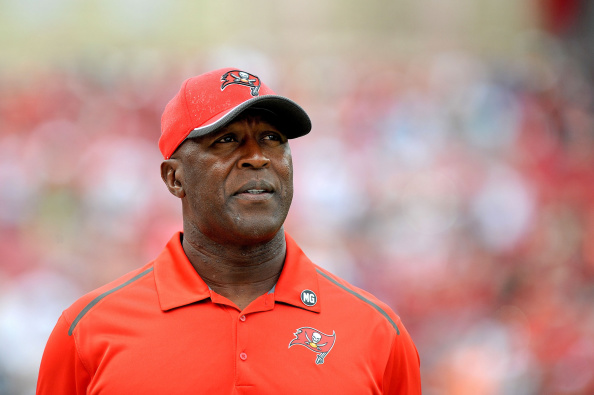 The Tampa Bay Buccaneers announced on Wednesday night that they have fired head coach Lovie Smith:

“After careful consideration, we informed Lovie that we have decided to make a change. I want to thank Lovie for his hard work and dedication to the Buccaneers during his time here. This decision was difficult on a variety of levels. I am disappointed that we were not more successful these past few seasons, but we are committed to doing what is necessary to give our fans the winning team they deserve. As we move forward, General Manager Jason Licht will oversee the process for finding our next head coach.”

This is certainly the most surprising firing in the NFL since the regular season ended on Sunday.

After coaching the Chicago Bears for nine seasons (81-63 record, 3 NFC North titles, 1 NFC Championship), Smith coached just two seasons in Tampa Bay. While the Bucs had an NFL-worst two wins in 2014, they jumped up to six wins in 2015.

Bucs firing of Lovie Smith definitely comes as a surprise considering the team overachieved & was never a contender entering the year. Odd.

We’re left with a scenario that we’re seeing far too much of in the NFL.

Simple, poignant text from Bucs source on the firing of Lovie Smith: “8-24.” …In case you were wondering, that’s his record in 2 seasons. — Jeff Darlington (@JeffDarlington) January 7, 2016

Smith is viewed as the ultimate player’s coach, and you’d think that with a roster featuring youth as such a key element — like at quarterback with Jameis Winston –, he’s the kind of coach Tampa Bay would’ve given at least another or year two to work with these players.

Can’t imagine players are happy about losing Lovie. Will be tough for new coach to win over locker room. Was basically impossible in Chicago — Adam Hoge (@AdamHoge) January 7, 2016

Now, there is no doubting Smith’s faults: his Tampa-2 defense is what it is and teams have figured out how to exploit it these days, he’s very stubborn when it comes to offensive football in today’s NFL (went through 4 offensive coordinators in Chicago for example), etc. But these are things everyone knew when Tampa Bay hired him.

Bucs linebacker Lavonte David is definitely not a fan of the move (he soon deleted this tweet and others on the topic): 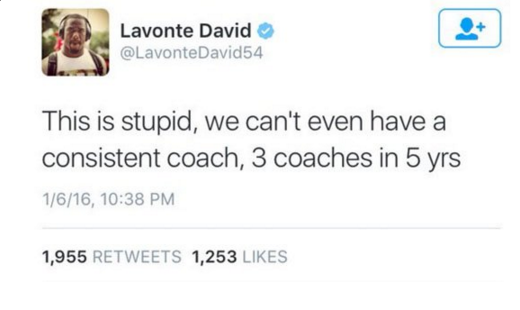 McCoy had a lot more to say about the firing to ESPN’s Josina Anderson:

“I don’t know what to think right now. I am at a lost for words. I was just out driving, out getting some gas, and my phone started blowing up. It’s 10 o’clock at night. I don’t now what is going on. I’ve always loved Lovie. He’s always been great to me and my family. I’ve never had a bad thing to say about him. I’m just at a loss for words. I honestly feel bad for my coach. This is unexpected. I never expected this.
I honestly have no idea what’s going on, or why it’s happening. Next year will be my 7th year and now my 4th coach. I was liking what was going on. Coach has always been great to me even before he was my coach. He was the coach of one of my mentors Tommie Harris. I had an opportunity to meet him and he has always been a great guy. As a coach, I don’t see a better guy to play for.”

And this is where things get even more interesting. Former Tampa Bay general manager and current ESPN analyst Mark Dominik tweeted that he expects Bucs offensive coordinator Dirk Koetter to be promoted to the head coaching position within the week:

With Lovie Smith fired I would expect Dirk Koetter to be named head coach within the week. They still will interview a few other candidates.

But then there’s this (and perhaps it’s just Koetter acting surprised):

Told Dirk Koetter was surprised as everyone by this. More to come. — Peter Schrager (@PSchrags) January 7, 2016

It will be interesting to see how the Bucs’ coaching search unfolds, as well as what’s next for Lovie Smith.