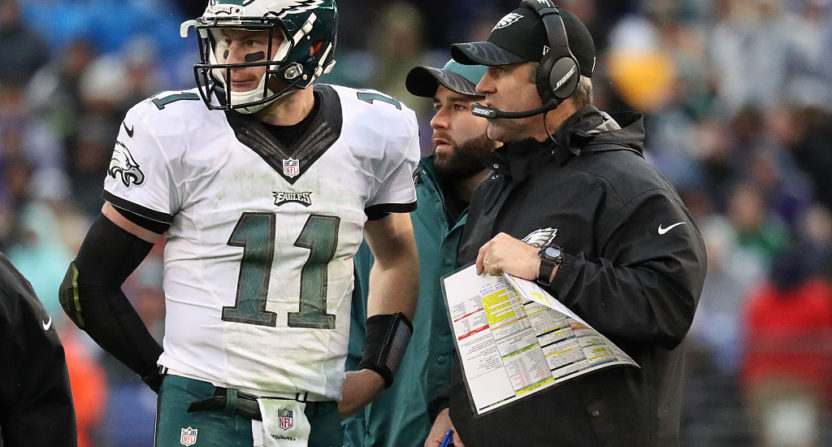 When the Philadelphia Eagles brought an end to the Chip Kelly experiment after three seasons, the franchise decided it was in the best interest to go back to a more familiar approach that had seen more sustained success under former head coach Andy Reid. That led to the hiring of former Eagles quarterback and Kansas City Chiefs offensive coordinator Doug Pederson.

The hire was not one that sat well with Eagles fans, and it is understandable why that would not have been seen as the best possible coaching hire. The fans had just seen the Eagles attempt to move in a different direction after it had become crystal clear Reid’s methods were no longer being effective after a lengthy career on the Eagles sideline. And now they were going to go back to that old familiar style of play because the Kelly hire crashed and burned?

To Eagles fans, it felt as though the front office was going through Stockholm Syndrome. And Pederson wasn’t exactly the kind of personality that seemed to mesh well with Eagles fans who had seen him in town once before as a player and witnessed him fly under Reid’s wing on the sidelines as an assistant. The fact that Reid gave his offensive coordinator in Kansas City his endorsement to the Eagles front office also was tough to take for Eagles fans who had also just seen the Chiefs boggle their offensive opportunities in the final minutes of a playoff loss.

“Here we go again,” Eagles fans feared. As it turned out, however, the Eagles may have made a pretty solid hire as Pederson continues to evolve as a head coach and has the Eagles owning the best record in the NFL as they come off a bye week in which they actually expanded their lead in the division without playing a down. One look at the current progress of all the coaches hired two years ago will show just how Pederson compares to others around the league, and he’s looking pretty good.

Pederson is tied for the best record among coaches hired in 2016 with Tennessee’s Mike Mularkey and has one more win overall than one of the hottest names in the coaching carousel after the 2015 season, Miami’s Adam Gase. What do Pederson and Mularkey have in common with their apparent success? The answer is obvious; they each have some of the best quarterbacks in the game to rely on.

Mularkey took over an offense with Marcus Mariota, the quarterback the Titans have invested to build around for obvious reasons. In Philadelphia, Pederson is helping to guide second-year quarterback Carson Wentz to playing at an MVP level. Mularkey had already worked with Mariota as Tennessee’s offensive coordinator before becoming the head coach, and Pederson and Wentz got started together after a late pre-season trade with Minnesota shipped Sam Bradford to the Vikings and gave Wentz an opportunity to start right away. They went through their growing pains together and now have one of the best records in the NFL in mid-November.

As you move down that list of coaches hired in 2016, the quality of quarterback play takes a clear dip, starting in Miami. In Gase’s first season, the Dolphins went 10-6 and reached the postseason with Ryan Tannenhill at quarterback. But with Tannenhill injured, the Dolphins made some moves to bring in Jay Cutler out of retirement this season and now the Dolphins are 4-5 after three-straight losses including a 40-0 shutout against Baltimore and Monday night’s 45-21 thrashing in Carolina. But at least Gase is still ahead of the coach with the worst downward trend on this list, Ben McAdoo.

McAdoo coached the New York Giants to a 11-5 record in his debut season, losing in the Wild Card round of the NFC Playoffs. McAdoo benefitted in his rookie head coaching season by having a 4,000-yard season with 26 touchdowns from Eli Manning and a relatively healthy roster to work with. This season has been anything but as the Giants have limped their way to a 1-8 season that is now marred by becoming the first team to lose to the San Francisco 49ers this season. There may be no coming back from that in the end as the hot seat talk surrounding the Giants is boiling.

On the other side of the abyss… Eli Manning pic.twitter.com/UamEK3Lsgq

Dirk Koetter at Tampa Bay has not been much better overall, but at least he has been consistently mediocre at best, I guess? What has been frustrating to watch is how Koetter and the Bucs have not been able to get more out of Jameis Winston, who continues to be quite a character that could use a good veteran presence to bring him down a notch at times. This is especially concerning when you compare what Mularkey has been able to do with Mariota in Tennessee. Mariota and Winston are two different quarterbacks, of course, but the results are speaking for themselves right now.

But if there is any doubt that a coach’s fate can be tied to the quality of play at quarterback, take a look at the bottom of that list compiled by Jimmy Kempski of Philly Voice. Chip Kelly was fired after one dismal season, even by 49ers standards. Kelly was unable to get things going with Colin Kaepernick before (and after) the national anthem demonstrations took center stage) and had to resort to trying to win with Blaine Gabbert. Kelly had proven to be a passing trend in the NFL before his arrival in San Francisco, but yikes. The 49ers just acquired Jimmy Garoppolo from the New England Patriots to give new head coach Kyle Shanahan, but it remains to be seen whether or not Garoppolo will be the answer the way some have predicted previously.

And then, of course, you have the Cleveland Browns. The history of quarterbacks in Cleveland is well-documented at this point, but it only strengthens the idea of how important it is to get your quarterback selection correct. Hue Jackson has had to work with Cody Kessler, Josh McCown, Robert Griffin, Kevin Hogan, Charlie Whitehurst, and now DeShone Kizer. Nothing ever works at quarterback for the Browns, which one of many reasons why so many probably felt bad for Hue Jackson when he became the head coach of the Browns.

In the NFL, coaches will not be given time to grow a team the way they might in the college level, but it is on the front office to make sure the right pieces are in place to allow those coaches to succeed. In Philadelphia and Tennessee, the quarterbacks are in place and the rosters around them have come together. In New York, the time to prepare to turn the page is approaching quickly. And in Cleveland, it’s once again back to the drawing board in the scouting department with a likely top pick in the 2018 NFL Draft.