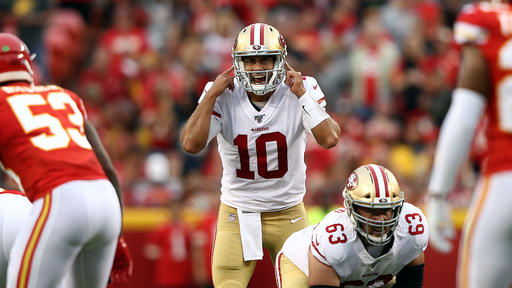 If you’re a fan of either the Tennessee Titans or Green Bay Packers, then Conference Championship weekend undoubtedly left a sour taste in your mouth. However, if you’re a fan of high-quality football, it could not have gone better.

With the San Francisco 49ers and Kansas City Chiefs advancing to Super Bowl 54 (Feb. 2nd, 6:30 PM ET) at Hard Rock Stadium in Miami, this year’s game is set to be a nail-biter. The teams are basically seen as equals by oddsmakers. The early Super Bowl odds show that the point spread is either Kansas City -1 or -1.5, depending on the sportsbook and, according to Sascha Paruk, the site’s lead oddsmaker, the spread is unlikely to move significantly over the next week.

Both Teams Are Balanced

The narrative heading into Super Bowl 54 is that the game will feature the league’s most tenacious defense (San Francisco) trying to corral the NFL’s most-explosive offense (KC).

But these teams are not one-dimensional. They wouldn’t be here if they were. They were arguably the two most-complete teams in the NFL – outside of the Baltimore Ravens, anyway – during the regular season.

The San Francisco offense ranked second in the league in scoring at 29.9 points per game and is averaging 32 PPG in the playoffs. (The Chiefs offense was fifth in the league at 28.2 PPG, albeit with Patrick Mahomes out or less than 100% for a big chunk of the season.)

On the other side, the KC defense – the most-maligned unit in this game – was seventh in the league in the regular season at 19.3 PPG, which was actually 0.1 better than the Niners. While KC surrendered 31 points to the Texans in the Divisional Round, a blocked punt and a fumble inside the ten-yard line led directly to 14 of those points.

While hunting down the Patriots for the all-important #2 seed in the AFC at the end of the regular season, the Chiefs allowed just 11.5 PPG in the final six games. This unit turned the proverbial corner in the back-half of the year and will look to carry that momentum into Super Sunday.

Of course, discussing the 49er offense and Chief defense off the top is burying the lede.

The battle between Patrick Mahomes and KC’s electric playmakers against Joey Bosa and the relentless San Francisco D will be a true heavyweight tilt.

Since falling behind Houston 21-0 in the first quarter of their Divisional Round game, Mahomes and company have outscored their opposition 86-34 in their last seven quarters of action.

Mahomes, the 2018 MVP, is playing even better than when the was adjudged the best player in the league. He’s passed for 615 yards, eight TDs, and no picks in the postseason, completing 66% of his passes. His passer rating is an almost-off-the-charts 131.5. Any concerns about his mobility stemming from a midseason knee dislocation were quieted, once and for all, with this 27-yard TD run.

To put that in perspective, the best passer rating in the regular season belonged to the Titans’ Ryan Tannehill at 117.5, which itself was the highest mark since 2016.

But now Mahomes will face a San Francisco front that racked up 48 sacks in the regular season (3.0 sacks per game) and has added another nine in two playoff outings; he’ll face a defensive unit that’s generated 32 turnovers in 18 total games this year; he’ll face a secondary that ranks second in the NFL in defensive efficiency against the pass.

In a 27-10 win over Minnesota in the Divisional Round, San Francisco’s defense held the Viking offense to just 147 total yards. The 49ers had as many first downs as the Vikings had rushing yards (21).

While they gave up 20 points and 358 yards to the Packers the next week, most of that came in what amounted to garbage time. The Niners led 27-0 at the half and were in prevent-style cruise control for the final 30 minutes.

Will the 24-year-old phenom Mahomes produce one more thrilling playoff victory, delivering Kansas City its first title since Super Bowl IV, or will the old adage that “defense wins championships” earn the Niners their sixth Lombardi Trophy? Tune into FOX next Sunday to find out.