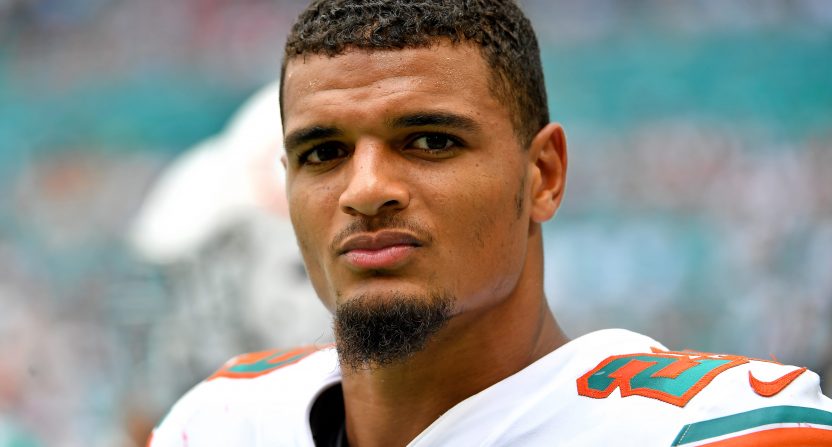 The Miami Dolphins are a full-on dumpster fire in 2019, with a -92 point differential through just two games. It’s been quite clear they’re tanking, and some veteran players decided they’d had enough after the team was humiliated with a 59-10 loss at home to the Baltimore Ravens in Week 1. Multiple veteran players reportedly requested trades after the loss.

And on Sunday, the team was again destroyed at home in a 43-0 loss to the New England Patriots. This time, the Dolphins followed the loss by trading one of their best players a day later.

Miami has traded defensive back Minkah Fitzpatrick to the Pittsburgh Steelers as part of a package that will send a first-round pick back to Miami.

Fitzpatrick, 22, was the 11th overall pick by the Dolphins out of Alabama in the 2018 draft. He’s a highly-skilled and versatile defensive back capable of playing both cornerback — inside and outside — and safety. These kind of players are getting more and more valuable in today’s NFL.

However, it’s also a weird move in the Steelers’ position, considering that, you know- their starting quarterback was ruled out for the season earlier in the day and the team is 0-2.

The #Steelers announce that QB Ben Roethlisberger had an MRI on his right elbow and will need surgery this week. He is out for the season.

This trade also suggests the Steelers are very high on Mason Rudolph, the new starting quarterback who was a third-round pick out of Oklahoma State in 2018. If not, it doesn’t make a whole lot of sense to trade away what could very well be a top-10 pick in 2020 considering their 0-2 record and no Roethlisberger. For example, Five Thirty Eight has the Steelers winning just five games. Big Ben will be 38 next March, and the search for the team’s next franchise quarterback should be a priority. But clearly they feel strongly about Rudolph’s chances to be that guy.

As for the Dolphins, they’re making an absolutely brutal team even worse.

But the Dolphins are all-in with this rebuild and aren’t trying to fool anyone with it. They’re now *loaded* with cap space and draft picks going forward. The draft picks include their own first-rounder in 2020 (quite likely No. 1 overall), the Steelers’ first-rounder in 2020 (again, this could be a high pick too), and the Houston Texans’ pick in 2020. Additionally, they have multiple picks each round the rest of the draft, and two first and second-round picks in 2021.

2020 draft picks the Dolphins own:

If you’re going to rebuild, it’s better to fully embrace it and go all-in than go halfway (unless there’s a talented quarterback in-house or other reasons to believe you can rebuild on the fly). The Dolphins are certainly embracing it, even though it will result in a highly embarrassing 2019 season. It should pay off in the long run.