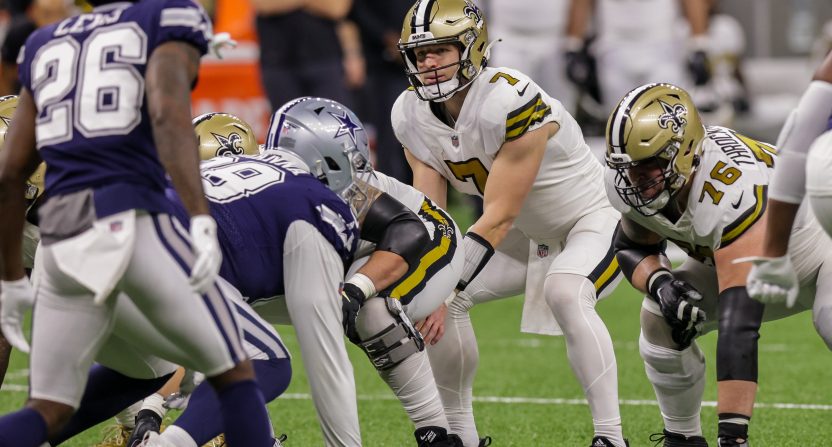 Taysom Hill finally got the start at quarterback for the New Orleans Saints, just a week after signing an eye-opening contract extension. And it didn’t go well.

Hill threw four interceptions in a 27-17 home loss to the Dallas Cowboys on Thursday Night Football, and the final two interceptions were particularly rough.

With just under five minutes remaining in the fourth quarter, Hill rolled out and tried to complete a pass downfield, but he badly underthrew the ball and made it an easy play for Defensive Player of the Year candidate Trevon Diggs. It’s already interception No. 9 on the season for Diggs, and he’d have even more if the opportunities were regularly this easy.

Not a good pass from Taysom Hill, for his third interception thrown in the game. He has a 36.9 passer rating in this game.

And it's the ninth interception on the season for Trevon Diggs! pic.twitter.com/8HAChQkq1D

Just two minutes later, Hill had an even more embarrassing interception. This one was a pick-six thrown right into the hands of 305-pound defensive tackle Carlos Watkins.

This Deonte Harris incredible effort for a 70-yard touchdown gets Taysom Hill's passer rating all the way up to 44.2! pic.twitter.com/WxXHD3zV2h

Taysom Hill with the hurdle on a 23-yard run! pic.twitter.com/PfULdORyzP

But to play the quarterback position effectively, Hill needs to be much, much better as a passer- or else he may be no more than a poor man’s Jalen Hurts. What Hill showed as a passer on Thursday night isn’t exactly a shock to many NFL evaluators, despite how much Sean Payton and the New Orleans organization believe in him.

Taysom Hill is one heck of a running back

We might have to stop calling Sean Payton a great offensive mind if he continues to try and convince us that Taysom Hill is a starting NFL quarterback.

🔹 The Bad: First player in the NGS era to finish with negative passing yards under pressure in a game, minimum 10 such attempts (1/10, -2 yards, INT)#DALvsNO | #Saints pic.twitter.com/CSfMLksAbo

Taysom Hill is the first quarterback in NFL history to rush for 100+ yards and throw 4+ interceptions. pic.twitter.com/mRNeogPINR

And Hill is 31 years old, so it’s not like we’re talking about a young quarterback here.

His dual-threat (or at least running threat) ability may make him more valuable than at least the Trevor Siemians of the world, but that’s a very low bar.

The 5-7 Saints are a long way from returning to contention without significant improvements at the position in a quarterback’s league.