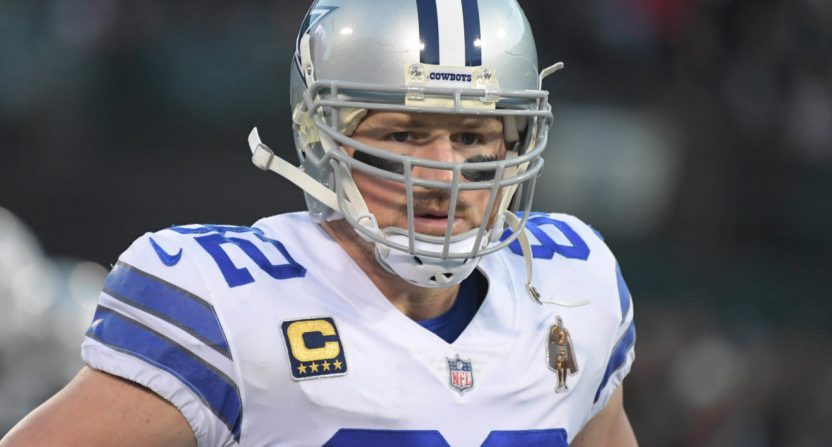 Last year, it was quarterback Tony Romo who decided to retire instead of playing as Dak Prescott’s backup in Dallas or trying to latch on somewhere else. He walked right into the top CBS Sports NFL booth alongside Jim Nantz in one of the most high-profile rookie seasons in televised sports history. It was a home run hire for CBS as Romo’s work drew rave reviews throughout the season and he looks to be a mainstay for years to come.

ESPN is looking to have the same impact with their own hire this season. Jason Witten chose to retire from the Cowboys instead of playing another season to join Joe Tessitore in the completely revamped Monday Night Football booth. Witten’s move to ESPN comes on the heels of Jon Gruden finally going back to coaching and Sean McDonough returning to call college football. It probably helped Witten’s decision that he’ll be paid more than $4 million by ESPN to call games for the network.

Witten and Romo’s hires the past two offseasons reveal a couple truths about the NFL and the NFL media. First, there’s no better pathway to big-time gigs in sports media than starring for the Dallas Cowboys. Three of the four major networks will see their top broadcast booths filled with former Cowboys — Romo at CBS, Witten at ESPN, Troy Aikman at Fox — so for those of you that may have grown tired of “America’s Team” over the years, you have our sympathies.

Second, and most importantly from a big picture perspective, television is now competing with playing in the league as viable career options for veteran players.

It used to be that players wouldn’t even consider television until it was definitive that their careers were over. Now we’re seeing players weigh stepping into analyst roles while also considering continuing their playing days. And it’s not just been Witten and Romo either. Last year, Jay Cutler was all lined up to take on a major role at Fox in their analyst lineup before he decided to eventually play for the Miami Dolphins and forego his broadcasting career.

As he was deciding whether or not to play on, future Hall of Fame tackle Joe Thomas served as an offseason analyst for ESPN. Even though he hasn’t officially signed on with any network yet, Thomas did decide to call it a career and it looks like a certainty that he will land somewhere with a significant opportunity in the media for the upcoming season.

Carolina Panthers TE Greg Olsen auditioned for the Monday Night Football gig that ultimately went to Witten and even worked for Fox while injured last year. But he has decided to keep playing with the Panthers, signing a two-year contract extension. At just 33, Olsen struggled with injury last year but was coming off three consecutive 1,000 yard seasons before that.

Every single one of these players could walk into an NFL locker room and get a job tomorrow. Even Romo at age 38 would probably have a team come calling if their starter went down and they were in a desperate situation.

So how did we get to this point where players are willingly deciding to walk away from the game for television, even when they might even still be in the late prime of their careers?

These elite players are shortening their careers because of a squeeze on both sides. First, from the television side, the networks have seen the success of hiring players straight out of the locker room. There’s no doubt that Romo made CBS’s broadcasts better last year because of his ability to read and predict plays on the spot. His contemporary knowledge of NFL offenses, schemes, and plays brought a new kind of knowledge to the viewer at home. And it’s a kind of knowledge that someone like Phil Simms or other analysts who are well beyond their playing days simply can’t bring.

It’s not necessarily a knock on analysts who have been out of the game for 10-15 years, it’s just the reality that they’re not going to be as plugged in as someone who is just out of the league.

If Witten is able to do the same thing at ESPN, then it will undoubtedly improve the Monday Night Football broadcasts. And if going younger in the broadcast booth is working for those networks, you can bet Fox and NBC won’t be too far behind in making lucrative offers to players to try to get them in their booths and studios as well.

From the playing side, television is a great option for players who may not want to take the physical pounding any more and still be well compensated. When you can get paid millions of dollars to sit and talk about football it makes the grind of training camp, offseasons, practices, and injuries sound much less appealing. Player safety is becoming an increasing emphasis at all levels of football and the league’s concussion crisis has sparked a newfound understanding of the risks involved. Players of all ages have decided to step away early so that they can ensure a healthier lifestyle for the rest of their lives.

There are a limited number of television jobs for sure. Not every player is going to be able to step in to a primetime spot right away. But moving forward, don’t be surprised if more top-level players look at making the transition to television earlier and earlier in their careers as they weigh whether or not it’s worth it to play on.