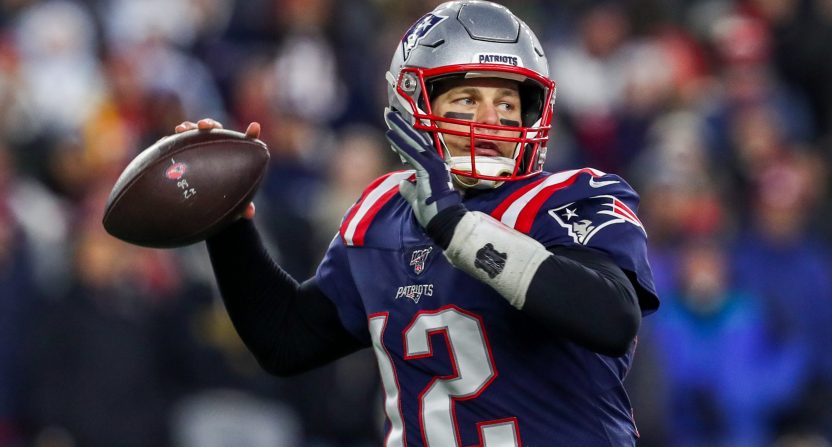 We’re just a few weeks removed from 2020. But before we close out a wild decade in America’s most popular sports league, we’re looking back at some of the best of the 2010s in the NFL.

Here’s a breakdown of the 10 best professional football quarterbacks from the last 10 seasons.

You could make an argument for 2018 MVP Patrick Mahomes here, but he hasn’t even been an NFL starter two full seasons. Only six quarterbacks this decade made more Pro Bowls than Luck, despite the fact he wasn’t in the league in 2010, 2011, or 2019, and despite the fact his 2015 and 2017 campaigns were ruined by injury. We’ll always wonder what could have been with him.

His cumulative and rate-based numbers aren’t exceptional, and he accomplished most of his notable team feats in the 2000s. But Big Ben went to five Pro Bowls this decade, and he threw 15 touchdown passes in 11 playoff games. He’s also a gunslinger whose 7.7 yards-per-attempt average puts him in company with Drew Brees, Russell Wilson, and Aaron Rodgers.

Newton’s passing numbers are not pretty, but he still spent much of this decade consistently presenting matchup nightmares to opposing defensive coordinators. He won MVP and went to the Super Bowl in 2015, and we can’t overlook his impact as a runner. Newton has 58 rushing touchdowns, which is a mark only four running backs have hit this decade.

Only Brees has more passing yards this decade than Ryan, who made four Pro Bowls and was league MVP in 2016. He’s been so damn consistently productive that we had to include him on here somewhere.

Only three quarterbacks have more Pro Bowl nods this decade than Rivers (six), who hasn’t missed a start since 2005. He lacks big-time accolades, but his numbers are undeniable. Only Brees and Ryan have more passing yards since 2010.

Among quarterbacks who have started at least 40 games, only Rodgers and Brees have higher passer ratings this decade than Wilson, who has helped get Seattle to a pair of Super Bowls. He’s one of the most clutch passers and one of the best improvisers in league history, and you have to include the fact he’s rushed for 19 touchdowns and nearly 4,000 yards.

The most accurate and prolific passer of the decade technically won his only Super Bowl (for which he received MVP) just a few weeks into this decade, although that was the end of the 2009 season. Regardless, only Tom Brady has more Pro Bowl nods than his eight since 2010 and the numbers are off the charts.

Manning was a starting quarterback for only about half of the decade, but he was still MVP in 2013 and went to a pair of Super Bowls as one of the most consistently dominant quarterbacks between 2010 and 2015. He was a first-team All-Pro twice and a Pro Bowler four times in those five campaigns.

Among 47 quarterbacks with 1,000 pass attempts this decade, only Patrick Mahomes has a higher passer rating than Rodgers, who was MVP in 2011 and 2014 and was Super Bowl MVP in 2010. His decade is a little front-heavy, as he’s been a lot less effective in recent campaigns, but he was clearly the best quarterback in the game for several full seasons.