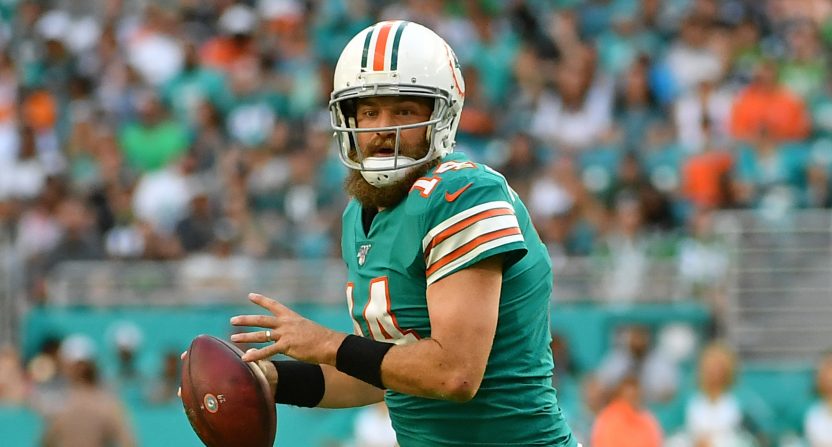 We’re just two weeks away from 2020. But before we close out a wild decade in America’s most popular sports league, we’re looking back at some of the best (and worst) of the 2010s in the NFL.

Here’s a breakdown of the 10 worst professional football teams from the last 10 seasons.

It’s complicated. 13 teams since 2010 have won fewer games than Miami, but we all know this one of the worst 53-man rosters of the modern era. And while these Dolphins deserve plenty of credit for somehow winning three games, they’re still being outscored by 13.9 points per game. That would be the worst full-season mark this decade. They’re bad in pretty much every measure.

The 2-14 Titans were able to draft Marcus Mariota second overall because they were outscored 11.5 points per game in an abysmal 2014 campaign. Their only wins came by a combined eight points, and they ranked in the top four in football both offensively and defensively.

Without Peyton Manning, the feces hit the fan for a Colts team that won just two games while being outscored by 11.7 points per game. They also had a slightly worse turnover margin (minus-12) than the 2014 Titans.

Only two teams this decade have won fewer than two games in a season: the 2016 Browns and the 2017 Browns. This 1-15 team actually had a worse scoring margin than the winless 2017 edition, but they fared much better in the turnover department (minus-12 versus minus-28), and they at least beat the San Diego Chargers in their penultimate game.

Their minus-28 turnover margin is the worst of the decade by a wide margin — nobody else is below minus-24. And there’s no way we could have a winless team any lower. But the reality is this Browns team wasn’t close to as bad as their record. Six of their 16 losses came by six or fewer points, and four came by exactly a field goal.

These Texans won their first two games by nine total points, and then they never won again. They’re one of just three teams this decade to be outscored by 150-plus points with a minus-20 or worse turnover margin and fewer than three wins. The offense was comically bad all year, and the defense registered just 11 takeaways (which is the second-lowest mark this decade).

These Panthers managed to win a pair of one-score home games, but those were scattered within a sea of blowout losses. The offense averaged an unbelievable 12.3 points per game as the Panthers lost 12 of their other 14 outings by double-digit margins. Let’s never forget Jimmy Clausen and Matt Moore.

They also managed to win two games midway through the season, but these Rams had an even worse scoring margin than the 2010 Panthers (and everyone else this decade except the No. 1 team on this list). They averaged just 12.1 points per game, which is the lowest mark this decade. Thanks for nothing, Sam Bradford.

Meet the only team this decade with a minus-200 scoring margin and a minus-20 turnover margin. The 2-14 2012 Chiefs were a bloody mess. Their two wins came by a combined nine points (one in overtime), and most of their losses were turnover-filled embarrassments. You know you’re in trouble when Brady Quinn starts half your season. At least this led to Andy Reid.