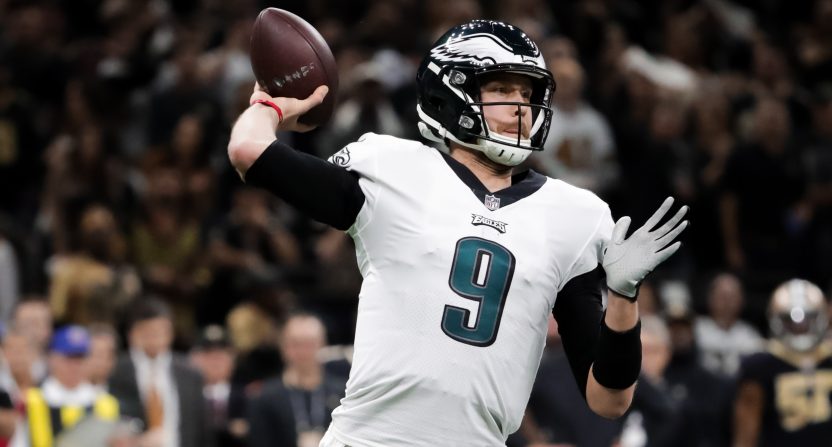 NFL free agency negotiations kick off on Monday, with unrestricted free agency officially beginning Wednesday at 4 p.m. EST. We’ve already looked at the best free agents out there regardless of position, but what if the best pending free agents were to form their own team? Here’s what the starting lineup would look like…

Colin Kaepernick is the backup simply because he’s gotta be rusty and Foles has some magic dust. The 2013 Pro Bowler and 2017 Super Bowl MVP led another surprising playoff run in Carson Wentz’s stead last season, and he is at least a middle-of-the-pack starter in his prime.

You’d think he’d be fresh after a year away, and in 2017 he was one of the best all-around running backs in the NFL. He’s still only 27, which gives him an edge over 29-year-old Mark Ingram.

Okay, this isn’t great. Who wants Baltimore’s starting receiver corps from last season? Neither is a star at this point, but this wouldn’t be the worst starting duo in the league. The former can stretch the field and the latter is quite an accomplished playmaker.

He’d probably serve as the No. 1 option anyway, and this team would also want emerging slot specialist Adam Humphries for depth. This wouldn’t be a top-heavy receiving group, but it’d be deep.

The 10-year veteran is coming off a career year in which he scored six touchdowns and cobbled together nearly 900 receiving yards in Oakland. He’d be backed up by Jesse James and Austin Seferian-Jenkins.

The mountainous 25-year-old played a key role down the stretch for the Super Bowl champion Patriots. He’s still emerging and he has to become more consistent, but Brown has a chance to become a perennial Pro Bowler.

The steady nine-year veteran is coming off a strong year for the NFC champion Rams.

The architect of this team would also want Matt Paradis from the Broncos, but Morse is only 26 (Paradis is 29) and he’s coming off a stronger season as a pass protector. You’d want both because they’ve both had issues staying healthy.

The longtime Steeler is fairly steady and worth a shot at the age of 33, but with two old guards, you’d have to add Andy Levitre for insurance.

The 2014 first-round pick hasn’t lived up to expectations but has still flashed at times, and he could still have a bright future at the age of 26. This team would want to complement Brown and James with a swing tackle, and Daryl Williams from the Panthers would make a lot of sense. He and James would probably have a hot camp battle.

Former Pro Bowlers who are no longer as effective as they used to be, but they’d still form a strong, experienced duo. They’d have to be complemented by a strong young backup. Darius Philon from the Chargers makes sense as an underrated presence.

The market was crushed by franchise tags to Dee Ford, DeMarcus Lawrence, Jadeveon Clowney and Frank Clark, but Flowers is one of the most versatile young defensive ends in the game and the 26-year-old Smith is quietly coming off an 8.5-sack season in Baltimore. He could turn into a star in a new environment. Preston Smith and Dante Fowler Jr. could rotate in as well.

Mosley is a four-time Pro Bowler coming off his fourth triple-digit-tackle season in five years. Like Mosley, Barr is a 26-year-old four-time Pro Bowler. And Wright is the steady elder statesman with Super Bowl experience. Throw in Jordan Hicks as a backup.

Kareem Jackson is too old to be relied on as a regular on this team, but he can be there to provide insurance for the talented but injury-prone Darby and/or the talented but potential one-year-wonder Desir. Both have high ceilings.

Before suffering a late-season foot injury, Callahan was one of the top inside corners in the league last season.

These two young studs would complement each other perfectly. Amos is one of the best coverage linebackers in the league, while Collins struggles in coverage but is a monster near the line of scrimmage. Both are only 25 years old, and they’d be backed up by veteran superstar Earl Thomas, who could use a lighter load at this stage. You’d probably also want to put Lamarcus Joyner and Eric Weddle on this team.

He might be sliding after a rough year, but that New England experience counts for a lot.

Also from the Pats’ 2018 Super Bowl team, Allen is a middle-of-the-pack punter who could have room to grow at age 29.