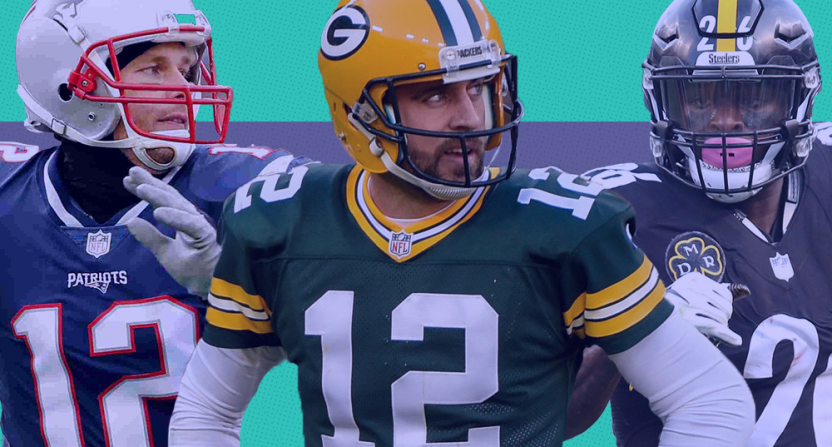 I know nobody cares about my fantasy team but please indulge me for a second. This year, I drafted what could be one of the worst fantasy teams ever. Keep in mind, I drafted this team the day before Le’Veon Bell held out from the Steelers and at the time, reports were optimistic he would show up to practice. Anyway, I drafted Le’Veon Bell, Devonta Freeman, Larry Fitzgerald, Chris Hogan, Josh Gordon, and Rex Burkhead with my first six picks. One held out the entire season, four had injuries and two of them were put on IR, and the one out of those six who arguably had the best season was released by the Browns in the middle of the season.

Before we start, Kareem Hunt (Average draft position: 11th overall) is not on this list. Hunt would be an obvious choice but what he did to get himself released and suspended was embarrassing on a human level and it would be weird to try and measure how something as terrible as that impacted our fantasy football teams.

For Le’Veon Bell, his situation was something we’ve never seen before. I hold no ill will to someone who is trying to get a better deal for himself but this kind of holdout, by someone who is one of the top players in the league, and for it to end as it did, was a real blow to every fantasy owner who had Bell before the season even started. That’s why it’s always important to draft the backup to your top draft picks in case they get a season-ending injury or in this case, they don’t want to be franchise tagged for another season.

David Johnson had a solid season for the Cardinals and it may be unfair to label him as a “disappointment,” but when compared to other running backs typically taken in the first round, Johnson’s projected performance was way off than what it actually was. Running backs drafted after Johnson included Ezekiel Elliott, Saquon Barkley, and Alvin Kamara and the three of them averaged at least six more points per game than Johnson.

Dalvin Cook may have had a rough time that was headlined by injuries in the first half of the season, but if you were able to survive without him all this time and are in the playoffs, having Cook may be a blessing in disguise. In Week 15, Cook scored his first two touchdowns of the season and rushed for over 100 yards for the first time this season.

Cook is on this list because while he’s playing his best football at the right time of the season for fantasy owners, his injury and his early season struggles likely prevented people from getting in the playoffs anyway. So for the vast majority, it’s irrelevant that he’s peaking in Week 15 if his lack of points kept them out of the playoffs in the first place.

Every year, it seems like Rob Gronkowski is the most obvious fantasy bust but someone takes him as the first tight end. Despite a history of injuries and the possibility of retirement before this season, Gronk was the first tight end to be drafted in many leagues once again. Travis Kelce (25th overall) and Zach Ertz (33rd overall) were also taken high but they are also the top two in points among tight ends. When it comes to Gronkowski, his 658 yards is good but just 3 touchdowns is what’s holding him back.

Despite a lack of touchdowns, A.J. Green was having a decent season. In the first half, Green was averaging around six receptions per game and 85 yards per game. Then Green suffered a toe injury and that completely derailed things. Green tried to come back in Week 13 but his injury wouldn’t cooperate. Green has been on the sidelines since and it really struck a blow for those looking for him to make an impact in the playoffs.

Green joins such top drafted players like Leonard Fournette (9th overall), Devonta Freeman (17th overall), and Jay Ajayi (37th overall) who had injuries sideline him for a large chunk of the season and everyone was left wondering “What might’ve been?”

Taking a quarterback early sounds like a good idea, but it’s usually a sucker’s bet. It’s very rare for a quarterback to break apart from the pack to be worth taking in early rounds, and no one expected Patrick Mahomes (113th overall) to be that quarterback this year. Rodgers is going to go over 4,000 yards but his low touchdown total (23 TD’s after 14 games) kept him from being the top QB people thought he would be.

See Rodgers, Aaron. Tom Brady was taken just below Rodgers and fared slightly worse so really, these two quarterbacks are one and the same in fantasy. Is this the season that Brady is no longer the quarterback people want on their team? Maybe. But one could argue that he should have never been in that position in the first place. That isn’t to take away from Brady’s achievements or the fact that he’s arguably the best QB in NFL history, but Super Bowl titles don’t bring people fantasy points. Next season, instead of going after Brady, wait a few rounds and get a QB who is in a pass-first offense like Matt Ryan or Ben Roethlisberger.

Larry Fitzgerald is usually Mr. Reliable, especially in PPR leagues, but his 2018 season hasn’t exactly been lights out. It’s not really Fitzgerald’s fault. For one thing, he’s 35 and is starting to slow down. Another is that Fitzgerald had to learn how to play with rookie Josh Rosen (unranked) and get those two on the same page. But despite all that, his stats were cut almost in half and while a drop off was inevitable from last season, that is a serious drop off.

Royce Freeman’s disappointing season was more on the surprising emergence of undrafted free agent Phillip Lindsay (Unranked). Once Lindsay took over the starting job, Freeman’s stock dwindled. Freeman didn’t break 100 yards in any game this season and his carries have dwindled as the season went on.

Like Dalvin Cook, Doug Baldwin’s season may have been a disappointment but he’s peaking at the right time. Having said that, among players drafted in the top 50, Doug Baldwin’s fall from grace was the steepest, ranked 60th among wide receivers. Baldwin has had injuries sideline him multiple times this season but he has largely been disappointing when on the field. Despite that, all is not lost. Baldwin had his best performance last week so if you are in your championship game and have Doug Baldwin on your team, his season may not be a lost cause.