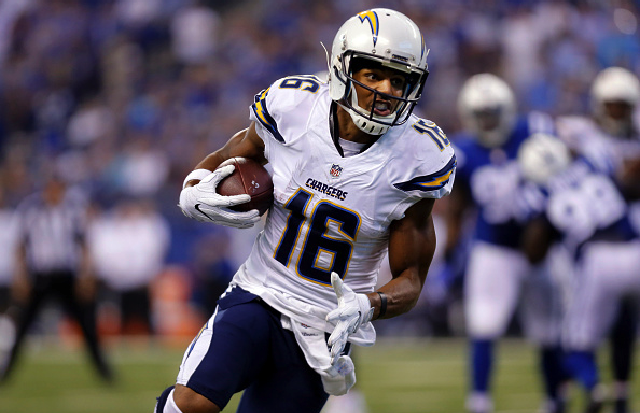 It’s been a tough year for the injury-ravaged, snakebitten San Diego Chargers, but second-year wide receiver Tyrell Williams has been a bright spot in San Diego. In 14 games, he has 59 catches for 925 yards and six touchdowns.

The Comeback caught up recently with the team’s leading receiver.

Brad Gagnon: You’re big, athletic and fast. And you’re having a huge second season. Why the hell weren’t you drafted?

Tyrell Williams: Coming from a small school [Division II Western Oregon], I still had a lot I needed to work on. I used my speed and size in order to have success in D-II, but I wasn’t really running great routes and I didn’t have the details of playing receiver down yet. I needed to get with an NFL coach and start learning that type of stuff.

BG: There was talk you’d be a sleeper pick late in the draft. Were you disappointed that didn’t happen?

TW: I definitely wanted to be drafted. I think that’s everybody’s goal — to hear your name get called. But at the end of the day, it was really just about getting the opportunity to get into a camp and start learning. I wouldn’t say I was disappointed, I was just excited to finally get that call [from the Chargers]. Once you get that call, you don’t really care about whether you were drafted or not.

ICYMI: @TyrellWilliams_ went deep for a first down

BG: You came out of high school 170 pounds and left college well above the 200 mark. What changed? Were you simply a late bloomer?

TW: I played a bunch of sports in high school and never really focused on playing college football. I thought about basketball and football. I redshirted my first year in college and didn’t really figure out that I needed to be stronger. But the next year I actually played and I remember feeling like I needed to hit the weight room in order to get stronger and faster. Our strength coach [Cori Metzgar] helped me a lot and made me understand I needed to be stronger, so I put on a bunch of weight going into my [third] season. I could just tell that it was a big advantage to play strong and big and use my size, because I was skinny.

BG: So when you went home to Salem for summer break, were people blown away by the suddenly jacked-up version of Tyrell Williams?

TW: Yeah, because I was definitely the skinniest kid growing up, so when I started putting on weight I’d go home and see friends from high school and they’d take notice. I’m still not too big, but you could definitely tell I’d been finally hitting the weight room.

BG: Your bother R.J. also played football at Western Oregon. You guys lived and played together there, but he went there first. Did he pave the way for you?

TW: That was big, because I went to an Oregon State football camp coming out of high school and they asked me to commit as a preferred walk-on. But other than that, I hadn’t talked to any schools at all — not D-II or anything. I hadn’t talked to anybody, and Western Oregon was the only school [to extend a scholarship]. I think that was because my brother was there.

BG: So your career might never have taken off without your big bro.

TW: Exactly. He was able to talk to coaches for me, and he’d take film from me and pass it along. It definitely opened the door for me.

BG: You had a chance to participate in the Oregon State Pro Day as a receiver for Sean Mannion. He was the primary focus and ended up being drafted in the third round, but that exposure must have been huge for you.

TW: Yeah, I planned on doing a Pro Day at my school and assumed there’d be a few scouts there. But going to a bigger school and working out in front of all the teams with Sean and other big-time prospects was big. I ran track in high school and college, so I treated it like a track meet. My mindset was to outperform everybody who was out there. I wanted to run the fastest 40, jump the highest, everything, so that there’d be no doubt in their minds that I’m there athletically.

BG: So fast forward a couple months. You go undrafted, but get that shot with the Chargers. Did you hear from any other teams after the draft?

TW: No, I didn’t personally talk to any. I know my agent had a couple phone calls with some, but San Diego was the only team that I talked to that really wanted me in for training camp.

TW: The stress isn’t there. You just go to practice and try to get better with your routes. But as far as game-planning, you’re not really focused in as much as you are when you’re on the active roster. But I still tried to use it to my advantage every day, especially going up against guys like [Jason] Verrett and [Brandon] Flowers. It was helpful for me, because I needed that year to work on stuff like getting off the ball if they’re pressing, getting open and running man-to-man routes.

BG: You did get a chance to play late that year, and your first career catch was an 80-yard touchdown. That must have felt like a dream.

TW: I still look back and it’s indescribable and unreal. It was an awesome feeling. Unfortunately, we still lost the game, but that was the go-ahead touchdown at the time. To catch your first pass and it goes for a touchdown? Definitely one of the best moments of my sports career.

BG: What about your game has improved the most from Year 1 to Year 2?

TW: Coming off my rookie season, I just wanted to focus on route-running and getting out of breaks, because I’m a taller guy so that can be harder for me. I think that’s where I improved the most — just being able to run full speed and still get in and out on a short go route and use that separation if it’s just man-to-man. And a lot of NFL corners are long and strong and use their hands at the line of scrimmage, so working to get separation at the line of scrimmage was a big thing I tried to work on.

BG: It must be paying off, because you’re well on your way to a 1,000-yard season and you’ve become a key starter there. Yet you’ve played through a sprained knee and a torn labrum. Are you Superman?

TW: It was always my dream to play in the NFL and coming in undrafted, I just feel like I can’t miss a game. I don’t want to miss a game, so if I can play through the injury, I’m gonna do it. Besides, once you get out there and into the flow, you don’t feel it as much.

TW: When people recognize me and say something, it’s usually about fantasy football. I didn’t even think about that too much until I started having success, but I think it’s what a lot of people focus on. It’s cool, because I always played fantasy football growing up. I remember always having [Chargers teammate] Antonio Gates on my team. So it’s definitely weird and different, but I appreciate it, and it definitely puts it in perspective for me how many people play fantasy football.

BG: Must also be crazy seeing yourself in Madden.

TW: Yeah, I made sure I got the game last year because I was on the active roster at the start of the season. I’ve been a huge Madden player my whole life, so being able to see that was pretty surreal. That was probably one of the biggest things I thought of when I first made the team: ‘Damn, I’m gonna be in Madden!'”

BG: You had to make yourself a starter, right?

TW: Had to, even though my rating was real low.

BG: I think it’ll be a lot higher next year.

BG: I like to ask this of everyone I interview. What’s the best thing that’s ever happened to you?

TW: I had a couple ACL surgeries when I was real young, and I think that kind of jump-started me. It gave me a new attitude: Something bad happened, but you can just put it behind you and keep working from there and still have success. It kind of taught me to be tough and get through things. Because football has always been the No. 1 thing that I love, so having that taken away when I was little was a big thing for my life. It really helped me put things in perspective and learn to not let things bring me down.

BG: How old were you when you tore your ACL?

TW: Fifth grade. I injured it in practice. I had to see a special doctor to do the surgery because I was still growing.

BG: I was going to ask you to give me the worst thing you’ve been through, but I almost feel as though that works for both.

TW: Yeah, I think it works for both, because at the time it was the worst.